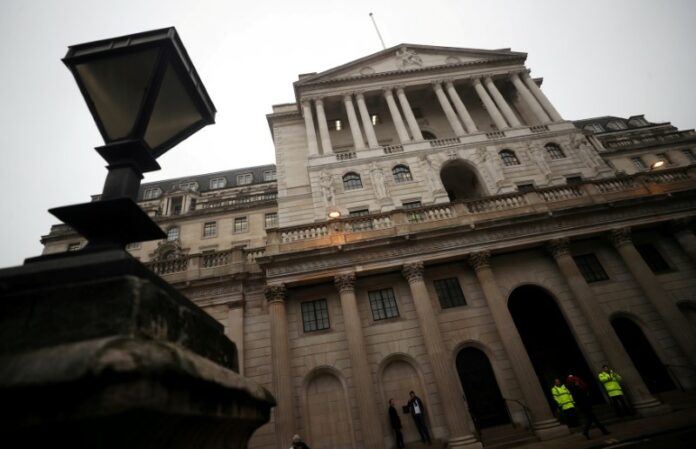 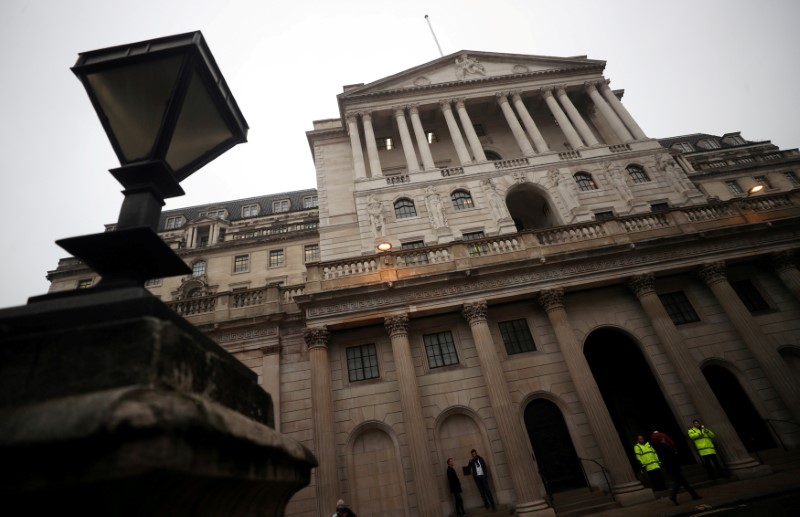 © Reuters. FILE PHOTO: The Bank of England is seen in London

LONDON (Reuters) – The Bank of England said on Thursday it could start to sell the nearly half trillion pounds of assets it bought to boost the economy sooner than previously thought, though analysts said a reduction still looked years away.

Like other central banks, the BoE amassed huge sums of government bonds bought with newly created money to spur economic growth after the financial crisis, but a decade later they are now working out how to unwind this stimulus.

While the U.S. Federal Reserve has already started this process, the BoE still maintains a 435 billion pound ($576 billion) target for its stock of British government bonds bought through this stimulus, known as quantitative easing (QE).

It also holds 10 billion pounds of corporate bonds that it purchased to help the economy through the shock of the 2016 Brexit vote.

The BoE now says it plans to wind down its asset purchases when interest rates reach around 1.5 percent, compared with previous guidance of around two percent.

Earlier on Thursday it left rates on hold at 0.5 percent, but many economists think a rise to 0.75 percent is likely in August after chief economist Andy Haldane voted for a rise.

“It’s quite a strong signal that they believe now is the now is the time to start thinking about policy normalization,” Jason Simpson, fixed income strategist at Societe Generale (PA:), said.

The changed guidance reflects the BoE’s belief that it can cut interest rates closer to zero than it thought possible a few years ago, based on its experience after the Brexit vote when rates fell to a record low 0.25 percent.

Though some policymakers had mooted this before, Thursday marks the first time the Monetary Policy Committee as a whole agreed that 1.5 percent was an appropriate level of Bank Rate at which to consider reversing QE.

Before it starts to reverse QE purchases, the BoE wants to ensure it has sufficient margin to cut rates if the economy sours – though on Thursday it also noted that it could undo future QE sales with fresh purchases if needed.

The BoE said unwinding its balance sheet would take place over “a number of years at a gradual and predictable pace”.

Although analysts expressed surprise that the BoE decided to publish the new guidance, they said any reduction in the BoE’s balance sheet could be years away.

JPMorgan (NYSE:) economist Allan Monks thought it could be around early 2020 until the process starts, and a Reuters poll shows economists do not expect rates to exceed 1.0 percent next year.

The BoE also said it could make extra reserves available to banks through its regular repo operations to counterbalance any reduction through its sale of gilts.