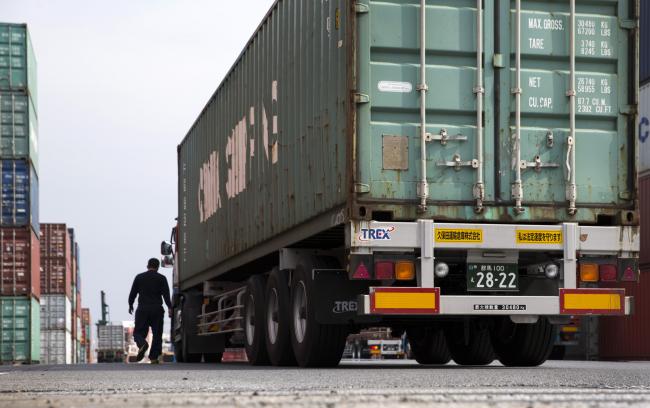 China Accuses U.S. of Trade `Abuses’ as India Strikes Back

© Bloomberg. A driver walks past a China Shipping Container Lines Co. container at a shipping terminal in Tokyo, Japan.

(Bloomberg) — Global trade tensions deepened Thursday with China reiterating it will hit back if the latest tariff threats from Donald Trump materialize, while India followed the European Union in slapping retaliatory levies on U.S. goods.

China is “fully prepared” to respond to any new list of U.S. tariffs, according to a commerce ministry spokesman, who said the nation will use a combination of quantitative and qualitative measures. Trump on Monday evening ordered up identification of $200 billion in Chinese imports for additional tariffs of 10 percent — with another $200 billion after that if Beijing retaliates.

India raised tariffs on a slew of items in retaliation for the U.S. imposing higher levies on some products shipped from the South Asian nation, echoing steps taken by China, the European Union and other trading partners. The import duty on chickpeas and bengal gram, or chana, has been increased to 70 percent and will take effect from Aug. 4.

“We’re trying to defend ourselves against their bad practice; they’re screaming and yelling — they’ve been spoiled for many, many years and that game is over,” Ross said in an interview on Bloomberg Television. “We’re going to fix the problem of protectionism around the world and we’re going to fix it by making it more painful for those countries to do bad practices than to do the right thing, which is to lower the trade barriers and lower their tariffs.”

The benchmark Chinese stock index sank 1.4 percent on Thursday, falling for fifth day out of the last six, and other emerging markets also declined, while the dollar strengthened. The main European equity gauge, already under pressure in the wake of Daimler AG’s cut to its profit outlook, headed lower and futures on the S&P followed suit.

“If protectionism cements its role in one or two big nations, we will see massive reallocation of resources in an inefficient way,” said Raymond Yeung, chief greater China economist for Australia & New Zealand Banking Group Ltd. in Hong Kong. “World growth will be affected.”

Case in point: Daimler AG (DE:) late Wednesday slashed its earnings outlook for the year, saying fewer Chinese consumers will buy Mercedes-Benz SUVs because of tariffs Beijing is slapping on autos imported from the U.S.

“Changes in trade policy could cause us to have to question the outlook,” Federal Reserve Chairman Jerome Powell said during a panel discussion at a European Central Bank conference in Sintra, Portugal. “For the first time, we’re hearing about decisions to postpone investment, postpone hiring.”

The European Union this week triggered the first phase of retaliation against the U.S. over its metal-import tariffs imposed on national-security grounds, making good on more than three months of threats to hit American goods with tit-for-tat levies.

Japan has reserved the right to respond too, although it hasn’t yet. Canada’s retaliatory measures begin on July 1, and Mexico and other nations have also announced they will respond.

“The U.S. abuses tariffs to trigger trade wars everywhere around the globe and that will severely damage the world trade order, hurt the interests of trading partners, and also hurt its domestic companies and people,” Ministry of Commerce spokesman Gao Feng said at a regular briefing in Beijing on Thursday. The U.S. always uses “other nations as scapegoats for their own problems,” he said.

The Trump administration this week ratcheted up its accusations that China’s trade and intellectual property practices are threatening U.S. economic interests. The two nations are locked in a worsening cycle of retaliation on trade, with no public sign that negotiations are still happening. Both sides have promised to impose tariffs early next month on billions of dollars in goods.

China had negotiated on agriculture and energy in early June and planned to negotiate on manufacturing and services, Gao said, adding that previous negotiations were in a “positive, constructive” manner.