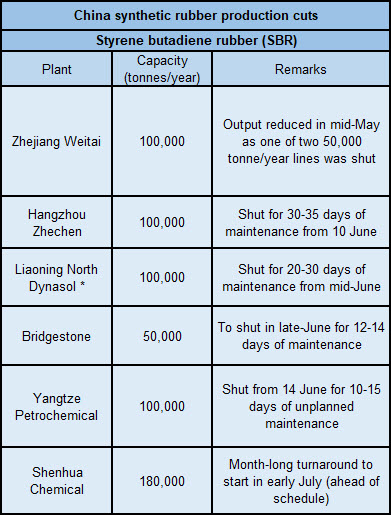 Chinese petrochemical major Sinopec has been cutting its offers, with the cumulative price reduction so far this month at CNY1,000/tonnes.

From early April to 24 May, spot prices of BD had risen by 31% because of tight supply, exceeding those of downstream styrene butadiene rubber (SBR) and polybutadiene rubber (PBR) products.

Strong cost pressures forced the shutdown of some of the downstream facilities since May, particularly those without upstream BD production, while some have decided to bring forward scheduled maintenance at their plants. 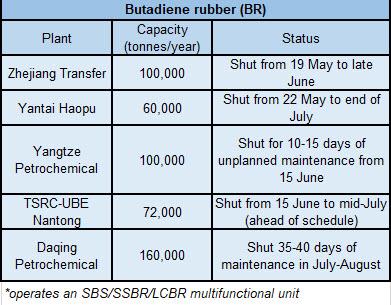 Asia’s BD prices had also spiked from early April , deterring Chinese buyers from tapping the spot import market for cargoes. The country is a major importer of BD.

SBR and PBR prices could not keep up with the spikes in BD costs in the previous two months due to limited demand in the downstream tyre industry, which will go into a lull period in July and August.

Production cuts among tyre manufacturers in Shandong province, as well as disruptions to logistics, ahead of and during the Shanghai Cooperation Organisation (SCO) summit in Qingdao on 9-10 June also weighed down synthetic rubber consumption.

Traders and local producers in China of BD continued to have limited stocks due to a heavy turnaround season in the second quarter, but demand has substantially weakened.

In the first quarter, downstream buyers had not stocked up on feedstock BD ahead of the June-quarter turnaround season, on initial expectations that CNOOC and Shell Petrochemicals Co’s (CSPC) new 180,000 tonne/year BD unit would start up in mid-February to March but this failed to materialize.

The plant started up in late-April but operations have remained unstable.

“We had been overly optimistic about the BD supply and found it hard to secure either domestic cargoes nor imported volumes recently,” a rubber producer said.

Picture: Inside a tyre factory in China’s Anhui province. Butadiene (BD) is a raw material for the production of synthetic rubbers such as styrene butadiene rubber (SBR) and polybutadiene rubber (PBR), which go into tyres for the automotive industry. (Source: VIEW CHINA PHOTO/REX/Shutterstock)