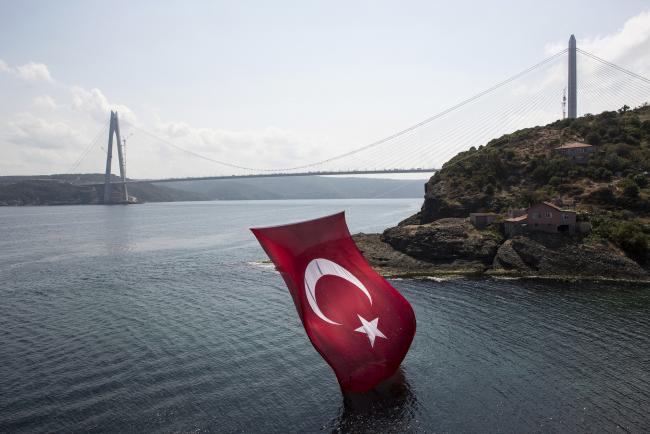 © Bloomberg. A Turkish national flag hangs above an inlet on the Bosporus strait near the newly opened Yavuz Sultan Selim bridge in Istanbul, Turkey, on Monday, Aug. 29, 2016. Turkish President Recep Tayyip Erdogan has demanded that lenders cut mortgage rates to an annual rate of about 9 percent from the market average of around 13.7 percent as he seeks to shore up the economy following the failed coup last month. Photographer: Kerem Uzel/Bloomberg

(Bloomberg) — Emerging market assets have been beaten up lately, but many of their fundamentals are still in good shape, and their local bonds are a buy, Goldman Sachs Group Inc (NYSE:). strategists say.

The narrative on developing nations appears to have done a 180 in recent weeks, from one of resilience to Federal Reserve tightening in the first quarter to vulnerability in the current one. Yet aside from countries such as Argentina and Turkey that have had particular economic challenges, as a group, developing nations look “sound,” Goldman says.

“Under our base-case scenario of stable and above-trend global growth as well as a still-gradual Fed, the U.S. dollar should weaken versus both G10 and EM exchange rates,” Zach Pandl and Kamakshya Trivedi, Goldman strategists in New York and London, wrote in a note Wednesday. “From a broad ‘beta’ standpoint we prefer non-dollar assets — especially local EM fixed income.”

Current-account balances are healthy in emerging markets, though they have deteriorated in recent quarters, and the market selloff has given the group a greater carry, the Goldman pair wrote, referring to the benefit of a wider yield differential. Countries including Brazil, Indonesia, Mexico and South Africa have narrowed current-account deficits since 2013, IMF data show.

In views for the second half of 2018, the Goldman strategists’ picks included:

The main theme for Goldman is that when the global economy does well, the dollar tends to underperform, and the analysts see a recent deceleration as having “mostly run its course.” The second quarter saw the U.S. outperform as tax cuts kicked in.

Among the recommendations, Goldman said the “Andean trio” of currencies above are attractive as they’ve lagged behind improvement in commodity prices, and have largely put political risks behind. The Canadian and Australian dollars should benefit from growth momentum, improving terms of trade, and the outlook for their monetary policy, Goldman said. The rand is the “preferred candidate” among higher-yielding currencies.

Upcoming elections in Brazil and Mexico leave Goldman shy of the real and peso, with “political clarity required to unlock” value in the currencies. While value has been “recreated” in emerging-market dollar debt thanks to the recent sell-off, the bank preferred local-currency fixed income, it said.