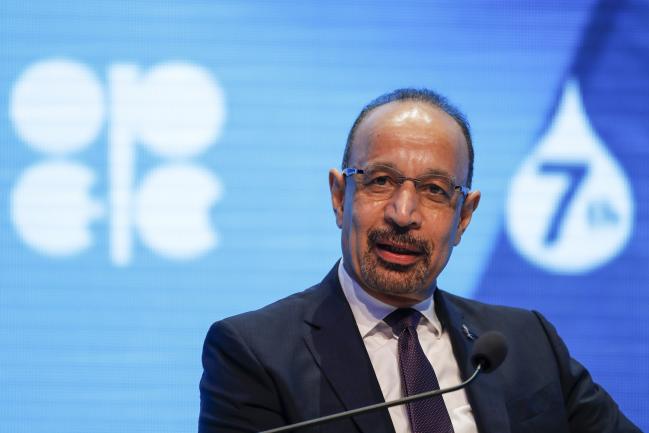 &© Bloomberg. Khalid al-Falih, Saudi Arabia’s energy minister, speaks during day two of the 7th Organization Of Petroleum Exporting Countries (OPEC) international seminar in Vienna, Austria, on Thursday, June 21, 2018. The odds of OPEC reaching an oil-production deal increased as Iran edged away from a threat to veto any agreement that would raise output and Saudi Arabia put forward a plan that would add about 600,000 barrels a day to the global market. Photographer: Stefan Wermuth/Bloomberg

(Bloomberg) — With fewer than 24 hours to go before a pivotal OPEC meeting, Saudi Arabia was pushing for a significant boost to oil supply as opposition from arch-rival Iran showed signs of wavering.

The intensive negotiations between ministers in Vienna this week are the culmination of a process that has whipsawed oil markets for weeks. Saudi Arabia and Russia’s desire to roll back production cuts has encountered fierce opposition from Iran and Venezuela, while U.S. President Donald Trump has lobbed the occasional rhetorical bomb at the cartel from the sidelines.

The odds of the Organization of Petroleum Exporting Countries reaching a deal on Friday have increased through the week. Iran has edged away from a threat to veto any agreement that would raise output, while Saudi Arabia has put forward a plan that would add 600,000 barrels a day — about 0.5 percent of global supply — smaller than the 1.5 million increase Russia proposed.

“We’re not going to allow a shortage to materialize to the point that markets will be squeezed and consumers will be hurt,” Saudi Energy Minister Khalid Al-Falih said Thursday. “One thing you can be assured of is we will be responsive, we will release supplies to make sure there’s no shortage.”

If the Saudi position prevails, it would allow OPEC and its allies to partially offset the impact of the collapse in Venezuela’s oil industry and feed fast-growing demand — two factors that played a big part in crude’s surge to above $80 last month.

After a day of diplomatic back-and-forth, ministers were increasingly positive on Thursday that a deal was in reach.

“We are making good progress,” said United Arab Emirates Energy Minister Suhail Al Mazrouei, who also currently holds the position of OPEC president. “This is a very good meeting. We are optimistic.”

He was echoing comments from his Iranian counterpart, Bijan Namdar Zanganeh, who had rejected any production increase when he arrived in Vienna on Tuesday, saying OPEC shouldn’t be doing Trump’s bidding. After sitting down with several counterparts and speaking to Russian Energy Minister Alexander Novak by phone on Wednesday, the minister softened his tone considerably, saying he was optimistic about the outcome of the meeting.

The only route to a production boost that Iran has publicly suggested — allowing the handful of countries that have voluntarily cut deeper than necessary to restore some output — would deliver far less extra oil to the market than the Saudi proposal.

The Saudi proposal involves a complex calculation based on how much the group has cut production beyond the initial target of 1.8 million barrels a day set in 2016, said delegates, asking not be named discussing private meetings.

The kingdom and its allies estimate that total cuts now amount to 2.8 million barrels a day. Their proposal would share out a quota increase of 1 million barrels a day between all members of the group. In reality, because many countries that have cut the deepest can’t increase production, that would probably translate to just 600,000 barrels a day of crude flowing back on to the market.

The convoluted plan shows the difficulty Saudi Arabia has in bridging the gap between the competing interests of different members. The proposal has yet to win the backing of all OPEC members, and may also meet resistance from Venezuela, Algeria or Iraq — nations which have limited scope to increase production.

“We’re in comprehensive talks with all ministers, especially Saudi Arabia and Iran,” Iraq’s Oil Minister Jabbar al-Luaibi told reporters on Thursday. “We are trying to narrow the gap between the two and we hope that this afternoon reach some sort of good compromise.”

Trump’s involvement in pressing for OPEC to act — which in addition to his tweets include a behind-the-scenes request for a 1 million-barrel-a-day supply hike — could make it difficult for Tehran to accept a compromise. Zanganeh has said the U.S. president is to blame for high prices because of his unilateral withdrawal from the international nuclear agreement.

Still, Zanganeh told reporters that he was willing to have further discussions about production numbers on Thursday, when he will join a meeting of countries — including Russia and Saudi Arabia — that oversee implementation of the production cuts.

The outcome of that meeting could give oil users around the world a strong indication as to whether they face the prospect of rising prices later this year — possibly as high as $100 a barrel — or more plentiful supply that would ease the cost of gasoline and diesel.

“The most important thing is the consumers,” said Saudi Arabia’s Al-Falih. “Consumers are asking for more supply in the second half when demand is rising”