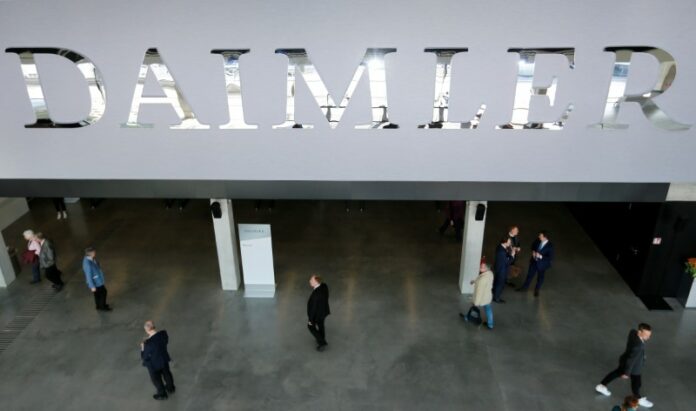 © Reuters. FILE PHOTO – The Daimler logo is seen before the Daimler annual shareholder meeting in Berlin,

By Philip Blenkinsop and Edward Taylor

BRUSSELS/FRANKFURT (Reuters) – Mercedes-Benz maker Daimler (DE:) shocked investors on Thursday with a warning that trade tensions would hit sales, while fears of a “tit-for-tat” trade war grew as Europe readied retaliatory tariffs against the United States.

Auto stocks sank to a nine-month low on European markets () after Daimler cut its 2018 profit forecast and German rival BMW (DE:) said it was considering “possible strategic options” in light of the rising trade tensions between China and the United States.

BMW, which also exports vehicles from the United States to China and Europe, reaffirmed its profit forecasts for this year but said these depended on worldwide political conditions staying largely unchanged.

Trump is separately promising to impose tariffs on up to $200 billion of Chinese goods, escalating a conflict that has already drawn retaliatory steps from nearly all corners of the world. China for its part has warned it will retaliate with levies on U.S. products, potentially including the Mercedes-Benz SUVs shipped to China from Alabama.

Daimler’s warning comes a day after top central bank chiefs said a developing trade war between the world’s biggest economies was weighing on business confidence and could force central banks to downgrade their forecasts.

Meeting in Portugal, the heads of the U.S. Federal Reserve, the European Central Bank, the Bank of Japan and the Reserve Bank of Australia on Wednesday all took a gloomy view on the conflict, arguing the consequences were already evident.

“Changes in trade policy could cause us to have to question the outlook,” Fed Chair Jerome Powell said in some of his strongest remarks yet on the issue.

Mario Draghi, head of the European Central Bank (ECB), said it was too early to assess the monetary policy impact of an escalation in trade tariffs between the United States and its partners but there was no reason for optimism.

China’s commerce ministry on Thursday accused the United States of being “capricious” over bilateral trade issues, and warned the interests of U.S. workers and farmers ultimately will be hurt by Washington’s penchant for brandishing “big sticks”.

“It is deeply regrettable that the U.S. has been capricious, escalated the tensions, and provoked a trade war,” commerce ministry spokesman Gao Feng said. “The U.S. is accustomed to holding ‘big sticks’ for negotiations, but this approach does not apply to China.”

The EU meanwhile prepared to impose 25 percent duties on 2.8 billion euros ($3.2 billion) of U.S. imports from Friday, retaliatory measures that could escalate into a full trade war if Trump carries out his threat to penalize European cars.

The bloc will begin charging import duties of 25 percent on a range of U.S. products, including steel and aluminum products, farm produce such as sweetcorn and peanuts, bourbon, jeans and motor-bikes.

Tariffs imposed on the EU by Trump go against “all logic and history” and the bloc will do what is required to rebalance transatlantic trade, EU Commission President Jean-Claude Juncker said in an address to the Irish parliament.

“Our response must be clear but measured,” he said.

The EU move was a response to U.S tariffs imposed on EU steel and aluminum early this month.

The bloc has said it will remove them if Washington exempts EU producers from its metals tariffs, although that looks unlikely given a new U.S. investigation that could lead to tariffs on cars by the end of the year or early in 2019.

The EU previously offered Washington the prospect of discussions to cut duties on industrial goods, including cars. EU trade chief Cecilia Malmstrom said on Thursday the EU was open to talks to resolve the trade dispute.

In Paris, ECB policymaker Francois Villeroy de Galhau said the bank was confident inflation is on the right track although the specter of protectionism and other risks were adding to broader economic uncertainty.

Speaking at a conference at the French central bank which he also heads, Villeroy said “the risk of an escalating and global trade war is no longer unthinkable” following tit-for-tat tariff measures announced by the United States and China.

Click here for a graphic on trade war risks.

Click here for a story outlining what is at stake in a trade war.

Equity markets have been relatively resilient in the face of mounting trade concerns but fell broadly this week as Trump threatened additional tariffs on Chinese goods.

Daimler said import tariffs on cars exported from the United States to China would hurt Mercedes-Benz car sales, resulting in slightly lower earnings before interest and taxes this year.

Slower sales of SUVs from the Mercedes-Benz plant in Alabama to China will result in a hit of around 250 million euros ($289 million), Evercore ISI analysts said.