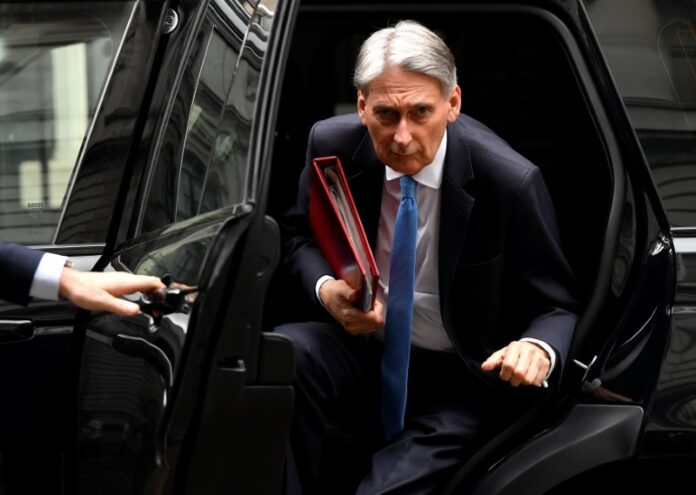 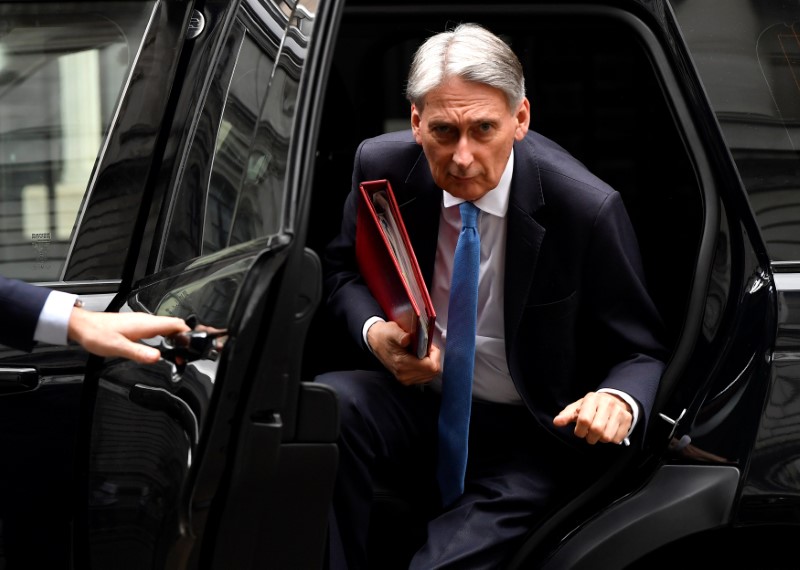 © Reuters. Britain’s Chancellor of the Exchequer Philip Hammond arrives back in Downing Street in London

LONDON (Reuters) – Britain’s government borrowed less than expected last month, according to official data on Thursday that may cheer finance minister Philip Hammond but also increase pressure on him to spend more after years of deficit reduction.

Public sector borrowing fell in May to 5.0 billion pounds ($6.6 billion), compared with 7.0 billion pounds a year ago, the Office for National Statistics (ONS) said, at the bottom end of the range of economists’ forecasts in a Reuters poll.

So far this financial year, the deficit totals 11.8 billion pounds, 26 percent less than in April-May 2017, though it is rarely possible to get a good steer on full-year borrowing trends this early in the tax year, which starts in April.

The figures are likely to please Hammond, who in a speech later on Thursday intends to reaffirm his goal of lowering public debt despite a big rise in health spending announced by Prime Minister Theresa May earlier this week.

“If the economy holds up as we expect, borrowing is likely to undershoot the Office for Budget Responsibility’s forecast by a more significant margin in subsequent years,” Andrew Wishart of consultancy Capital Economics said.

“This would allow the chancellor to deliver the recently promised increase in health spending over the next five years while still meeting his fiscal target.”

This was the lowest annual budget deficit as a share of GDP since 2001/02 and the borrowing is only for long-term investment, not day-to-day spending.

The deficit stood at 9.9 percent of GDP when finance minister Philip Hammond’s predecessor, George Osborne, took power in 2010 in the wake of the global financial crisis and started a multi-year program of public spending cuts.

In March, Britain’s Office for Budget Responsibility said it expected the shortfall between how much the government spends and how much it earns from tax revenues to fall to 37.1 billion pounds this year, or 1.8 percent of GDP.

Hammond must now fund the start of a 20 billion pound a year increase in spending on England’s National Health Service, which May said on Monday she wanted to phase in over the next five years.

On Thursday, the Financial Times reported that defense minister Gavin Williamson had been asked by May to justify the high levels of military spending needed to keep Britain as a ‘tier one’ military power.

May said some money for health spending would come from savings on EU membership contributions after Brexit, but other funding would need to come from higher taxes or more borrowing.

The OBR has estimated that Brexit will be a net drain on Britain’s public finances, not a benefit, and in speech extracts released on Thursday, Hammond made no reference to a Brexit dividend and was clear the tax burden would need to rise.

He will also reaffirm his commitment to existing fiscal targets.

Hammond wants a budget surplus by the mid-2020s, in order to cut the national debt faster, as he believes debt as a share of GDP is too high to easily support a big rise in spending during a future deep recession.

Public debt, including a temporary Bank of England lending scheme, stood at 1.781 trillion pounds, or 85.0 percent of GDP, down from 85.4 percent of gross domestic product in May 2017 but still more than double its level before the financial crisis.