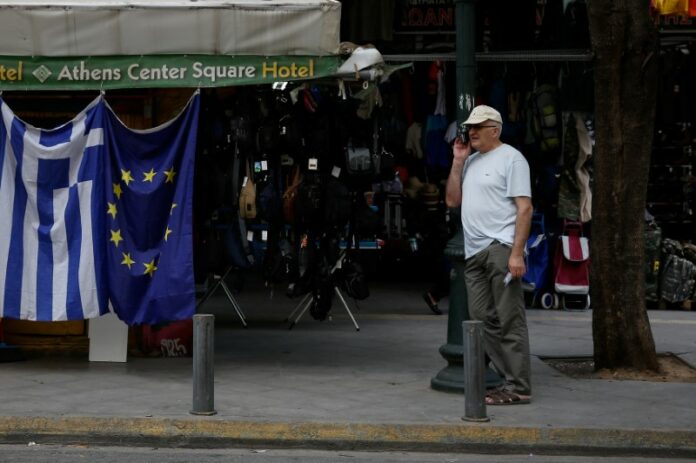 Deal on debt? Jaded Greeks ask what’s in it for them 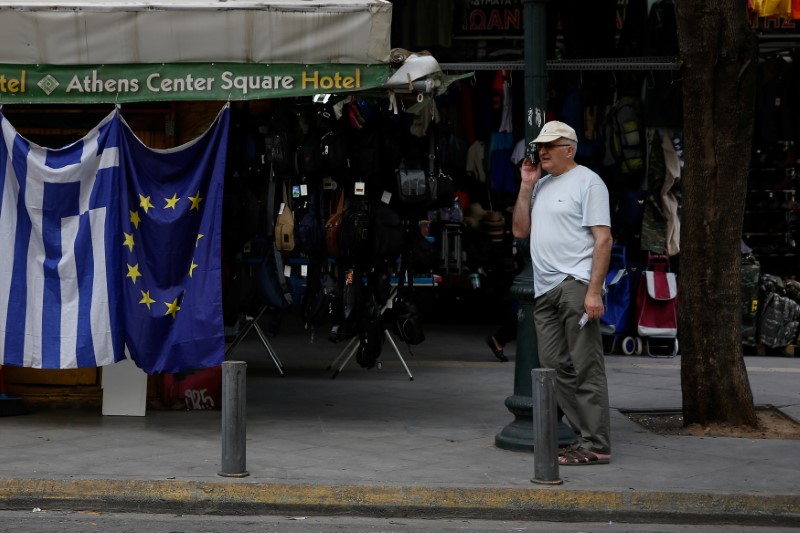 © Reuters. A man stands next to a kiosk selling Greek and EU flags in Athens

ATHENS (Reuters) – Greeks were unimpressed by a debt relief package from euro zone finance ministers on Friday, jaded by years of austerity which has pushed a third of the population into poverty and shredded the government’s popularity.

Greece has relied on loans from euro zone governments in three bailouts since 2010 in turn for painful reforms, including pension cuts and tax hikes, which have shrunk the economy by a quarter and had sent unemployment to record highs.

Euro zone finance ministers sealed a deal in the early hours of Friday to extend maturities and defer interest rates on a big chunk of loans to Greece, the most indebted country in the euro zone.

But the mood on the streets of Athens was cautious on Friday.

“Our life will continue to be the same, our young people will (continue) to emigrate abroad, the rights of the elderly will be trampled on,” said Elvis Papanikolas, 28, a tourism sector employee.

“… this situation will continue with half of Greeks taking medication or committing suicide, and the other half unemployed,” he said.

About 40 percent of young people are out of job, leading to the immigration of about 400,000 Greeks over the past decade.

After a deep depression, Greece’s economy is slowly showing signs of recovery. The economy was poised to grow by about 2 percent in 2018, but ordinary people are still having trouble paying their bills.

“The debt relief is definitely a good thing for Greece but it will take time for any positive effect to be reflected in the real economy,” said Anastasios Zois, 74, a pensioner.

Greece is exiting its third international bailout in August but despite hundreds of reforms requested by its creditors already being completed, investors still need to know the country will be able to service a debt load worth of 180 percent of gross domestic product.

Athens will also get a new 15 billion euro loan, giving it a total cash buffer of 24 million euros which will help cover its financing needs for some 22 months.

Many Greeks were unfamiliar with terms of the deal, focusing more on the palpable impact of bailouts on their pockets.

But with more pension cuts and tax hikes already legislated for in 2019 and 2020 so that Athens keeps its finances on track, Greeks won’t expect their finances to improve anytime soon.

Prime Minister Alexis Tsipras’s left-right coalition has a fragile parliamentary majority and is trailing the conservative opposition by double digits in opinion polls.

Tsipras on Friday hailed the decision by euro zone’s creditors to offer debt relief, saying it marked a definitive turn of the crisis-hit country away from a relentless cycle of austerity.

However, the resigned public response suggests the debt may not give much impetus to the government’s hopes of being reelected in a general election due by October 2019.

“What we have here is one more dose of medicine for the patient,” said Alexis Kalambokis, 28, who works at leather goods shop in central Athens.

“I don’t think that the country’s economic situation will change much.”