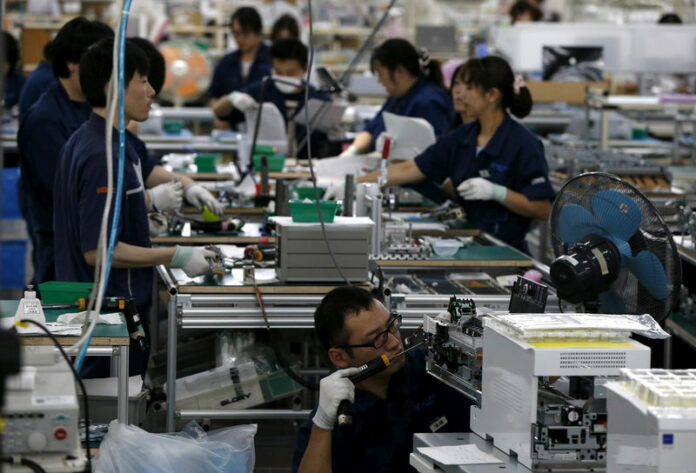 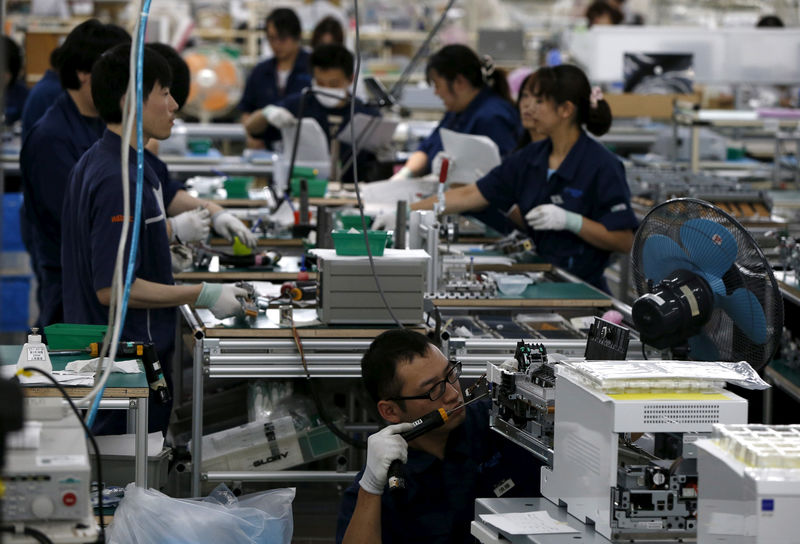 © Reuters. FILE PHOTO: Employees work an assembly line at a factory of Glory Ltd., a manufacturer of automatic change dispensers, in Kazo, north of Tokyo

LONDON (Reuters) – A rare synchronized expansion among major world economies that was cheered on by markets and policymakers may be already unraveling, with only the near-term prospects for the United States looking significantly better.

There is plenty of optimism around, however, and frequent use of “soft patch” to describe recent dull performance – a phrase often employed by central bankers needing to explain why they are looking past an uncomfortable set of data.

So while 2018 may still turn out to be a very good year for the global economy for overall growth, and certainly for the United States, President Donald Trump’s “America First” policies on trade suggest trouble is ahead for everyone else in the second half.

Euro zone growth, while decent, has slowed remarkably, posing a challenge to the European Central Bank’s plans to soon stop buying bonds. Central banking sources revealed this week to Reuters a worry at the bank about “a facade of optimism in the forecasts.”

Growth in Britain, where the government is grappling with the rather complicated task of leaving its biggest trading partner the European Union, has stalled, forcing the Bank of England to abandon plans to raise interest rates last month.

China, the powerhouse behind global growth rates in recent years and now locked in a trade spat with the United States, looks to be slowing, and may even be in need of stimulus later this year.

But the global economy performing more raggedly close to half-time for 2018 should not have come as a complete surprise.

Three-quarters of more than 250 economists across the globe surveyed by Reuters in April identified a tit-for-tat escalation of trade tensions between the United States and China as the number one threat to the world economy this year.

They have been consistently warning about protectionism ever since President Trump was sworn in to office.

Even Federal Reserve Chair Jerome Powell this week showed concern about the shake-up in trade policy.

“For the first time we are hearing (from business leaders) about decisions to postpone investment, postpone hiring, postpone making decisions,” he said.

But while the potential pitfalls have been laid bare and the tariffs being erected now suggest those risks are uncomfortably close to becoming reality, most traders in financial markets, as ever, would prefer for the good times to keep rolling.

“It is fair to say that global financial markets outside of emerging market assets remain complacent about the risk of a full-blown trade war,” wrote strategists at Societe Generale (PA:).

Indeed, emerging markets have taken a beating in recent weeks. Run-of-the-mill investment strategy has scrambled to line up behind the view that for now, one should favor developed markets and bid up the U.S. dollar.

And while Wall Street has wiped out the modest gains it made this year, analysts note that developed markets are surprisingly unscathed, especially given the United States is now caught in trade spats with natural allies like the EU and Canada.

One thing seems clear, however. How long a remarkably positive stretch for the world economy will last depends much more now on positive sentiment than it does on stimulus, as well as on the fortunes of one country.

Ajay Rajadhyaksha, head of macro research at Barclays (LON:), notes that on the whole, little has changed in their global outlook apart from being more dependent on the United States. They still forecast close to 4 percent global growth this year and next.

The current U.S. economic expansion, already the second longest on record, has been given extra fuel in the form of major tax cuts, which will help keep the chances of a major slowdown there quite low for the rest of this year.

But the chances of a recession in the next two years are just below one-in-three, according to the latest Reuters poll. And Trump’s latest tariffs, which will act as a tax on the U.S. economy, not a boost, are already taking their toll.

Barclays’ Rajadhyaksha, in a note titled “Glass half full”, recommends that clients not get carried away with bouts of negative sentiment. But they also concede that much depends on optimism about some of the world’s biggest economies.

“However, the fact that exit from the soft patch now remains a forecast for Europe, Japan and China, rather than an established feature of the data, suggests that markets may remain more susceptible to bouts of doubt about the robustness of the global expansion than they were three months ago.”