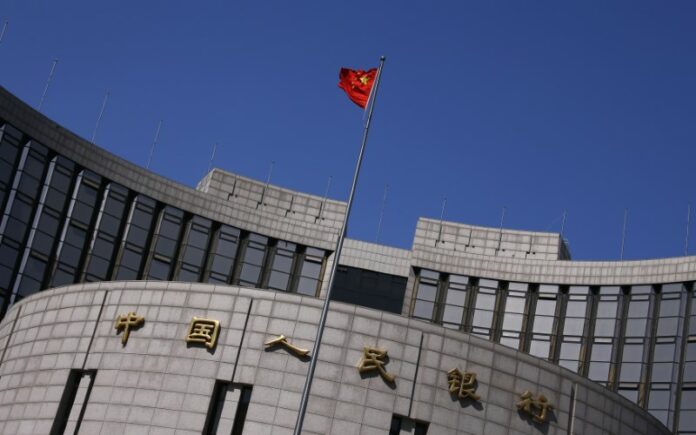 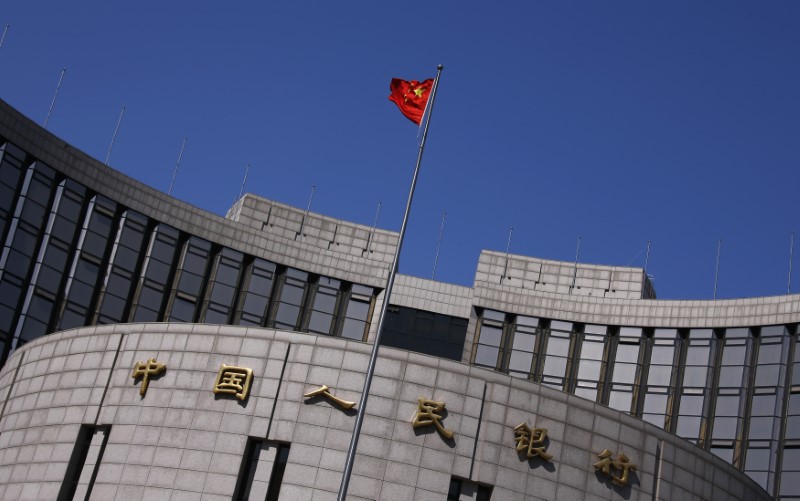 © Reuters. A Chinese national flag flutters outside the headquarters of the People’s Bank of China in Beijing

BEIJING (Reuters) – China’s central bank said on Sunday it would cut the amount of cash that some banks must hold as reserves by 50 basis points (bps), releasing $108 billion in liquidity, to accelerate the pace of debt-for-equity swaps and spur lending to smaller firms.

The reserve reduction, the third by the central bank this year, had been widely anticipated by investors amid concerns over market liquidity and a potential economic drag from a trade dispute with the United States.

But the 700 billion yuan ($107.65 billion) in liquidity that the central bank said will result from the reduction in reserves was bigger than expected.

Expectations of a cut had risen after the State Council, or cabinet, said on Wednesday monetary policy tools including targeted cuts in banks’ reserve requirement ratios will be deployed to strengthen credit flows to small firms and keep economic growth in a reasonable range.

Economists are not ruling out further reserve requirement reductions for the rest of the year as borrowing costs rise due to Beijing’s clamp-down on leverage in the financial system, a campaign now in its third year, while uncertainty over Sino-U.S. trade ties persists.

The People’s Bank of China (PBOC) said on Sunday that the latest targeted cut in some banks’ reserve requirement ratios (RRRs) – currently 16 percent for large banks and 14 percent for smaller banks – will take effect on July 5.

The PBOC said the cut will release about 500 billion yuan ($77 billion) for the country’s five large state banks and 12 national joint-stock commercial banks. Lenders are encouraged to use the money to conduct debt-for-equity swaps.

China’s policymakers have been pushing for debt-for-equity swaps since late 2016 to ease pressure on firms struggling with their debts.

The country’s top banks, controlled by the government, have rushed to sign deals with state-owned enterprises to ease their debt burden and give them time to turn around their business and improve their creditworthiness.

The latest RRR cuts will also release about 200 billion yuan in funding for mid-sized and small banks to increase lending to credit-strapped small businesses, the PBOC said.

“This move will help support the real economy and stabilize financial markets. We’ve seen rising debt defaults and funding strains on small firms, as well as a sharp adjustment in the capital market.”

The central bank said on Sunday it will keep monetary policy prudent and neutral.

Sunday’s announcement followed the worst weekly loss in the Chinese stock market since early February as fears of a full-blown trade war with the United States weighed.

The on Friday also fell to its lowest versus the dollar in more than five months, though it has remained firm against a basket of trading partners’ currencies, and a sharp depreciation is not in the cards.

The latest RRR cut is set to take effect a day before the United States and China are expected to begin collecting increased tariffs on respective lists of goods.

Fears of a full-scale trade war with Washington have magnified concerns about the outlook for the world’s second-largest economy, following weaker-than-expected Chinese growth data for May and as Beijing’s financial regulatory crackdown starts to weigh on business activity.

Net exports overall were already a drag on growth in the first quarter after giving an added boost to the Chinese economy last year, highlighting the need for sustained strength in domestic demand if significant new U.S. tariffs are imposed.

Beijing is also likely to backtrack on efforts to reduce its reliance on debt if the dispute escalates into an all-out trade war, some economists say.

The weighted average lending rate for non-financial firms, a key indicator reflecting corporate funding costs, rose 22 basis points in the first quarter to 5.96 percent, PBOC data showed. That compared with a total of 47 basis points in 2017.

Policymakers have been trying to strike a delicate balance between the need for tougher supervision and reforms and ensuring the stability of the financial system, while keeping economic growth on track.

ANZ Research said on Sunday that it still expects another 50 bps RRR cut in October.

Economists still expect China’s economic growth to slow to 6.5 percent this year from 6.9 percent in 2017, citing rising borrowing costs, tougher limits on industrial pollution and an ongoing crackdown on local governments’ spending to keep their debt levels in check.