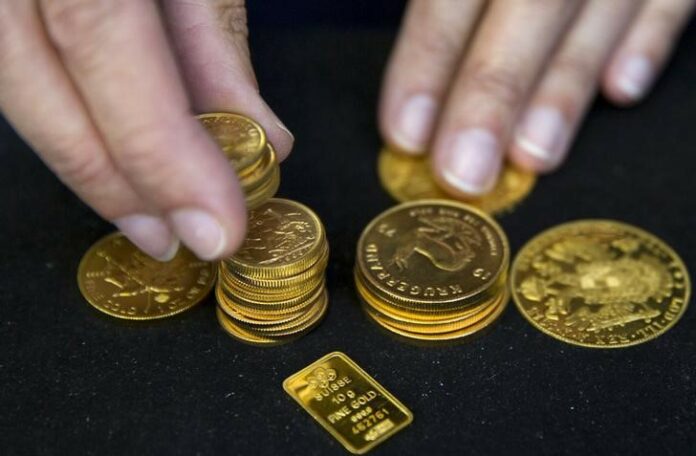 for August delivery tacked on 60 cents to settle at $1,271.10 on the Comex division of the New York Mercantile Exchange late Friday. For the week, prices were down 0.56%. Its close on Thursday at $1,267.20 was the lowest since December.

Prices of the precious metal have been pressured lower against a backdrop of rising U.S. interest rates and a stronger dollar.

Expectations for higher rates tend to be bearish for gold, which struggles to compete with yield-bearing assets when rates rise, while a stronger U.S. currency makes gold and other dollar-denominated commodities more expensive for foreign investors.

The precious metal has largely shrugged off concerns over a potential trade war between the U.S. and China that normally would bolster safe haven demand for gold.

U.S. inflation data will be in focus this week with the Federal Reserve having already flagged four interest rate hikes this year. The Fed’s preferred inflation measure; the core PCE price index is due on Friday.

The third reading on first quarter U.S. GDP is due the day before and there will also be data on durable goods orders and consumer sentiment.

Among base metals, for May delivery was slightly higher at $3.033 in late trade for a weekly decline of 3.44%.

Copper prices were pressured as trade tensions between the U.S. and China continued to escalate, fueling fears that protectionist trade policies will slow the global economy and weaken demand.

The U.S. is to release data on consumer confidence.

Atlanta Fed President Raphael Bostic is due to speak at an event in Alabama.

New Zealand is to publish data on trade and a report on business confidence.

Bank of England Governor Mark Carney is to hold a press conference about the latest financial stability report in London.

The U.S. is to release data on durable goods orders.

Fed Governor Randal Quarles is to speak at an event in Idaho.

Bank of Canada Governor Stephen Poloz is to speak.

The Reserve Bank of New Zealand is to announce its benchmark interest rate and publish a rate statement which outlines economic conditions and the factors affecting the monetary policy decision.

In the euro zone, Germany is to release preliminary data on inflation.

European Union leaders are to attend the first day of an economic summit in Brussels.

The U.S. is to release revised data on first quarter growth as well as the weekly report on jobless claims.

Atlanta Fed President Raphael Bostic is to speak in Atlanta.

The UK is to produce revised data on first quarter growth as well as figures on the current account and net lending.

The euro zone is to release a preliminary estimate of consumer price inflation.

EU leaders are to attend the second day of an economic summit in Brussels.

Canada is to release its monthly report on economic growth as well as data on raw material price inflation. The Bank of Canada is to publish its business outlook survey.

The U.S. is to round up the week with data on personal spending and the Fed’s preferred inflation measure, the core PCE price index, along with data on business activity in the Chicago region and revised data on consumer sentiment.