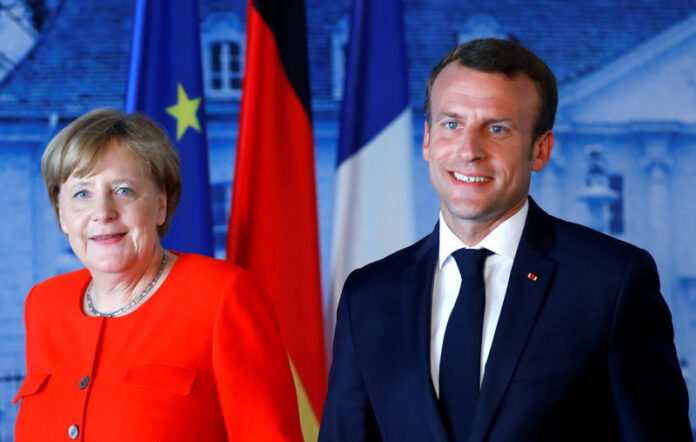 BERLIN (Reuters) – Chancellor Angela Merkel’s agreement with French President Emmanuel Macron on euro zone reforms does not violate the coalition agreement, as some Bavarian conservatives have suggested, an aide to the German leader said.

Chancellery Minister Helge Braun underscored Germany’s determination to maintain control and avoid turning the euro zone into a “debt union” in a letter to lawmakers from the parties in the ruling coalition.Merkel, locked in an escalating showdown with allies in the Bavarian Christian Social Union (CSU) over migration, has come under additional fire from CSU leader Horst Seehofer for not coordinating her euro zone agreement with his party.

In his June 22 letter, Braun said Merkel’s agreement to form a euro zone budget was in line with budgetary provisions included in the German coalition agreement signed in February.

“Liability and control, solidarity and responsibility” will remain key precepts for the euro zone, Braun told lawmakers in the letter, a copy of which was viewed by Reuters, ahead of a meeting of the coalition parties on Tuesday.

Braun said former finance minister Wolfgang Schaeuble had negotiated a road map for a European banking union in June 2016 that requires banks to reduce the risks on their balance sheets before any broader European system was put in place.

“On the basis of this guideline, we have now agreed with France to continue working to reduce risks,” he said.

Only when these efforts were deemed sufficient would a credit line be implemented for the European Stability Mechanism that could be used by the European resolution fund, he said.

ESM Managing Director Klaus Regling also backed the proposed euro zone budget in an interview with the Sueddeutsche Zeitung newspaper to be published on Monday, noting the Franco-German agreement expressly stated that “there will be no transfers.”

Braun said Germany had prevailed in its negotiations with France to ensure that aid to euro zone states should only be possible under strict conditions, and that the German parliament would continue to participate in the process.

“Every member state remains responsible for its public finances and the necessary reforms for growth and competitiveness,” Braun wrote. “We will not allow a debt union.”

Finance Minister Olaf Scholz, whose Social Democrats (SPD) are Merkel’s junior coalition partners, last week also defended the euro zone reform package, but said his party would only back the deal after it received a detailed accounting of its costs.