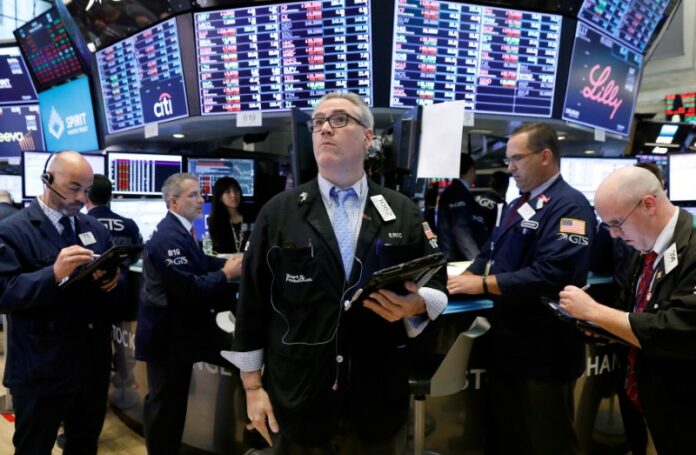 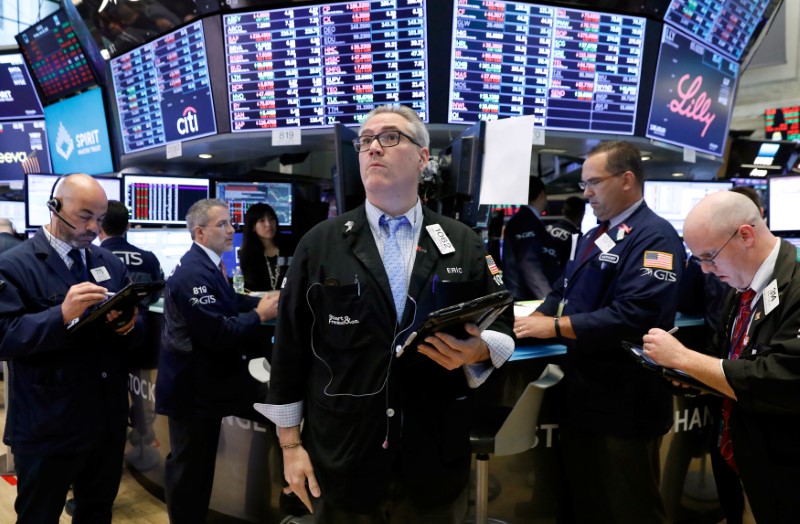 © Reuters. Traders work on the floor of the NYSE in New York City

(Reuters) – U.S. stocks sank in a broad sell-off on Monday, with the trading down more than 2.0 percent in the afternoon and technology firms bearing the brunt of an escalating trade dispute between the United States and other leading economies.

The Dow () fell 1.8 percent and the Nasdaq () was down 2.6 percent. The S&P technology index .SPLRCT dropped almost 3.0 percent and the Philadelphia Semiconductor index .SOX dropped 3.6 percent, with chipmakers taking a hit as they depend on China for a large part of their revenue.

“The things that have caused this market to not be happy at the beginning of the day have not abated at all. As a result there is no reason to think it won’t weaken into the close.

“The 50-day (moving average) was providing a little bit of support right at the get-go and then the 100-day sort of looked like it was the stop but if I am a technical guy I am worried about the 200-day now, which is frankly, a ways down there. That is 2,6664, that is not a number I want to get anywhere near. But if you look back at the pullbacks we had in early April and early May both of them didn’t really bounce until they hit the 200-day, so I would be a little cautious here.

“This is an incredibly tough market to not only forecast but also to trade because fundamentals are really strong everywhere – corporate earnings are great, labor market is great, everything is great – but you can’t trade technicals when everything is going on is being driven by news and geopolitical tensions. So how do you predict the next hour or next day what might come out of Washington? I just don’t know how you trade this thing, I don’t know how you forecast it, because you don’t know. It is a tough one. I can only forecast based on fundamentals and technicals, I can’t predict the news.

“As long as this stuff is out there and until we see somebody backpedaling, we see somebody flinch, we see some progress in negotiations which we all think is part of the game, we haven’t see any of that, I would be cautious here. I don’t like it, I hate to think this kind of stuff could derail all of the fundamental strength we have but in the near-term, it looks like it.”

“People are scared, the market does not like uncertainty. And a trade war is something that is difficult, if not impossible, to handicap. A lot of profit taking on stocks that had been leaders. Selling in the cyclical and big industrial international stocks – that’s a continuation – and until people get some clarity, it may be difficult for investors to show a lot of conviction in terms of being long.”

“The story out there today is about trade tensions with China, the latest development with regard to limiting investment in U.S. firms. We’re seeing some areas holding up reasonably well: telecom, utilities and consumer staples. Industrials and technology stocks, with their extended valuations, are the sectors that are struggling today.

“[Future market performance] depends a lot on the statements we hear from the respective parties. I don’t expect a rebound, but I don’t expect the pace of selling we’re seeing today to continue either.”

“It was a technical level the S&P broke (the 100 day moving average). When we broke that it sold off and now you’re seeing it hovering around that level.”

“Amidst a day the volume isn’t robust, technical levels can play a key role … That added a little fuel to the move lower. Overall from a trading perspective you see a self-fulfilling prophesy. The lower the tape goes, people will rein in exposure. Sometimes selling begets selling. There’s a backdrop of trade concerns.”

“We’re due for some sort of pullback. You’ve multiple sectors getting hurt. It makes me feel you’ve got exposure being taken down.”

“I do think tariff talk is at the front of investors’ minds and is what is influencing the market more than anything else today. It’s really hard to know just how all of this is going to shake out. For sure, we are looking at negative issues for U.S. agriculture products, for steel and other basic materials, especially aluminum, and also how all of the tit-for-tat shakes out with different countries. That’s going to affect different companies differently.

There’s just a lot of uncertainty about whether the plans are going to work out for the better or not.”

“The market is perceiving that politics will become policy. The market is starting to price in that the tariffs will start to become real. The rhetoric is getting stronger rather than weaker. We’ll keep trading off if the trend persists.”

“A trade war means lower global GDP. It’s bad for growth. What we’ve seen in the last nine days was a measured sell off. We’re still barely positive for the year.”

“The rhetoric is foreboding. It’s not sounding better and the deadline is getting closer.”

“There’s going to be a measured retreat. You want to have appropriate window dressing for quarter end. You can’t have a bunch of cash you have to have a positions. That’s part of why its measured.”

“It’s now all about the whole trade dialogue, which seems to be going in the wrong direction. Most market participants and most companies would really like to see a resolution of trade policy so people understand what the polices are.”

“I think everybody recognizes that globalization has been a great thing… This position that we are taking currently, not only with the Chinese, who I think are the primary target of all this trade talk, but even with our friends, is unsettling.”

“The market in general has hung in there really well with the belief that this is a negotiating strategy, that these things aren’t actually going to happen.”

“It’s seeming like it is. It’s beginning to seem like these positions that are extreme and punitive are actually not just a negotiating strategy, it looks like they might be reality. And if they’re reality, then it causes all kinds of disruption to global business endeavors. Pretty much every company in their supply chain…suddenly they have got a cost or an uncertainty.”

“As it seems that this is not just a negotiating tactic, this could be reality, that is beginning to unnerve the market.”