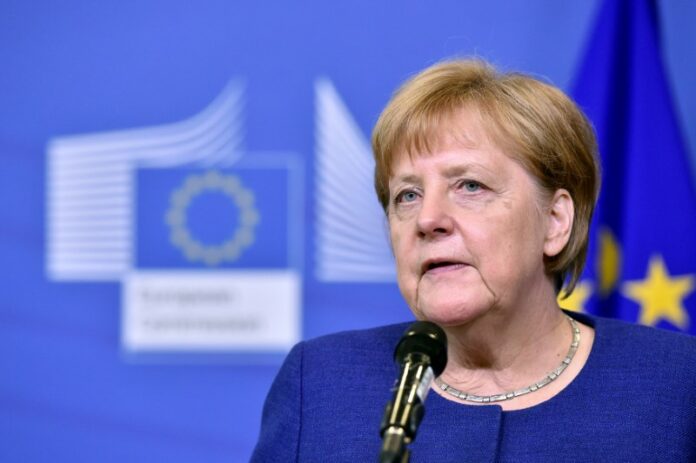 BERLIN (Reuters) – German Chancellor Angela Merkel and her Spanish counterpart agreed on Tuesday to cooperate on migrant policy, saying a European approach was the only way forward as her Bavarian allies pile pressure on her to deliver a deal this week.

Merkel was due to meet her right-wing coalition partners later in the day to try to defuse a row on immigration that threatens to topple her three-month old government, days before a crunch summit of EU leaders who are also divided on the issue.

Chancellor for nearly 13 years, Merkel needs to deliver some sort of a deal at the June 28-29 EU meeting to keep her Bavarian conservative allies, the Christian Social Union (CSU), on board.

If she fails to get at least bilateral deals to ease the burden on Germany, Interior Minister Horst Seehofer, head of the CSU, has said he will defy Merkel and introduce border controls.

That could spell the end of her coalition as Merkel says such controls would be a reversal of her liberal migrant policy and deal a blow to the EU’s Schengen open-border system.

Merkel stressed she did not see an EU-wide deal this week.

“There will be no solution for the whole asylum package,” she told a news conference with Spanish Prime Minister Pedro Sanchez, adding, however, that there was agreement on several points.

She and Sanchez discussed how to support northern African states to stem the number of migrants arriving in Europe.

“It is about give and take, as we did in the EU-Turkey agreement,” said Merkel.

Sanchez said it was “important we have a common answer to a common challenge”.

Merkel’s open-door migrant policy, which has resulted in the arrival of more than 1.6 million migrants in Germany since the start of 2015, is widely blamed for the rise of the far-right Alternative for Germany (AfD).

Leading German industry groups have called for a rapid resolution of the coalition row.

Skilled trades association president Hans Peter Wollseifer told the daily Sueddeutsche Zeitung there would be “incalculable difficult social and economic consequences” if the government were to collapse.

With little sign of a breakthrough in her EU talks, Merkel, head of the Christian Democrats (CDU), was set for tough talks on Tuesday night with the leaders of her two other coalition partners, the CSU and Social Democrats (SPD).

“We are united in our goal, it is just about the procedure. I don’t understand the resistance to my plans and am perplexed by that,” Seehofer was quoted in Focus magazine as saying.

If Seehofer goes ahead with his plan next week to turn migrants back at the border who have already registered in other EU states, it would be a direct affront to Merkel, and many in the CDU think she would have to fire him.

Or else the CSU and CDU could dissolve their parliamentary bloc, a 70-year-old alliance – which would rob Merkel of a majority in the Bundestag lower house.

The CSU, seeking to stem an advance by the AfD in October’s Bavarian state assembly election, is waiting until the end of the summit before deciding what to do.

“On Sunday, the party leaders will consult on how to evaluate the results and how to move forward,” said Bavarian Premier Markus Soeder.

Italy said on Tuesday that Malta would allow the rescue ship Lifeline, stuck for a fifth day in international waters in the Mediterranean with more than 230 migrants aboard, to enter one of its ports, and that they would be divided up among EU members willing to take them in..

A Danish cargo ship carrying more than 100 rescued migrants and not covered by Italy’s ban on charity ships was permitted to dock on Tuesday in Pozzallo on the Italian island of Sicily.