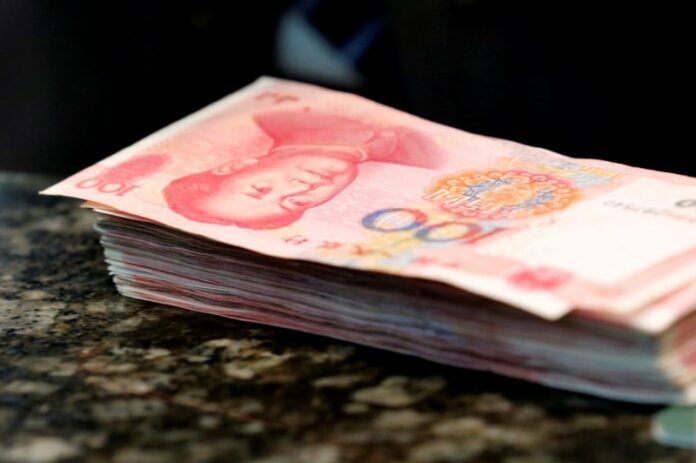 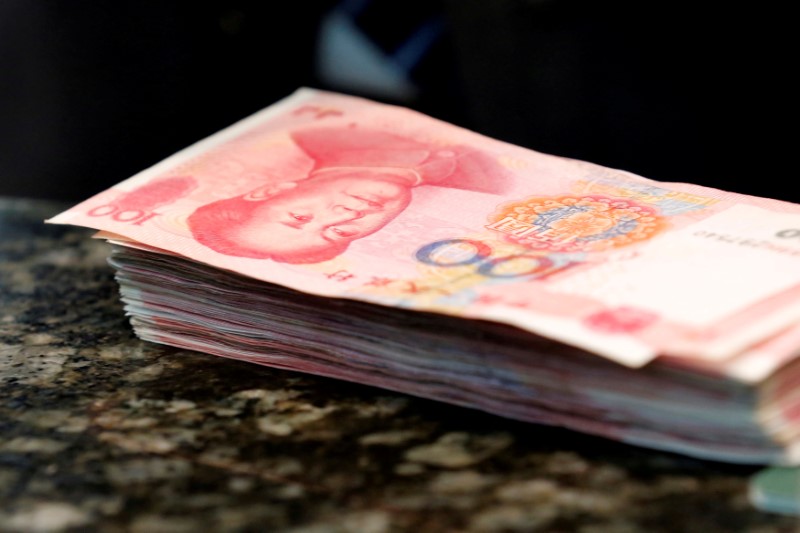 © Reuters. FILE PHOTO: Chinese 100 yuan banknotes are seen on a counter of a branch of a commercial bank in Beijing

SHANGHAI (Reuters) – China’s yuan slipped to a new low on Friday and was on course for its worst month on record, as a bitter Sino-U.S. trade row threatened to rattle the world’s second-biggest economy even as rebound in stocks brought a modicum of calm.

Chinese stocks were also set for their biggest monthly slide since January 2016, highlighting the anxiety among investors as Washington and Beijing showed no signs of backing down from their tariff spat.

U.S. President Donald Trump has shaken the world trade order by seeking to renegotiate the terms of some of the United States’ trading relationships, in particular with China.

The U.S. is targeting $34 billion of Chinese goods for tariffs to take effect on July 6, and has threatened tens of billions of dollars more for similar duties.

Investors worry an extended selloff in stocks and the yuan could spark a bout of capital outflows, putting further strain on the economy and complicating policy making as authorities put up defenses against the trade battle with the United States.

“The central bank is expected to step up efforts to calm investors and slow the pace of the yuan depreciation that has sparked risk aversion across regional markets, including a possible reintroduction of the counter-cyclical factor (CCF),” Gao Qi, FX strategist at Scotiabank in Singapore, wrote in a note on Friday.

He said there would be “strong resistance” at 6.70 yuan per dollar.

A trader at a regional bank in Shanghai who declined to be named said there had been some “filtering” of the midpoint fixing, which is set by the central bank each morning, in an apparent bid to keep the yuan from falling too sharply.

“It is too early to say whether the counter-cyclical factor has been revived. If market sentiment could recover by itself, there is no need to use the factor. Market still needs some time to digest,” the trader said.

In May 2017, the People’s Bank of China added a secret “counter-cyclical factor” to its formula for calculating the midpoint, which helped put a floor under a falling yuan. It effectively removed the x-factor at the start of this year as the yuan rebounded.

The trader said dollar demand was strong this week and could persist until July 6, when U.S. tariffs on Chinese goods are set to take effect.