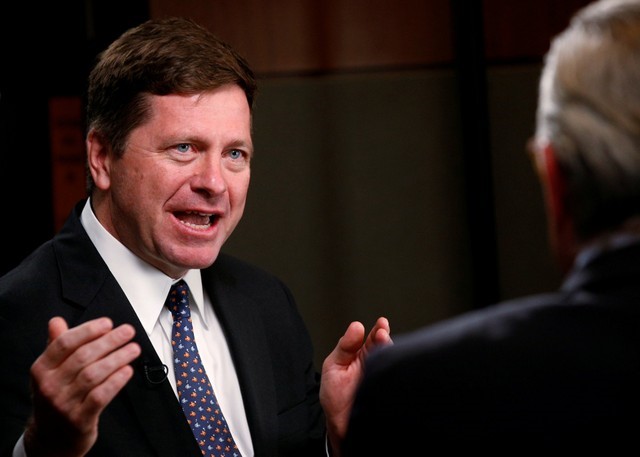 U.S. regulator shelves reform on voting in board fights: sources

© Reuters. FILE PHOTO – Clayton, Chairman of the Securities and Exchange Commission, speaks during an interview in New York

By Liana B. Baker and Michelle Price

NEW YORK/WASHINGTON (Reuters) – The U.S. securities regulator has shelved a proposed Obama-era reform that would have given shareholders in companies more freedom to vote for their preferred candidates during contested board elections, people with direct knowledge of the matter told Reuters.

The proposal made by the Securities and Exchange Commission (SEC) two weeks before President Donald Trump’s election victory would have changed how shareholders vote during activist investor-led fights for board seats, an issue that has divided companies and investors for years.

SEC officials have said publicly in recent months that the proposed rule-change remains a priority, raising hopes among activist investors who have pushed for changes, including Pershing Square (NYSE:) Capital Management’s William Ackman, that the SEC will finalize and implement the rule soon.

However, several people familiar with the matter told Reuters the Commission’s new boss Jay Clayton has in fact shelved the proposal, in what will be a disappointment for many investors who say the current system favors company management in board fights.

Right now, shareholders voting remotely have to choose from a full slate of board directors nominated by the management or a competing set of nominees provided by an activist investor.

Unlike in many countries such as Canada and Australia, U.S. investors cannot mix and match from these competing lists unless they send a representative to vote in person at the annual meeting.

According to the SEC, the vast majority of votes in the United States are cast remotely, so such constraints can influence who ultimately ends up controlling the board and company strategy.

Activist investors say the present system works against them because shareholders are more likely to play it safe and vote for the management list, even if they like some of the activists’ candidates. Companies say changing the rules would spark more disruptive and harmful activist-led fights.

But Trump’s victory subsequently saw the Republican party, which is eager to loosen rules it says are deterring firms from going public, take over the SEC with Republican Commissioner Michael Piwowar becoming acting chair in January 2017 until Clayton’s appointment in May 2017.

The people, who declined to be named because internal SEC discussions are private, said the “universal proxy” proposal was dead for the foreseeable future.

They said it was unlikely Clayton, a political independent who leans toward the right, would support the rule given he has said his priority is to boost company listings.

While Piwowar, who strongly opposed the rule, finished his term this month, Clayton’s vote would likely still be necessary to finalize the changes, one of the people said.

For a rule change to pass, the majority of commissioners must vote for it.

Hester Peirce, the other Republican commissioner, told Reuters she had “not come to any conclusions” on the issue and would need to review all the industry comments before doing so.

The proposal is still on the agency’s official long-term agenda, but has fallen off a list of its 12-month priorities drawn-up in March.

While some senior SEC officials would like to reprise the rule, this is unlikely to happen under the current administration, the people said.

Tim Goodman, director at Hermes , the stewardship arm of Hermes Investment Management which advises clients with $464 billion of assets, says the current U.S. system causes “practical difficulties for shareholders, including ourselves, who have to take account of the time and cost of attending the meeting in person.”

Goodman said that Hermes, which votes on behalf on clients who invests in more than 10,000 companies globally, would vote for different directors in some U.S. board fights if the rules were changed.

Kai Liekefett, head of the shareholder activism practice at law firm Sidley Austin LLP, said in several recent proxy fights, including the high profile contests at Automatic Data Processing (O:) in 2017 and DuPont (NYSE:) in 2015, several large institutional investors were interested in voting for both activist and management candidates, but were not able to do so under the current system.

While investors say they are losing out, business groups, most notably the U.S. Chamber of Commerce, have lobbied to preserve the status quo. The influential group has argued the new rule would increase fights, balkanize boards, and discourage listings, according to a public letter.

A Harvard Law School study of contests between 2001 and 2016 found that a mix-and-match ballot did not favor special interests or spark more fights. In some cases, it could even favor the management.

For example, New Jersey-based Destination Maternity (O:), which had its entire board ousted after losing a shareholder vote in May, would have seen some management nominees keep their seats had investors been able to choose from both slates of candidates, according to people familiar with the vote.

In fact, even without an SEC mandate, some companies adopt a universal proxy when they fear activist campaigns to replace their entire board are getting traction, because that way they can try to have some of their nominees voted through.

Investors said they are not giving up.

Chris Phillips, director of institutional relations at the Washington State Investment Board, said he met Peirce in March to try to persuade her to back the rule change.

“Requiring physical attendance at many shareholder meetings in order to exercise such votes is impractical and antiquated,” Phillips told Reuters in an email.