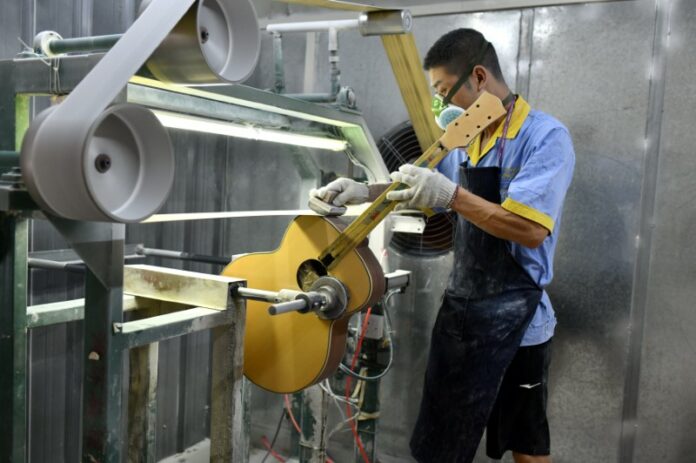 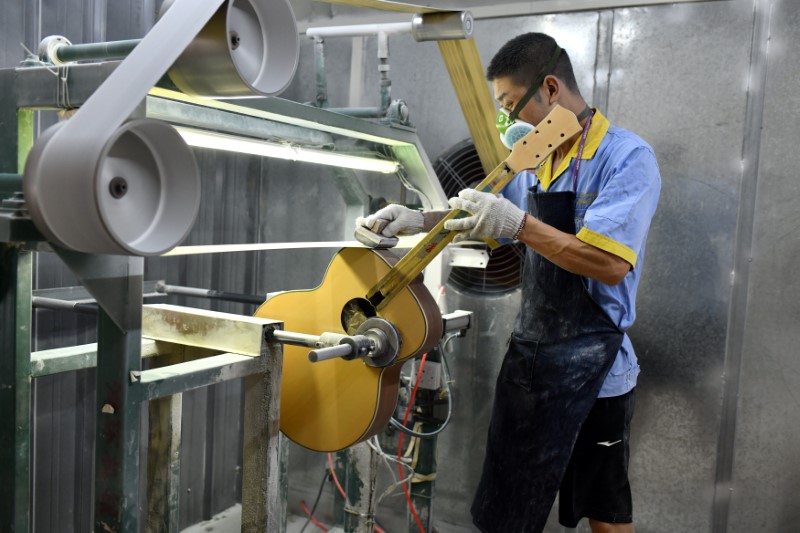 © Reuters. Man works on a guitar at a factory inside a guitar industrial park in Zunyi

BEIJING (Reuters) – Analysts have raised their 2018 growth forecasts for China’s economy, a surprising result given an escalating trade war with the United States, as they see a deleveraging drive and pollution crackdown having less of an impact than initially expected.

A Reuters poll of 76 economists now predict gross domestic product (GDP) growth in the world’s second-biggest economy at 6.6 percent this year, compared with an April pick for 6.5 percent expansion, with the latest forecasts ranging from 6.3 percent to 6.9 percent.

That would be a slowdown from 6.9 percent last year but easily within the government’s target of around 6.5 percent.

Since the last poll, China reported better-than-expected first quarter growth of 6.8 percent, as the property market held up despite restrictions on home purchases in many cities and consumer demand was strong.

Economists expect broad momentum to ease, albeit at a gradual pace, over the rest of the year, with second quarter growth forecast at 6.7 percent, third quarter at 6.6 percent and 6.5 percent in the fourth quarter.

China will publish its second-quarter GDP and June activity data on Monday at 0200 GMT.

While the brighter full-year outlook came despite an escalating trade war with the United States, most forecasts were collected before the United States raised the stakes on Tuesday by announcing plans for 10 percent tariffs on an extra $200 billion worth of Chinese imports.

The escalating trade tussle has raised uncertainty about the outlook, which has roiled Chinese financial markets in recent weeks.

China’s economy has started to show signs of fatigue as credit expansion slows and domestic demand ranging from government-funded infrastructure investment to consumer spending looks to be softening.

And the nation’s massive export sector may start to feel a larger impact from tariffs, as Washington imposed 25 percent tariffs on $34 billion of Chinese imports on Friday, drawing rapid retaliatory duties by Beijing on the same amount of U.S. exports to China.

Amid the backdrop of the trade uncertainty, and in an effort to cushion the hit to the economy from a multi-year crackdown on riskier lending that has driven up corporate borrowing costs, the central bank has freed up more cash for lending by cutting reserve requirements for lenders three times this year.

UK-based Fathom Consulting said its China activity indicator dipped to a 15-month low of 6.2 percent in May, with the trend reminiscent of a slowdown in growth from late 2013-2015.

“Back then, just as they are now, the Chinese authorities used monetary stimulus to support short-term growth, repeatedly cutting banks’ reserve ratio requirements while denying that the economy was materially slowing,” Fathom senior economist Joanna Davies wrote in a note Wednesday.

Analysts expect the People’s Bank of China (PBOC) to cut the reserve requirement ratio (RRR) by another 100 basis points to 14.50 percent in the fourth quarter from the current 15.50 percent, the poll showed.

Most economists expect China to keep its benchmark lending rate unchanged at 4.35 percent through at least the end of 2019, as the central bank focuses on other monetary policy levers. The PBOC last moved its benchmark policy in October, 2015, by easing rates.

Growth next year will likely cool further to 6.3 percent, according to the survey, unchanged from the April poll.

Economists also predicted annual consumer inflation to be 2.1 percent this year, down from a forecast of 2.3 percent in April, but within government expectations. Inflation in 2019 is likely to tick up to 2.2 percent, the poll showed.