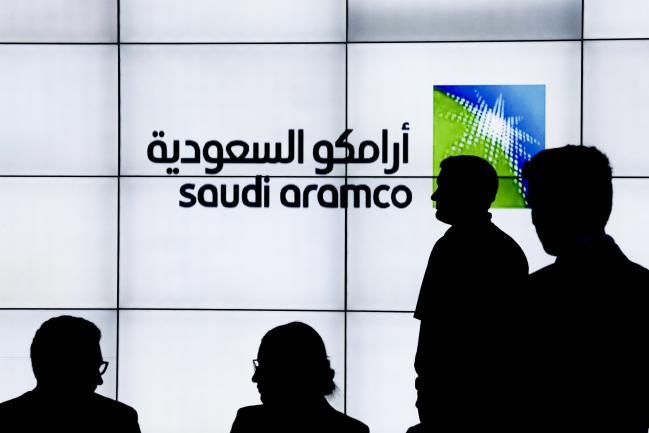 © Bloomberg. A Saudi Arabian Oil Co. (Aramco) logo sits on an electronic display at the company’s corporate pavilion during the 22nd World Petroleum Congress in Istanbul, Turkey, on Wednesday, July 12, 2017. Oil�fell from the lowest closing price in two weeks as talk of Libya and Nigeria being requested to cap their production failed to dispel doubts about the effectiveness of OPEC�s cut.

(Bloomberg) — A potential deal between Saudi Arabia’s state-owned oil and petrochemical giants could enable the country’s sovereign wealth fund to raise billions of dollars it had hoped to collect from Aramco’s stalled initial public offering.

Saudi Aramco, the world’s largest oil company, is considering buying a strategic stake in the Sabic petrochemical group, Aramco said on Thursday in a statement, adding that the talks were at a “very early stage.” The Public Investment Fund, the country’s sovereign wealth fund, controls 70 percent of Sabic, as Saudi Basic Industries Corp. is known, with the rest of the company’s shares listed on the Saudi stock exchange.

If Aramco does buy a stake, the deal would let the PIF convert at least part of its shareholding into cash that it could then use to make other investments overseas. At current market prices, the PIF’s stake in Sabic is worth about $70 billion. For the government, the transaction would simply involve moving money from one pocket to another, as Aramco, Sabic and the PIF are all state-run entities.

The PIF, which controls about $150 billion in Saudi-listed companies, had planned to raise at least $100 billion through the Aramco IPO in the second-half of 2018. That listing has now been delayed until 2019 at the earliest and may be postponed indefinitely.

The purchase of a big stake in Sabic could boost Aramco’s valuation, but only to a point. Sabic’s current market capitalization is slightly more than $100 billion — just a fraction of the $2 trillion valuation that Saudi Crown Prince Mohammed bin Salman is seeking for the oil behemoth. Aramco may also have to take on debt to pay for a large stake, reducing its appeal to investors.

Aramco, known formally as Saudi Arabian Oil Co., said it didn’t plan “to acquire any publicly held share” of the petrochemical company. The PIF confirmed the talks in a separate statement.

The biggest beneficiary of such a deal would be the PIF, which could raise money for its investments, according to two people familiar with the matter, who asked not to be identified because the discussions aren’t public. By comparison, Aramco, if it bought only part of Sabic, wouldn’t be able to reap all the synergy benefits to be gained from a full acquisition.

Under the leadership of Yasir Othman Al-Rumayyan, the sovereign wealth fund is shifting its investment focus from domestic — with stakes in the likes of Sabic and National Commercial Bank — to international, funneling billions of dollars into high-profile overseas deals. The fund lies at the heart of Saudi Arabia’s effort to reduce its reliance on oil revenue under an economic transformation plan known as Vision 2030. In addition to running the PIF, Othman Al-Rumayyan is also a director at Aramco.

So far, the PIF has struck an agreement to invest $45 billion in SoftBank Group Corp.’s technology fund, committed $20 billion to an infrastructure fund with Blackstone Group LP and said it plans to invest about $1 billion in Virgin Group’s space companies.

It’s unclear how Aramco would fund the acquisition of a stake in Sabic. The oil company has invited banks to pitch for advisory roles for a potential deal, according to a person familiar with the matter.

Aramco is investing heavily to become a major producer of chemicals, to enhance its appeal to potential investors if the IPO is revived and also to reduce its dependence on pumping raw crude. The company is already working with Sabic, one of the world’s largest petrochemical makers, to turn crude directly into chemicals that are the building blocks for plastics and other commonly used consumer materials. Aramco also owns a large stake in the $20 billion Sadara petrochemicals joint-venture with DowDuPont Inc.

“Our goal is to be a top-tier energy and chemical company by 2030,” Abdulaziz Al-Judaimi, Aramco’s senior vice president of downstream, said in an interview last year. “We will expand organically, but we also see inorganic opportunities,” he said, signaling an appetite for making deals that’s rare for a company with little experience in mergers and acquisitions. “Chemicals is a global business.”