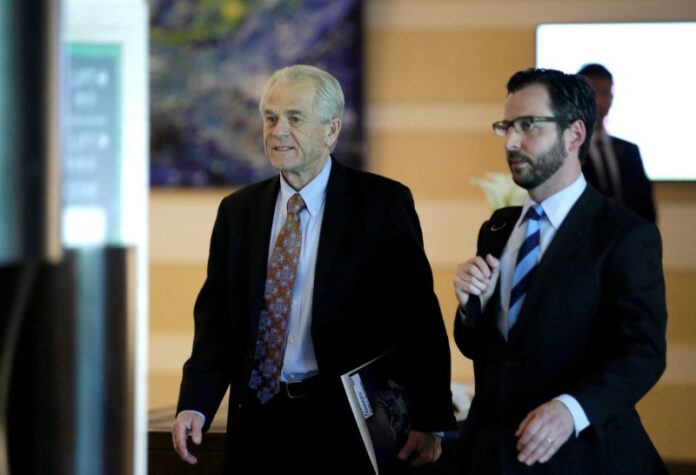 © Reuters. White House trade and manufacturing adviser Peter Navarro, a member of the U.S. trade delegation to China, leaves a hotel in Beijing

WASHINGTON (Reuters) – White House trade adviser Peter Navarro told CNBC on Thursday that U.S. President Donald Trump’s trade strategy with China, which includes levying new tariffs that have sparked a trade clash, is not as disruptive as many describe.

“We got two economies that add up to around $30 trillion in annual GDP. The amount of trade we’re affecting with the tariffs is a rounding error compared to that,” he said during an interview at the White House.

“My point is that it’s much less disruptive than these headlines would suggest, and it’s much more constructive as we see the adjustments made in terms of where investment is going to go and where we’re going to build.”

White House officials are giving CNBC a series of interviews as part of the administration’s rollout of a new workforce initiative.

Kevin Hassett, chairman of the Council of Economic Advisers, told CNBC the new tariffs only affect a small portion of imports and that so far they have not had a widespread negative effect on the economy.

“Anecdotally there are some disruptions and I understand that. And there’s some retaliation going on,” he said, adding that despite price increases in steel he had not seen layoffs in steel-consuming industries. “The things that we’ve been looking for that are the key indicators are not showing signs of anything serious yet.”

Hassett said 4 percent of imports are affected by the tariffs.