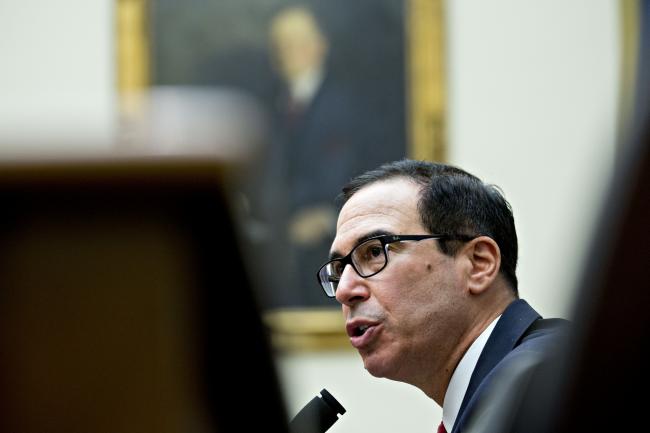 (Bloomberg) — Top U.S. Treasury Department officials have gone from economic diplomats to trade warriors, a shift that leaves Secretary once again exposed to broadsides from global counterparts at a multilateral summit this weekend.

With the U.S. on the cusp of trade wars on multiple fronts — and no signs of de-escalation — the Group of 20 finance ministers will try to find common ground where they can, and likely debate tariffs and other trade barriers when they gather in Buenos Aires July 21-22.

This marks Mnuchin’s second trip to the Argentine capital for meetings of G-20 ministers. During his first visit in March, the secretary faced harsh criticism from his counterparts, and was publicly rebuked three months later by peers at a Group of Seven finance ministers summit in Canada. Since then, America’s trade disputes with the world have only escalated.

If those recent trips to global summits are any indication, talks this weekend will likely result in Mnuchin facing a barrage of criticism from world peers, in tense discussions that will ultimately do little to sway U.S. policy. The meetings will make plain America’s retreat from allies and global forums that some critics warn is reducing U.S. influence over world affairs.

“The U.S. is fast losing its ability to drive the global economic agenda and provide leadership in tackling problems and issues that have a global rather than just national scale,” said Eswar Prasad, a professor at Cornell University who previously worked at the International Monetary Fund’s China division.

After imposing steel and aluminum tariffs on most G-20 countries, the U.S. is now considering new duties on imports of automobiles and uranium. Trump has also slapped 25 percent tariffs on $34 billion of Chinese goods, and said in a CNBC interview that aired Friday he’s “ready to go” with $500 billion in tariffs on imports from the Asian nation.

The duties are designed to pressure trade partners to lower barriers to American goods, though so far they have resulted in retaliatory tariffs on U.S. products. White House officials say the long-term benefits of a more open playing field for American firms will make the short-term pain of tariffs worthwhile.

Yet the IMF warned this week the escalating conflict poses the biggest risk to the global economic recovery, after long arguing that countries should avoid protectionism and turn to multilateral bodies like the World Trade Organization to resolve conflicts. Rather than pay heed to its warnings, Treasury officials have turned up the heat on the IMF and other global forums for critiquing U.S. policy.

“We are working every day to guide multilateral financial organizations toward a limited role that is more consistent with free markets, faster growth and U.S. national interests,” Mnuchin told Congress in a July 12 hearing.

The Treasury Department is also increasingly focused on economic sanctions rather than international affairs and diplomacy. Mnuchin has said repeatedly that he spends more than half his time working on sanctions, which the Trump administration has at times imposed unilaterally. European allies — now called economic foes by Trump — chafed against the U.S.’s decision to withdraw from the Iran nuclear deal.

The department’s move toward a more combative posture is perhaps most evident in the words of Under Secretary for International Affairs David Malpass, who has eschewed the more diplomatic role that his predecessors played by attacking multilateral forums. He said this week that Europe’s role in international organizations “conflicts with the goal of greater prosperity,” and has touted the use of sanctions as “very useful” with the potential to “move the world toward peace.”

G-20 policy makers will have plenty of opportunities to confront Treasury officials this week. Mnuchin, who travels to Brazil before heading to Argentina, is scheduled to hold about a dozen bilateral meetings and informal talks on top of the official G-20 proceedings.

There is one notable exception: Mnuchin has no plans to meet individually with Chinese officials, which is a missed opportunity to ease trade disputes between the world’s two biggest economies. The conflict intensified Thursday when President Donald Trump complained about the Chinese currency, which slumped to a one-year low as the central bank showed little sign of intervening.

China’s markets ended Friday on a stronger footing though, with the yuan reversing an early decline. The yuan has depreciated more than 4 percent over the past month, the steepest among major currencies. A weaker yuan makes Chinese exports more attractive and imports more expensive, which could inflate its trade surplus with the U.S.

The Treasury’s press office didn’t respond to requests for comment on the depreciation.

If past international forums are a guide, Mnuchin will probably deny the U.S. is losing influence and instead seek to emphasize areas where most countries can find common ground, such as cybersecurity and countering terrorist financing.

But Japan expects G-20 participants to discuss trade frictions, especially given the threat that the dispute will hit other economies, according to its finance minister, Taro Aso. Japan has also threatened to act if Trump slaps duties on car imports, after refraining from retaliation against his tariffs on their steel and aluminum exports.

“The case of autos is different,” Japanese Trade Minister Hiroshige Seko said this week. “Our response would change.”