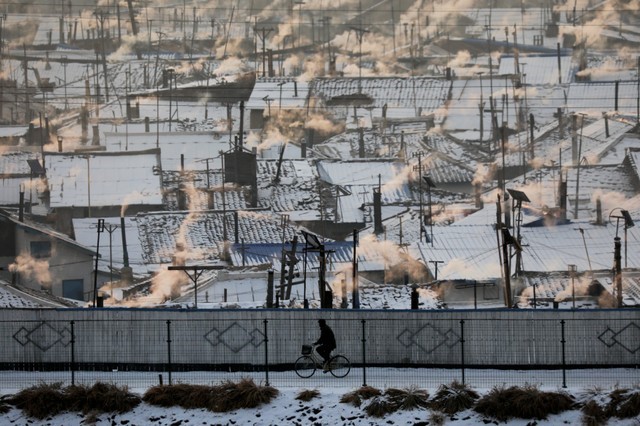 © Reuters. FILE PHOTO: A North Korean man is photographed from the Chinese side of the border near the town of Changbai, China

Gross domestic product (GDP) in North Korea last year contracted 3.5 percent from the previous year, marking the biggest contraction since a 6.5 percent drop in 1997 when the isolated nation was hit by a devastating famine, the Bank of Korea said.

Industrial production, which accounts for about a third of the nation’s total output, dropped by 8.5 percent and also marked the steepest decline since 1997 as factory production collapsed on restrictions of flows of oil and other energy resources into the country. Output from agriculture, construction industries also fell by 1.3 percent and 4.4 percent, respectively.

“The sanctions were stronger in 2017 than they were in 2016,” Shin Seung-cheol, head of the BOK’s National Accounts Coordination Team said.

The steep economic downturn comes as analysts highlight the need for the isolated country to shift toward economic development.

“As long as exports of minerals are part of the sanctions, by far the most profitable item of its exports, Pyongyang will have no choice but to continue with its current negotiations with the U.S. (to remove the sanctions),” said Kim Byeong-yeon, an economics professor at the Seoul National University with expertise in the North Korean economy.

North Korea’s coal-intensive industries and manufacturing sectors have suffered as the UN Security Council ratcheted up the sanctions in response to years of nuclear tests by Pyongyang.

“This year will be a lot worse. Shrinking trade first hits the Kim regime and top officials, and then later affects unofficial markets,” said Kim at Seoul National University, adding that a reduction in tradable goods would eventually decrease household income and private consumption.

North Korea’s black market, or Jangmadang, has grown to account for about 60 percent of the economy, and is where individuals and wholesalers buy and sell Chinese-made consumer goods or agricultural products, according to the Institute for Korean Integration of Society.

China’s total trade with North Korea dropped 59.2 percent in the first half of 2018 from a year earlier, China’s customs data showed last week.

The BOK uses figures compiled by the government and spy agencies to make its economic estimates. The bank’s survey includes monitoring of the size of rice paddy crops in border areas, traffic surveillance, and interviews with defectors. North Korea does not publish economic data.

Overall exports from North Korea dropped 37.2 percent in 2017, marking the biggest fall since a 38.5 percent decline in 1998, the BOK said on Friday, citing data from the Korea Trade-Investment Promotion Agency.