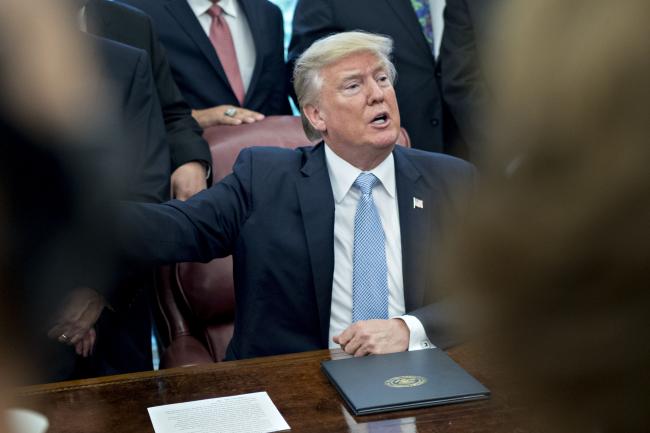 © Bloomberg. U.S. President Donald Trump speaks to members of the media after signing a proclamation declaring a day of prayer in the Oval Office of the White House in Washington, D.C., U.S., on Friday, Sept. 1, 2017. Trump declared Sunday, September 3 a national day of prayer for Hurricane Harvey victims.

(Bloomberg) — President Donald Trump again accused China of devaluing its currency and reiterated his criticism that the Federal Reserve is raising rates. Stocks and the dollar fell.

“China, the European Union and others have been manipulating their currencies and interest rates lower, while the U.S. is raising rates while the dollars gets stronger and stronger with each passing day — taking away our big competitive edge,” Trump tweeted early Friday. “The United States should not be penalized because we are doing so well. Tightening now hurts all that we have done. The U.S. should be allowed to recapture what was lost due to illegal currency manipulation and BAD Trade Deals. Debt coming due & we are raising rates — Really?”

His comments that China and the EU are manipulating currencies contradict a Treasury Department semi-annual report released in April that refrained from naming any country a currency manipulator based on specific criteria.

The Bloomberg fell to its weakest levels of the day after Trump’s remarks. Futures on the declined.

Trump on Thursday criticized the Fed’s series of interest-rate increases, breaking with more than two decades of White House tradition of avoiding comments on monetary policy out of respect for the independence of the U.S. central bank.

The Fed has raised interest rates five times since Trump took office in January 2017, with two of those coming this year under Chairman Jerome Powell, the president’s pick to replace Janet Yellen. In the interview, Trump called Powell a “very good man.”