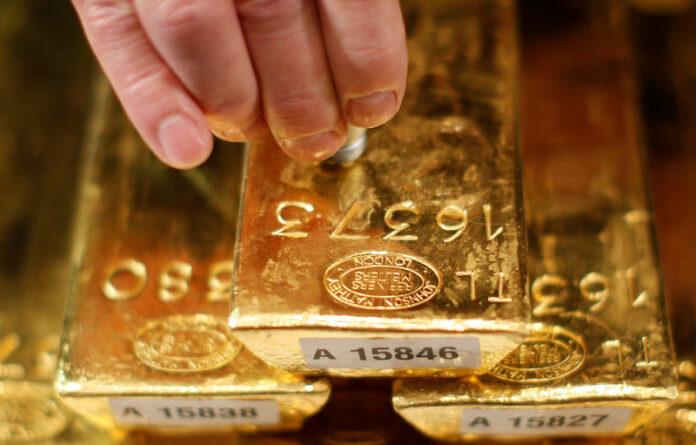 Investing.com – Metals traders will remain focused on the dollar this week after comments by U.S. President Donald Trump on interest rates stalled a rally in the greenback on Friday, offering some relief to gold, which recovered from one-year lows.

Investors will also be looking ahead to Friday’s U.S. GDP report to see how the economy performed in the second quarter. The data is expected to show that growth rebounded in the three months to June, boosted by an increase in consumer spending.

Investors will also be monitoring developments in the intensifying global trade conflict.

Gold prices rose on Friday, paring back some of their weekly loss after late Thursday, claiming that their plans to raise U.S. interest rates risked undermining his efforts at strengthening the economy.

Trump on Friday, taking to Twitter to claim that tighter monetary policy was penalizing the U.S. by contributing to a stronger dollar.

He also accused China and the European Union of currency and interest-rate manipulation that he claims has put the U.S. at a disadvantage.

In addition, Trump indicated that he is prepared to ., worth around $500 billion per year, escalating a trade conflict between Washington and Beijing.

Gold prices have failed to garner much support despite growing risk aversion over trade tensions, suggesting the yellow metal is losing its safe haven status.

The dollar fell across the board on Friday, snapping a rally that had seen it hit one-year highs in the previous session.

The , which measures the greenback’s strength against a basket of six major currencies, was down 0.77% at 94.25 in late trade.

It was the largest one-day percentage decline in three weeks, and was enough to turn the dollar index lower for the week and for the month. For the week, the index was down 0.29% and it is down 0.11% for the month to date.

The U.S. is to release data on existing home sales.

Australia is to produce data on consumer price inflation.

The U.S. is to release data on new home sales.

The ECB is to announce its latest monetary policy decision. The announcement is to be followed by a press conference with President Mario Draghi.

The U.S. is to release reports on durable goods orders and initial jobless claims.

The U.S. is to round up the week with preliminary data on second quarter growth and a revised look at consumer sentiment.