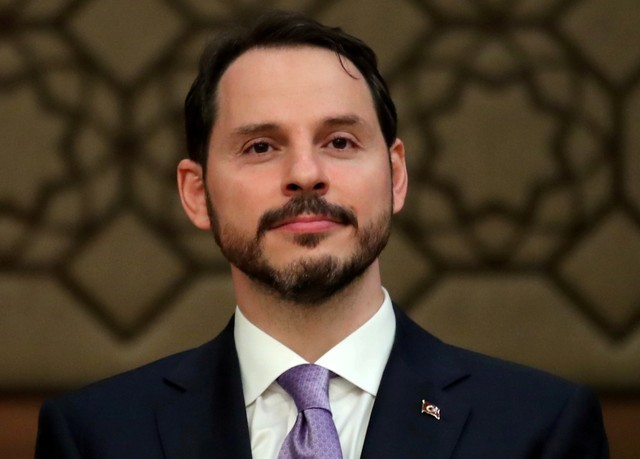 ANKARA (Reuters) – Turkey is continuing its strong economic growth trend and the foundations of its economy are strong, new Finance Minister Berat Albayrak was quoted as saying by state media on Sunday.

Concerns about the central bank’s independence intensified after President Tayyip Erdogan appointed his son-in-law Albayrak as treasury and finance minister, boosting expectations that the president – a self-described “enemy of interest rates” – will look to exercise greater influence over monetary policy.

The Turkish lira has been hammered this year, losing a fifth of its value against the U.S. dollar, on concerns about the central bank’s ability to rein in double-digit inflation, while Erdogan has repeatedly called for lower interest rates.

Albayrak, who is in Argentina for a G20 meeting, was quoted by state-run news agency Anadolu as saying the government’s recent policies were aimed at maintaining prudent fiscal policies, seeing healthy credit growth, carrying out structural reforms and strengthening Turkey’s monetary policy framework.

“Turkey’s economy continues its strong growth momentum. Our economic foundations are going to be strong and our outlook is promising,” Albayrak said.

With Erdogan having merged the Treasury and the Finance Ministry, Albayrak’s appointment effectively saw him replace both Mehmet Simsek and Naci Agbal in a cabinet that now has no obvious investor-friendly ministers.

Albayrak’s comments, therefore, are closely watched by investors for clues on whether he will seek to calm financial markets by adopting a more orthodox approach to monetary policy or reiterate Erdogan’s views that high interest rates stoke inflation.

Following his appointment, Albayrak said the central bank is independent and will do whatever economic realities and market conditions necessitate.

The central bank’s monetary policy committee, which has raised rates by 500 basis points since April in an effort to put a floor under the currency, will meet on July 24.

On the sidelines of the G20 summit in Buenos Aires, Albayrak said on Twitter that he had met with his U.S., Chinese, German, Brazilian, South Korean, French and Indonesian counterparts.