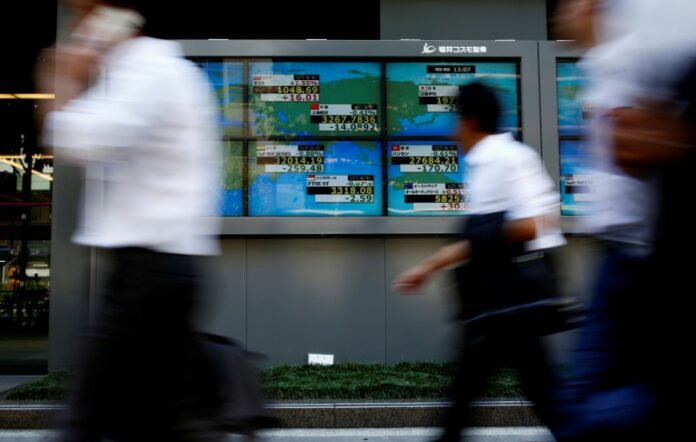 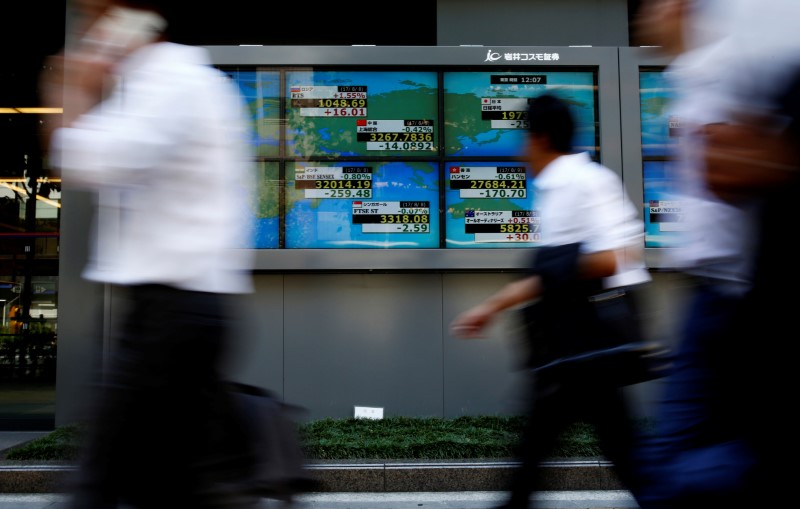 © Reuters. People walk past an electronic board showing Japan’s Nikkei average outside a brokerage at a business district in Tokyo

Trump, on Friday, lamented the recent strength of the U.S. dollar and accused the European Union and China of manipulating their currencies.

The () is so far up 2.4 percent this year led largely by Fed rate rises, strong macro-economic data and nervousness about a full-blown tariff war. It was last down 0.2 percent at 94.27, the lowest in more than two weeks.

Trump’s remarks on Friday, coupled with new threats to slap duties on all U.S. imports from China, triggered sell-offs in Wall Street and European stocks on Friday, despite good corporate earnings. [nL1N1UG076]

Chinese shares also opened lower but quickly reversed their losses, with both the blue-chip index () and Shanghai’s SSE (LON:) Composite () up a touch.

“Although U.S. equities edged lower on Friday and the yen strengthened, most cross-asset moves are supportive of APAC equities – particularly dollar weakness, strength in emerging markets FX, and a dramatic bear steepening of global yield curves. Commodities are also mostly trading higher,” analysts at JPMorgan (NYSE:) said in a note to clients.

Also playing a role in the global tick-up in yields was a Reuters report that the Bank of Japan was in unusually active discussions to modify its massive easing program. [nL4N1UG3OJ]

The BOJ, in turn, offered to buy an unlimited amount of five- to- 10-year Japanese government bonds on Monday. [nL4N1PS23K]

Benchmark 10-year JGB futures 2JGBv1>, which had started lower on Monday, pared some of their losses on the announcement.

“Trade tensions remain a risk, but with an extended period until implementation (of the tariffs) and the next round of escalation, APAC equities are unlikely to respond much to Trump repeating threats already known,” JPMorgan added.

Investors are now looking ahead to an important meeting between Trump and European Commission President Jean-Claude Juncker.

“Trade tensions are likely to remain in the headlines as Juncker meets President Trump in Washington to discuss potential U.S. tariffs on European autos,” asset manager Insight Investment, which is owned by BNY Mellon, said in a note.

“It’s probably a little too early for the indirect impact of the U.S.-China trade issue to be showing up in the data. Nonetheless, the trade numbers that were released for Singapore and Japan were worse than expected.”

In Singapore, for example, exports rose 1.1 percent in the year to June compared with expectations of a 7.6 percent increase, while electronic exports slipped 7.9 percent. [nL4N1U900W]

In commodities, oil prices were held back by concerns over U.S.-China trade tensions and increased supply. [O/R]