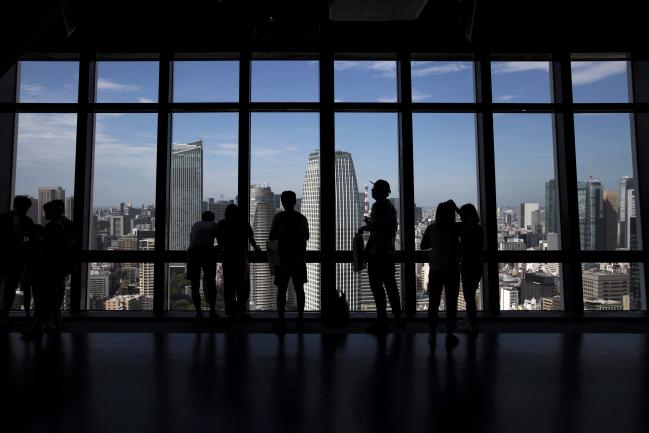 © Bloomberg. Visitors are silhouetted as they look out of windows at an observatory in the central business district of Tokyo, Japan, on Wednesday, June 27, 2018. The Bank of Japan’s (BOJ) Tankan quarterly business survey for June, scheduled to be released on July 2, is likely to show concerns about U.S. tariffs putting a dent in business sentiment. Photographer: Tomohiro Ohsumi/Bloomberg

(Bloomberg) — The Bank of Japan announced its first unlimited fixed-rate bond purchase operation since February after yields jumped on reports it will discuss possible changes to its ultra-loose monetary policy next week.

The BOJ offered to buy 10-year securities at a fixed rate of 0.11 percent after the yield had gained as much as six basis points to 0.09 percent, the highest since February. The benchmark pared its advance after the operation was announced to 0.065 percent.

Any change to Bank of Japan’s stimulus would be the first since 2016 when it introduced control of the yield curve in a bid to lower borrowing costs. The policy has crimped profits at banks and depressed the bond market, with recent media reports suggesting that officials are looking for anything from ways to mitigate the side effects to allowing a natural rise in interest rates.

“If the BOJ were really to steer toward a complete change in policy, it would undoubtedly call for bond selling, but I don’t feel like it’s the case now,’’ said Tadashi Matsukawa, head of fixed-income investment at PineBridge Investments Japan Ltd. The initial gain in yields “looks excessive,’’ he said.

The BOJ has a yield target of about zero percent for the 10-year bond, and conducts fixed-rate operations whenever yields surged to levels deemed as excessive.

Speculation of a policy change spurred a similar move in markets in January. While Governor Haruhiko Kuroda and his board said later that they would consider discussing exiting the stimulus policy from fiscal 2019, they have also said persistently that there would no change until an inflation target of 2 percent has been reached.

“I know absolutely nothing about the basis for those reports,” Kuroda said when asked about the media reports while he was in Buenos Aires to attend a meeting of finance ministers and central bank governors.

Bloomberg’s reporting indicates that officials are focused on coming up with adjustments to mitigate harm without doing anything resembling a move to policy normalization.