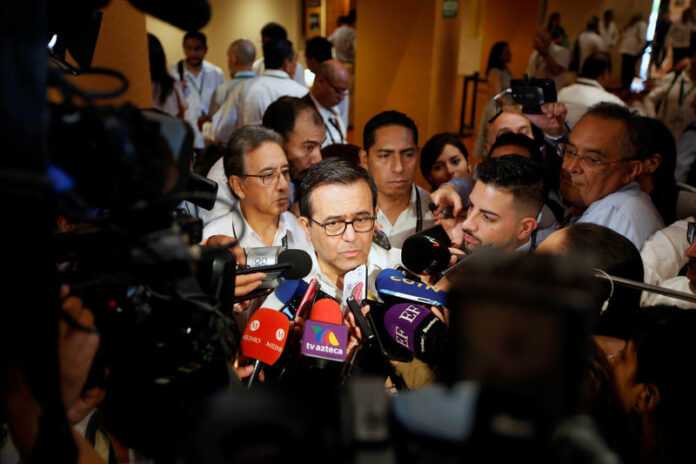 © Reuters. Mexico’s Economy Minister Ildefonso Guajardo gestures to the media during the 5th Business Meeting of the Pacific Alliance in Puerto Vallarta

By Anthony Esposito and Adriana Barrera

PUERTO VALLARTA, Mexico (Reuters) – There is scope to revive efforts to rework the North American Free Trade Agreement (NAFTA) when trade ministers from Mexico and the United States meet this week, a top Mexican official said on Monday.

“There’s clearly a window of opportunity to be able to bed down a series of open issues which are not numerous, but which are very complex,” Economy Minister Ildefonso Guajardo said on the sidelines of a summit of the Pacific Alliance trade bloc in the western coastal city of Puerto Vallarta.

Guajardo is due to hold talks with U.S. Trade Representative Robert Lighthizer at the end of the week in Washington, and will be accompanied by Jesus Seade, the designated chief NAFTA negotiator of the incoming Mexican administration.

Talks to reshape the 1994 trade accord have been underway since last August. But they stalled in the run-up to the July 1 presidential election in Mexico, which produced a landslide victory for veteran leftist Andres Manuel Lopez Obrador.

The United States, Mexico and Canada have been at odds over U.S. demands to impose tougher content rules for the auto industry, as well as several other proposals, including one that would kill NAFTA after five years if it is not renegotiated.

After the election, top officials from both the outgoing and new Mexican governments met in Mexico City with senior Trump administration officials led by Secretary of State Mike Pompeo.

Seade said the visit had sent out “excellent” signals.

“We hope these signals translate into a willingness to move forward,” Seade told reporters in Puerto Vallarta.

Guajardo last week expressed hope an agreement in principle on NAFTA could be reached by the end of August. But reaching that deal was not the main factor of uncertainty hanging over Mexico, he said on Monday.

“The biggest risk is that instead of moving forward with an agenda of opening and integration, we move backwards, closing our economy and really undoing what we’ve built in the last two and a half decades,” Guajardo told reporters.

The talks have been clouded by tit-for-tat measures over trade after the Trump administration slapped tariffs on U.S. steel and aluminum imports.

The United States is also exploring the possibility of imposing tariffs on auto imports, though Guajardo said it was too early to speculate on how that would play out.