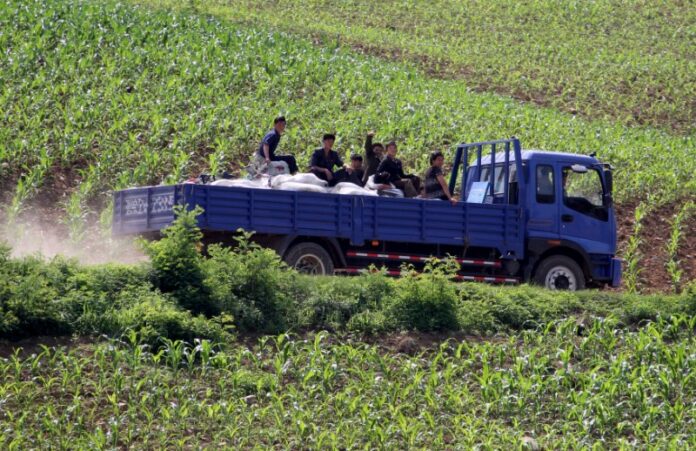 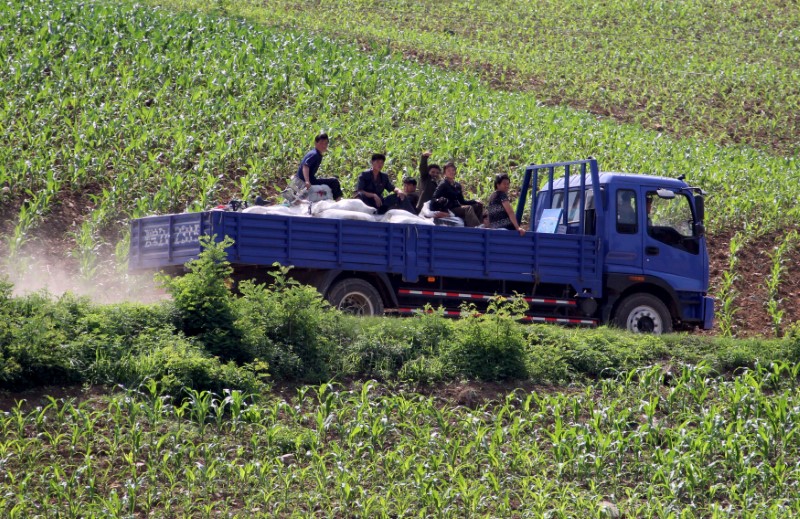 © Reuters. FILE PHOTO: North Koreans take a truck through a path amongst the fields, along the Yalu River, in Sakchu county

SEOUL (Reuters) – Gasoline prices in North Korea have nearly halved since late March, market data analyzed by Reuters shows, adding weight to suspicions that fuel is finding its way into the isolated economy from China and elsewhere despite U.N. sanctions.

The U.N. Security Council passed a resolution in December to ban nearly 90 percent of refined petroleum exports to North Korea over its nuclear and missile programs.

But as North Korean leader Kim Jong Un has moved to improve relations with the United States, China and South Korea, concerns have grown that the policy of “maximum pressure” through sanctions and isolation, is losing steam.

Gasoline was sold by private dealers in the capital Pyongyang at about $1.24 per kg as of Tuesday, down 33 percent from $1.86 per kg on June 5 and 44 percent from this year’s peak of $2.22 per kg on March 27, according to Reuters analysis of data compiled by the Daily NK website. Diesel prices are at $0.85 per kg, down about 17 percent from March.

The website is run by North Korean defectors who collect prices via phone calls with traders in the North.

“My assessment is that there was a greater inflow (of fuel supplies) from abroad, especially China since Kim’s trips there,” said Kang Mi-jin, who works at Daily NK and speaks regularly to sources inside North Korea.

Kim first visited China to meet President Xi Jinping in March, and they held two more summits, in May and June.

“Illegal ship-to-ship transfers are the most prominent means by which this is happening. Every UN member state must step up enforcement,” he wrote on Twitter, without naming any country.

North Korea gets most of its fuel from China, its biggest trading partner, and some from Russia. Washington and Seoul officials have said the North imports some 4.5 million barrels of refined petroleum products and two million barrels of each year.

China had only exported 7,432 tonnes of refined oil products to North Korea in the first six months of this year, out of a total of 60,000 tonnes a year stipulated by the U.N. sanctions.

China had reported its exports to the Security Council’s sanctions committee in a timely manner, Geng added.

“The relevant situation is totally open and transparent,” he said, without elaborating.

Overall, China’s trade with North Korea in the first half of this year tumbled 56 percent on the back of the tightening sanctions, customs data showed on Monday.

North Korean rice prices have also been stable since a spike last September, when the U.N. Security Council imposed new sanctions. Rice has hovered around $0.62 per kg throughout this year.

While other defectors reported some suffering in remote rural regions, Kang said fuel demand has been steady in North Korea, and overall living conditions have improved in line with a booming unofficial market economy.

The unofficial markets, known as jangmadang, have grown to account for about 60 percent of the economy, according to the Institute for Korean Integration of Society.

“I’ve seen signs the economy was slowly improving over the past five years, and in last year things are still developing but perhaps not as fast as before,” a Western consultant who makes regular trips to North Korea told Reuters.

Kim, who vowed not to let the people “tighten their belt again” in his first-ever public speech in 2012, announced in April a shift in focus from nuclear programs to the economy. Analysts say that will be difficult while sanctions remain in place.

“I don’t think there is an outcry in the markets now, but there could be one toward the end of this year,” said Kim Byeong-yeon, a North Korea economy specialist at the Seoul National University.