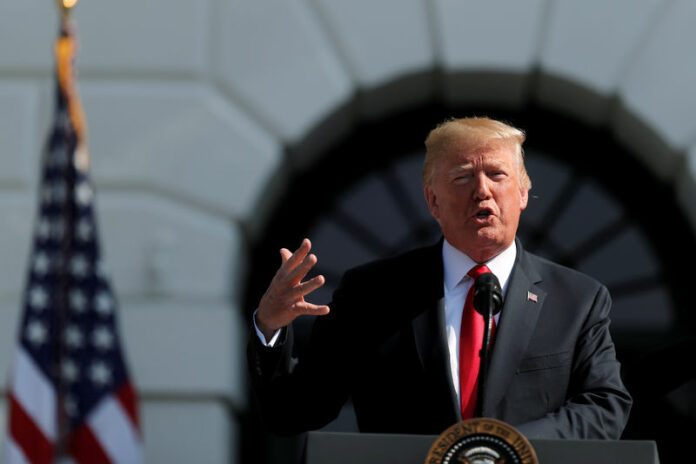 Where is Trump headed with his tougher policy toward Iran? 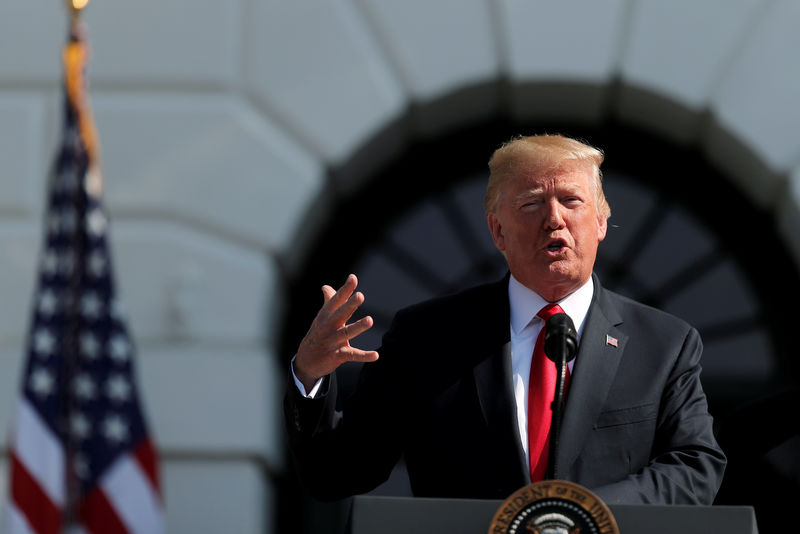 © Reuters. U.S. President Trump delivers remarks on the South Lawn of the White House in Washington

WASHINGTON (Reuters) – President Donald Trump’s offer of dialogue with Tehran belies a hardening of U.S. policy that intensifies economic and diplomatic pressure but so far stops short of using his military to more aggressively counter Iran and its proxies.

U.S. officials tell Reuters that the goal of Trump’s push is to curb Iranian behavior, which America, its Gulf allies and Israel say has fueled instability in the region through Tehran’s support for militant groups.

Trump has also voiced hope for a stronger agreement with Iran to prevent its pursuit of nuclear weaponry than the 2015 deal between Tehran and world powers which Trump pulled out of in May.

But the U.S. government has not clearly defined its desired end state for its Iran policy or outlined a face-saving path for Iran’s rulers that would allow them to deescalate steadily mounting tensions between Washington and Tehran, experts say.

That has raised concerns of an increasing risk of confrontation. Significantly, Trump has also not articulated what he would do if his policies were to destabilize Tehran, which has been at odds with Washington since Iran’s 1979 Islamic Revolution, or if U.S. pressure were to embolden hardliners.

Iran’s President Hassan Rouhani warned on July 22 that hostile U.S. policies could lead to “the mother of all wars.”

Trump responded on Twitter that Iran must never again threaten the United States or it would suffer “consequences the likes of which few throughout history have ever suffered before.”

Trump significantly softened his tone on Monday, saying he would meet Rouhani without preconditions. Both men are expected to address the annual United Nations gathering of world leaders on the same day in September, according to a tentative list of speakers.

Iran views the United States as acting in bad faith by withdrawing from a deal that it helped negotiate and has long blamed Washington for stoking instability in the Middle East.

“Sanctions and pressures are the exact opposite of dialogue,” Bahram Qasemi was quoted as saying by Fars news agency. “How can Trump prove to the Iranian nation that his comments of last night reflect a true intention for negotiation and have not been expressed for populist gains?” he added.

Trump’s policy is already putting significant pressure on the Iranian economy, although U.S. intelligence suggests that may rally Iranians against the United States and strengthen Iran’s hardline rulers, officials say.

Iran’s currency plumbed new depths on Monday, dropping past 120,000 rials to the dollar, as Iranians brace for Aug. 7 when Washington is due to reimpose a first lot of economic sanctions following Trump’s withdrawal from the nuclear deal.

This includes reimposing sanctions on Iran’s purchases of U.S. dollars as well as its trade in gold and precious metals.

Iran’s oil exports could fall by as much as two-thirds due to the sanctions, straining oil markets.

Israel’s Prime Minister Benjamin Netanyahu has strongly supported Trump’s actions, and Israel’s energy minister has said he believes the sanctions could bring Iran to a decision point within months.

The Trump administration has also launched an offensive of speeches and online communications meant to foment unrest and help pressure Iran to end its nuclear program and its support of militant groups, according to U.S. officials.

As part of that effort, U.S. Secretary of State Mike Pompeo on July 22 compared Iran’s leaders to a “mafia” and promised unspecified backing for Iranians unhappy with their government.

The Trump administration is also pushing ahead with a bid to create a new security and political alliance with six Gulf Arab states plus Egypt and Jordan, in part to counter Iran’s expanding influence.

The plan to forge what officials in the White House and Middle East have called an “Arab NATO” of Sunni Muslim allies would likely contribute to tensions with Shi’ite Iran.

But similar initiatives by previous U.S. administrations to develop a more formal alliance with Gulf and Arab allies have failed in the past and it is unclear what, if any, U.S. military involvement there will be in the alliance.

One of the risks of emboldening regional allies, U.S. officials say, is that they could inadvertently trigger a conflict that could draw in the United States.

BUT NO REGIME CHANGE

The tougher U.S. posture on Iran has fueled speculation that Trump is seeking to promote enough unrest to potentially unseat Iran’s rulers.

But U.S. Defense Secretary Jim Mattis said on July 27 the Trump administration had not instituted a policy of regime change or collapse toward Iran.

“We need them to change their behavior on a number of threats that they can pose with their military, with their secret services, with their surrogates and with their proxies,” Mattis said.

There have been mixed messages from Trump’s administration about the military’s role in confronting Iranian influence. White House National Security Adviser John Bolton linked the U.S military presence in Syria to the “Iranian menace.”

The head of U.S. forces in the Middle East, General Joseph Votel, clarified that the U.S. military’s job in Syria was still strictly battling Islamic State militants, which are not linked to Iran. However, the presence of U.S. and U.S.-backed forces presents a de facto check on Iranian expansion.