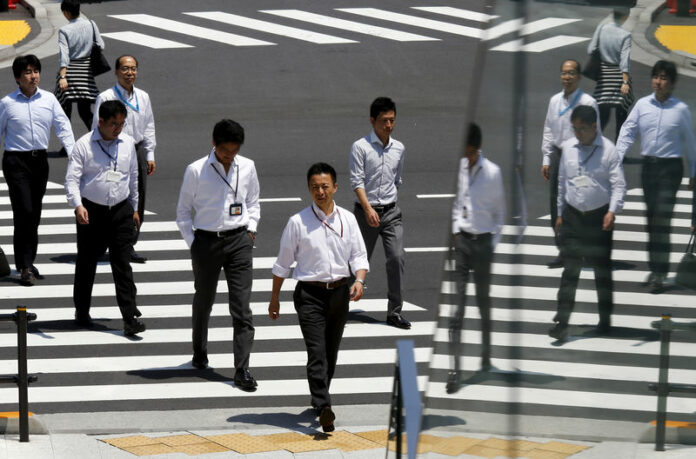 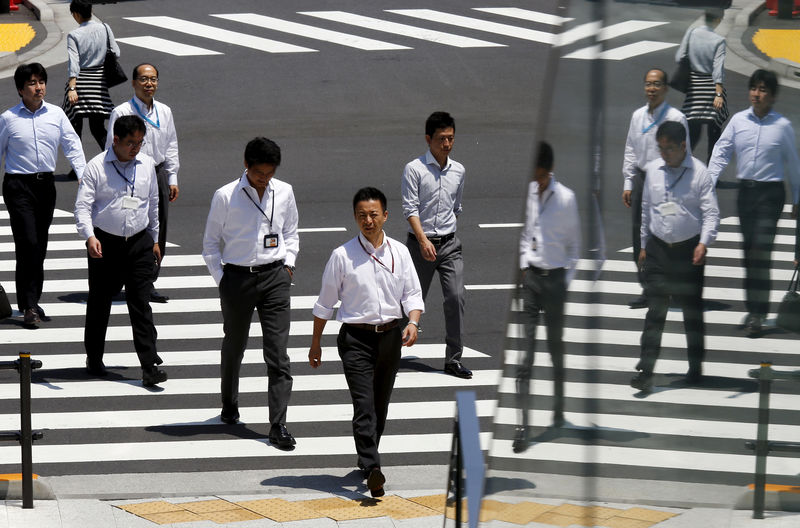 © Reuters. FILE PHOTO: Office workers are reflected in a glass railing as they cross street during lunch hour in Tokyo

By Stanley White and Naomi Tajitsu

TOKYO (Reuters) – Misaki Harada wants to quit her job as a receptionist at a restaurant management company in Tokyo and move into marketing for an apparel maker.

But the 24-year-old said she wanted more than just a bigger paycheck. Her next employer would need to improve her quality of life.

As Japan’s population dwindles, its companies are being forced to change how they attract job seekers like Harada from an ever-shrinking labor pool.

Nationwide, there are 1.62 jobs available for every job seeker, the strongest demand for labor in more than 44 years. The jobless rate is 2.4 percent, near a 25-year low, and real wages adjusted for inflation have fallen in five of the past six years.

Flexible working hours, personal benefits like day care and even rent assistance are now on the table alongside salary.

Such perks, common in the United States and Europe, are only just catching on Japan, which until recently relied on a culture of complete devotion to an employer in exchange for job security and steady pay increases.

Toyota, for instance, opened a 24-hour day care facility in April for shift workers at its plants near its headquarters in Toyota City.

“Japanese companies are becoming more flexible about when and where you work,” said Toshiaki Matsumoto, chief executive of HR Strategy, a human resources consultancy.

Some companies, like Jtekt Corp (T:), the world’s biggest supplier of vehicle steering systems, are simply moving some of their operations away from competition.

Jtekt last year cut the ribbon on a new technology development center in Akita Prefecture, northern Japan, known more for its rice, sake and namesake dog breed than engineering. The facility, which will develop technology for self-driving cars, is far from other companies hiring into the industry.

So far the company, a key supplier of Toyota Motor Corp (T:), has hired about 20 engineers and plans to roughly double its workforce by the end of the year.

“In larger cities, it’s difficult to get across the message that we are hiring because we’re competing with many companies for the same talent,” said Fukami Imai, the center’s representative director.

Denso Corp (T:), another Toyota supplier, took the opposite route, moving part of its self-driving research program to Tokyo because it is a more attractive locale than its headquarters in gritty Nagoya.

“Some companies are offering free food or subsidizing rent so workers can shorten commuting time,” Matsumoto said. “Some companies even provide counseling and time off for couples trying to conceive.”

Japan’s working-age population peaked in 1995 at 87 million and is forecast to fall to 45 million by 2065. Businesses slow to respond to that demographic change have been hit hard.

Silicon Technology, a semiconductor material maker, is running one rural plant at half-capacity because it can’t hire enough workers. Toyobo Co Ltd (T:) said it needs to ramp up production of film used in flat-panel displays, but can’t fully staff the production line.

Keeping employees from quitting – and not just throwing money at the problem – is another crucial piece of the labor puzzle, experts say.

“My new employer paid me more money, but the working hours were awful,” said Daisuke Okamoto, 42, an accountant who left a job in advertising in April for a position at a consumer goods company. “At first, I had a lot of regret. Now the company has given me more flexible working hours and the freedom to occasionally work from home, so I feel better about the job.”

Daikisangyo, which assembles plane fuselages and wings for Boeing Co (N:), was having trouble retaining new employees. Then it introduced a mentoring program that reduced turnover to zero, at least for now.

“It’s not just about the money anymore,” said Tsuyoshi Saso, a manager at Interworks, a nationwide recruitment site for jobs in manufacturing. “They also want to work in a positive work environment with good colleagues.”

Foreign workers can help fill some of the gaps, although they make up only about 2 percent of the current labor force, and companies hiring for “unskilled” positions like farm work must rely on trainees under an internship program that lasts up to five years.

The government has said it will create new categories for foreign workers with more limited skills, but will issue only a small number of such visas.

Mazda Motor Corp’s (T:) suppliers, which typically operate independently, are cooperating to figure out the best way to use artificial intelligence and robots to remove human workers from the equation altogether.

“Our goal is to create unmanned production lines that can operate 24 hours a day, 365 days a year,” said Masato Uno, chairman of the Hiroshima Manufacturing Engineering Association, a consortium of Mazda suppliers and IT companies. “We expect this to address problems with productivity and labor shortages.”