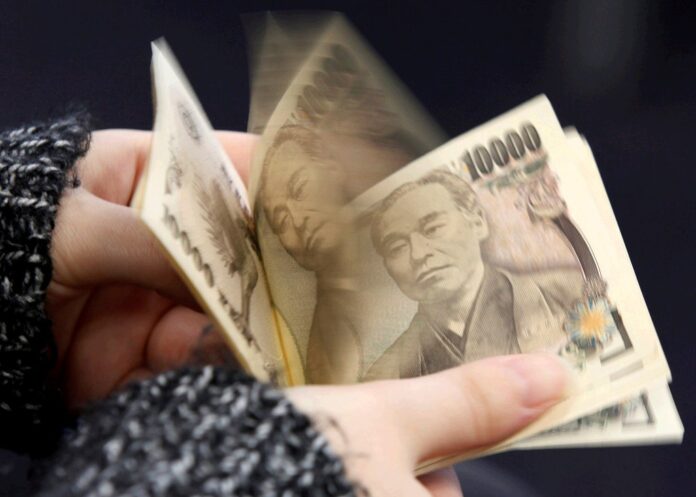 Yen knocked by BOJ decision, dollar firm ahead of Fed

NEW YORK: The dollar jumped against the yen on Tuesday, after the Bank of Japan said it intends to keep rates low for an “extended period of time,” and the greenback was firm against a basket of peers ahead of the conclusion of the U.S. Federal Reserve’s two-day monetary policy meeting on Wednesday.

The dollar was 0.69 percent higher against the yen, on pace for its best day in nearly three weeks, and was set to finish the month 1 percent higher, its second straight monthly gain.

“Clearly the yen is struggling as a result of the Bank of Japan announcement overnight,” said Omer Esiner, chief market analyst at Commonwealth Foreign Exchange in Washington.

At a two-day rate review that ended on Tuesday, the Bank of Japan kept its interest rate targets steady but for the first time adopted a forward guidance on future policy.

“I think there was some expectation leading up to this meeting that we could see a more meaningful shift in BOJ policy, particularly with respect to their huge asset purchase,” said Esiner.

“The BOJ has now effectively been taken off the table as a potential driver of the yen. The market can go back to focusing on more U.S.-centric developments,” he said.

The U.S. dollar index, which measures the greenback against a basket of six currencies, was up 0.19 percent at 94.504, as investors await the end of the Federal Open Market Committee meeting.

“In particular, investors will be on the lookout for any changes to the bank’s outlook for growth or inflation and any increased concern related to protectionism or trade uncertainty,” said Esiner.

The dollar index, which has risen 2.6 percent for the year, was on pace to finish July down 0.2 percent, its first monthly decline since March.

“Buying sentiment towards the dollar could receive a boost if the central bank strikes a hawkish tone,” Lukman Otunuga, research analyst at futures brokerage FXTM in London, said in a note.

With savings at lofty levels and lower taxes increasing take-home pay for some workers, consumer spending is likely to remain strong this year and allow the Federal Reserve to continue gradually raising interest rates.

The British pound slid below $1.31 as investors prepared for a Bank of England policy meeting this week at which markets are now pricing in a near-90 percent chance of a 25 basis points rate rise.

The Chinese yuan rose against the dollar on Tuesday in offshore trading after Bloomberg reported the United States and China aim to resume talks in a bid to avert a trade war between the world’s two biggest economies. Spokespersons for the White House, Treasury, and U.S. Trade Representative all declined comment on the report.