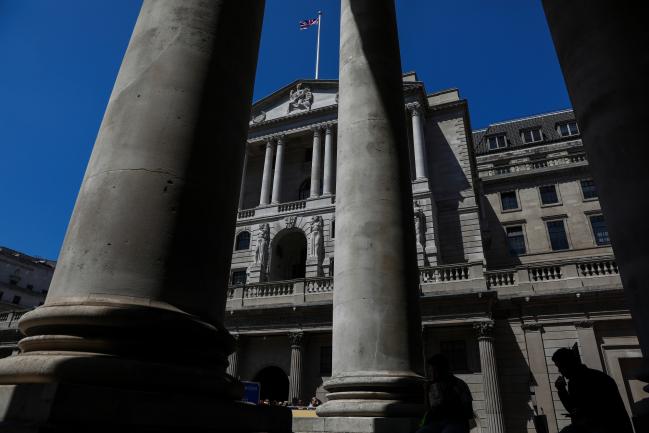 © Bloomberg. A Union flag, also known as the Union Jack, flies above the Bank of England (BOE) in the City of London, U.K., on Wednesday, June 27, 2018. The BOE stepped up pressure on the European Union to remove the threat that Brexit poses to trillions of pounds of derivative contracts. Photographer: Simon Dawson/Bloomberg

(Bloomberg) — The Bank of England is on track to raise interest rates for only the second time since the financial crisis, even though Brexit threatens to prove a rough ride for the U.K. economy.

The majority of economists surveyed by Bloomberg expect a quarter-point increase to 0.75 percent on Thursday, the highest since 2009, and investors are pricing it in with near certainty. Yet few anticipate a unanimous decision. A 7-2 split is seen as the mostly likely outcome, with Jon Cunliffe and Dave Ramsden expected to vote to keep rates where they are.

Officials led by Governor Mark Carney are judging whether the economy is overcoming the slowdown it saw at the start of the year, or whether it’s being fundamentally weakened by risks such as the faltering Brexit negotiations and global trade disputes. Some commentators say the U.K. is still too fragile and that any rate hike could end up being reversed within months.

The decision will be published at noon, alongside a statement, minutes of the Monetary Policy Committee’s deliberations and the Inflation Report, including new forecasts. Carney will take questions at a press conference 30 minutes later.

There are signs of a second-quarter pickup in growth. Retail sales bounced in April and May and joblessness is the lowest since the 1970s, but the backdrop may still be too weak to withstand tighter policy. The U.K. was the only Group of Seven country to see its expansion slow in 2017 and is forecast to lose further momentum this year.

Investors also will be looking for clues about the path of future rates. With the inflation rate at 2.4 percent and forecasts showing it will slip closer to the central bank’s 2 percent target, Carney may choose to strike a dovish tone at his press conference. It’s likely he’ll repeat his favored language, describing future increases as limited and gradual.

The BOE’s scope for further moves will be tested as the U.K. moves closer to next year’s Brexit deadline. The lack of clarity around the shape of Britain’s future relationship with the European Union means the path of growth — and the central bank’s response — could look very different depending on what trading agreements can be reached.

Central banks the world over are considering whether they can lifting borrowing costs without undermining the economy. The U.S. Federal Reserve, which kept policy unchanged on Wednesday, has slowly been raising borrowing costs for more than two years, while the Bank of Japan said Tuesday that it will keep rates at extremely low levels for an extended period. The ECB is ending a bond-purchasing program at the end of this year and will consider higher rates in the second half of 2019.

Despite the risks for the BOE, money markets are optimistic policy makers will deliver a hike this time. The probability priced in by traders has been steadily building in recent weeks, and 83 percent of economists see it as a done deal.

It’s not only about the main decision though. For the first time, the central bank will also provide an assessment of r*, the rate that keeps the economy neither too hot nor too cool over the long term. The publication could help indicate where officials see the benchmark settling as they move away from ultra-loose monetary policy put in place in the wake of the financial crisis.