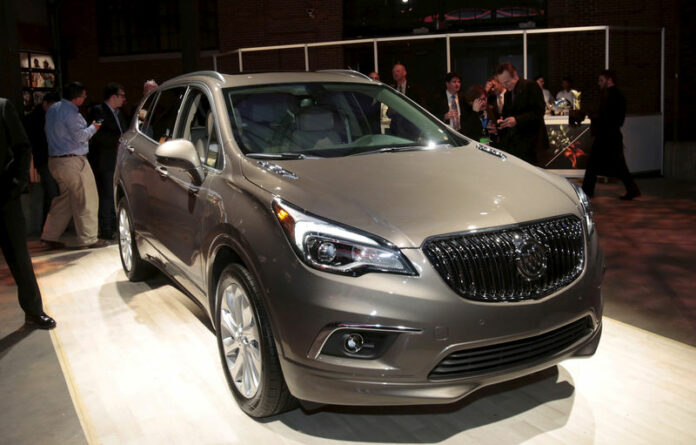 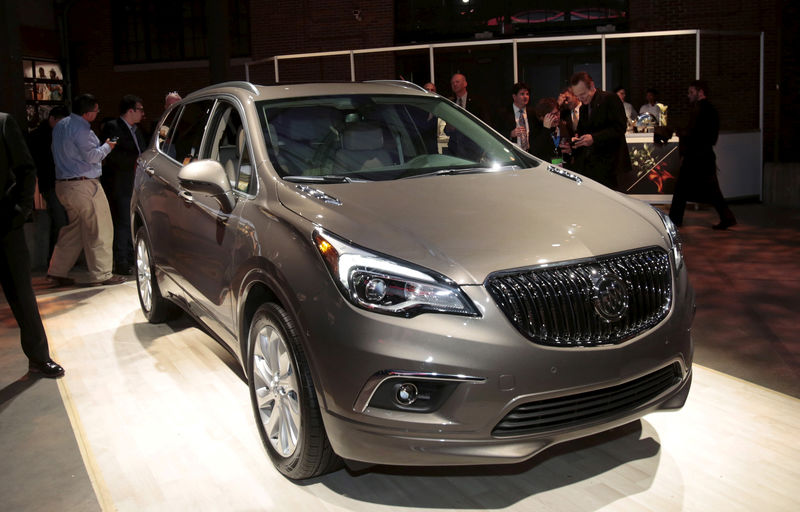 © Reuters. FILE PHOTO: General Motors Co. displays its U.S. version of the Buick Envision crossover during a media event before the start of the North American International Auto Show in Detroit

By Paul Lienert and David Shepardson

(Reuters) – General Motors Co (N:) is seeking an exemption to a 25 percent U.S. tariff on its Chinese-made Buick Envision sport utility, the automaker said on Thursday, in a move to prevent the key model in the brand’s U.S. lineup from becoming a victim of the U.S.-China trade war.

The midsize SUV, priced starting at about $35,000, has become a target for critics of Chinese-made goods, including leaders of the United Auto Workers union and members in key political swing states such as Michigan and Ohio. The Envision, assembled only in China, last year accounted for about 19 percent of Buick brand sales in the United States.

GM said in a statement that it filed the request on July 30 with the U.S. Trade Representative. An official notice was posted on Thursday on the regulations.gov website, which is tracking requests for exclusions from the so-called Section 301 tariff on certain imported goods from China.

GM, the largest U.S. automaker, argued in its request that Envision sales in China and the United States would generate funds “to invest in our U.S. manufacturing facilities and to develop the next generation of automotive technology in the United States.”

Because of the lower U.S. sales volume, “assembly in our home market is not an option” for the Envision, which competes with such mid-size crossover vehicles as the Jeep Grand Cherokee and the Cadillac XT5.

GM has taken other steps to soften the blow of tariffs, which hit just as the automaker had lowered the price of the Envision to make it more competitive.

Ahead of the July 6 start for higher import tariffs, GM shipped in a six-month supply of Envisions at the much lower 2.5 percent tariff rate.

Envision sales from April through June plunged to just 7,000 vehicles, while inventories climbed to more than 13,000 vehicles at the end of June. At the current sales rate, the Envision supply should be enough to keep many dealers stocked through the end of the year.

GM had lowered prices by as much as $2,500 on the 2019 models, which it started shipping in late April. That means Buick’s 2,000 U.S. dealers should have lower-priced Envisions to sell well into the fall.

“The previous price point was too high” on the 2018 Envision, said Casey Clark, sales manager at Serra Buick GMC Cadillac in Washington, Michigan, in an interview. “That put off some customers.”

With help from GM, Casey said, the mid-Michigan dealership has been able to offer hefty discounts on Envision of $5,000 and more.

GM has announced no plans to stop U.S. sales of the Envision or to relocate production of U.S.-bound models to another plant outside China, a source familiar with the company’s strategy said on condition of anonymity.

GM has provided Buick dealers with incentives to keep Envisions in stock. These include financial offers to put Envisions into fleets of vehicles loaned to customers whose cars are being repaired, the source said.

This year, GM plans to cut Envision imports to around 35,000 vehicles, more than half of which will be hit with the higher tariff, the source said.