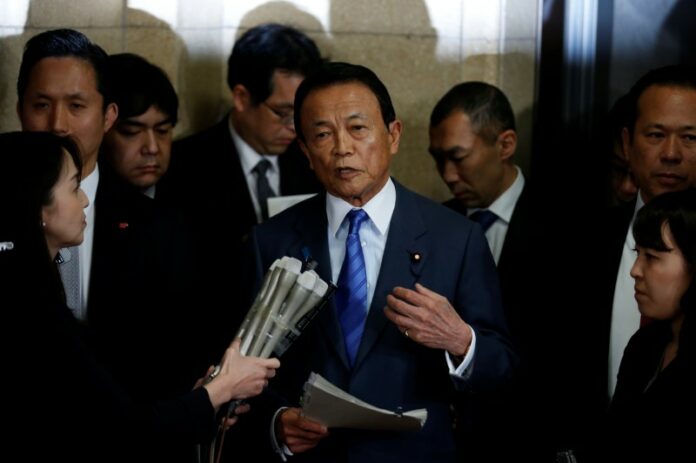 TOKYO (Reuters) – Japan is considering creating a sovereign wealth fund to invest in U.S. infrastructure projects and U.S.-Japan joint projects in third countries and will float the idea at two-way trade talks in Washington next week, the daily reported on Friday.

Tokyo is seeking ways to counter U.S. pressure for a bilateral free trade agreement (FTA) and head off a rise in tariffs on its auto exports when Economy Minister Toshimitsu Motegi meets U.S. Trade Representative Robert Lighthizer in Washington on Aug. 9.

Motegi told a news conference on Friday that he wanted to “take some ideas” to the talks, adding Japan would not make concessions that would hurt its national interests.

Finance Minister Taro Aso said separately that Japan was in various talks with the United States on infrastructure, but had no specific plan to set up a sovereign wealth fund.

“Japan and the United States are holding various discussions in this area, but at the moment there’s no concrete consideration toward establishing a fund,” Aso told reporters at a regular news briefing.

The Nikkei said that Japan would raise capital from the private sector through bond issues as early as the business year beginning April 2019 and provide low-cost government and possibly public-private loans, taking advantage of the Bank of Japan’s hyper-easy monetary policy.

It added that the size of the fund has yet to be determined.

The proposal for the fund also urges converting money raised into foreign currency if the yen strengthens beyond around 100 yen to the dollar, a move that might open Japan to criticism of currency manipulation to keep the yen weak, Nikkei added.

Japanese Deputy Chief Cabinet Secretary Yasutoshi Nishimura told Reuters on Wednesday that Japanese firms were keen to invest in the robust U.S. market and that the government wants to “firmly support and back that”. He did not elaborate.

The reported proposal comes after U.S. Secretary of State Mike Pompeo this week announced a $113 million initiative in technology, energy and infrastructure in Asia and a trilateral push by the United States, Australia and Japan to invest in regional infrastructure projects.

Trump wants a two-way trade pact as a way to cut America’s trade deficit with Japan but Tokyo is wary because an FTA would boost pressure to open sensitive markets such as agriculture.

Nishimura and other Japanese officials have said Japan is expected to increase its imports of liquefied from America and buy U.S. military gear needed for its defense, both of which would help reduce the trade imbalance.

But he ruled out setting a numerical limit on Japanese auto exports to the United States, a tactic taken during trade wars in the 1980s and early 1990s, before the 1995 launch of the World Trade Organization, which generally bans such steps.