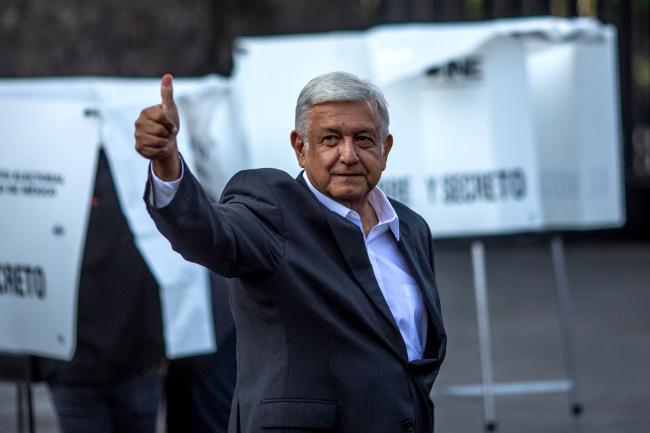 (Bloomberg) — Andres Manuel Lopez Obrador, elected president of Mexico last month by a landslide, plans to use that mandate to chart a new course to addressing the nationwide surge in violent crime over the past decade.

Known as AMLO, the 64-year-old president elect is proposing a simple yet radical departure from his predecessors’ crime-fighting policies. Rather than wage a war on crime, his administration will seek to reduce violent crime by attacking its roots, which he’s identified as poverty, corruption and impunity.

Skeptics may see it as naïve, but Mexicans are tired of record levels of bloodshed and the response to his crime and security agenda from an audience of crime victims’ families this week suggests they’re open to a new approach.

Speaking in Ciudad Juarez — where 26 people were killed in one 24-hour period last week — he told his listeners that he’ll focus on job growth and economic opportunities for young Mexicans to keep them from turning to crime. He also pledged to make the criminal justice system more flexible — including the possibility of an amnesty program — with the aim of rebuilding civil society. By the time he had finished his remarks, six more people were killed in the city of roughly 1.3 million on the U.S.-Mexico border.

“You cannot confront violence with violence. We won’t forget, but we will forgive,” said Lopez Obrador Tuesday afternoon as he launched what he’s called a public peace-building forum, an idea he advocated for during his presidential campaign.

Lopez Obrador is taking office during the most violent era in Mexico’s modern history — total murders in 2017 were the highest on record reaching more than 31,000, and 2018 will likely be worse given a 16 percent increase in the homicide rate in the first half of 2018 compared to the same period in 2017.

The spike in violence isn’t recent though. Then-President Felipe Calderon launched a military offensive against organized crime in 2006 with the objective of capturing drug lords such as Joaquin “El Chapo” Guzman. For more than a decade, the military confronted cartel armies and captured kingpins, splintering criminal organizations as violence surged. From 2006 to 2017, there were an estimated 235,000 homicides in Mexico, according to the National Institute for Statistics and Geography.

“AMLO recognizes that the past security strategy has completely failed,” said Eduardo Arcos, a Mexico-focused associate analyst at Control Risks. “The country is increasingly violent after two six-year terms,” he said, referring to Calderon and outgoing President Enrique Pena Nieto, who continued Calderon’s anti-crime policies and strengthened the military’s role in law enforcement.

Read more – AMLO’s Got a Mandate. What Comes Next for Mexico?: QuickTake

“This is good indication of change in the security approach, but we’re missing details on concrete mechanisms,” Arcos said.

Lopez Obrador faces high expectations from his electorate to make Mexico safer. In a survey from July 23, 65 percent of participants said they expected security to improve under AMLO, according to Mexico City-based political analysis firm, Consulta Mitofsky.

Lopez Obrador says he will pivot from heavy-handed military confrontation to socioeconomic policies to provide economic opportunities for youth while rooting out corruption. Alejandro Hope, a Mexico City-based security consultant, sees Lopez Obrador’s ideas as being on the right track for long-term improvement, though they would do little to reduce violence in the short term.

“The country is tired of the violence,” Hope said. “But a transitional justice approach is judicially complicated and politically explosive — I don’t know if they’ve calibrated that cost,” Hope said.

The evolution of the violence epidemic in Mexico has ensnared Mexican cities that were once buzzing with tourism like Acapulco, and industrial centers like Tamaulipas, Veracruz and Tabasco, which are linchpins of the energy industry. Up-and-coming states like Puebla and Guanajuato have been victimized by oil-pipeline robberies, and thieves, known as ‘huachicoleros,’ have boldly taken to blockading highways leading to the capital. Other types of crime such as extortion, human trafficking and human smuggling have proliferated.

Lopez Obrador, who takes office Dec. 1, has almost four months to flesh out his security agenda, but the peace forum directly responds to the outcry from his base. As civilian casualties rise, civil society organizations like Mexico United Against Delinquency have emerged to assist victims of organized crime by building a bridge to the state institutions that have some power to redress victims and their families.

According to Lisa Sanchez, the Director of Mexico United Against Delinquency, the forum on national pacification could work, but it should be accompanied with clear reforms on judicial governance, which would put more emphasis on investigation rather than confrontation.

“Politicians often generalize the violence, calling it ‘isolated cases’,” Sanchez said. “Victims want to be recognized, and they want the state to comply with their mandate of security, which is central to Lopez Obrador’s promise of combating corruption.”

On Wednesday afternoon, Lopez Obrador was back in Mexico City, to officially accept the title president-elect. In a televised speech, he highlighted the importance of reducing corruption and impunity once in office.

“Our objective is to reformulate the security policy that is almost exclusively based on the use of force,” Lopez Obrador said in a televised speech.