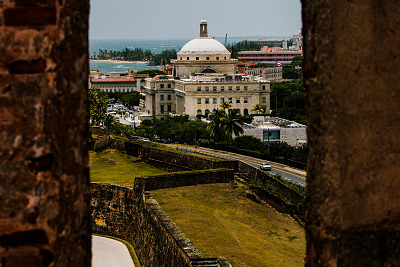 © Bloomberg. The Capitol Building is seen past walls in the Old City of San Juan, Puerto Rico, on Wednesday, July 8, 2015. Photographer: Bloomberg/Bloomberg

By mid-day, MBIA jumped as much as 11% to the highest intraday since January 2017, and Ambac gained as much as 12% to its highest since March 2017, while Assured Guaranty rose as much as 5.5% to the since last September.

“We would expect a very positive reaction” from MBIA’s shares “given its concentrated exposure, though Assured Guaranty should see a positive reaction as well given the agreement can serve as a blueprint for future settlements on other Puerto Rico exposures,” KBW analyst Bose George writes in a note.

MBIA has about $700 million of par exposure to senior Cofina bonds, MKM analyst Harry Fong wrote in a note. While the proposed Cofina settlement may result in a small loss for the insurer, “we think certainty is better than uncertainty,” Fong said.

Resolving Puerto Rico’s debt situation “is a significant positive development” for Ambac, Fong wrote in a separate note. That insurer, with Cofinas accounting for about $805 million of its total Puerto Rico exposure of about $2.0 billion, has also likely reserved enough for an expected loss. “The small loss was acceptable over a long court battle where the outcome included significant uncertainty,” Fong said. Ambac may start to explore options beyond bond insurance once its Puerto Rico issues are settled, he added.

But the gain in equities pales before gains in fixed income. Puerto Rico bonds soared as much as 30 percent after the settlement was announced. Five-year credit default swaps tied to MBIA debt tightened 58.1 basis points to 324.2 basis points at 2:15 in New York, according to data provider CMA. That’s the biggest decline since July 2017.

On MBIA’s earlier conference call, CEO William Fallon said the company insures approximately $1.2 billion of accreted value of Cofina senior bonds. “While there are many steps required to confirm the Cofina settlement, a December confirmation date has been targeted,” Fallon said, adding that MBIA doesn’t anticipate any material change up or down to the reserves as of its filing on Wednesday.

On Ambac’s earlier second-quarter conference call, CEO Claude LeBlanc declined to comment about the Cofina deal “because of the confidential nature of mediation,” and because “the in-house transaction is subject to final terms as support in separate definitive written agreements.”