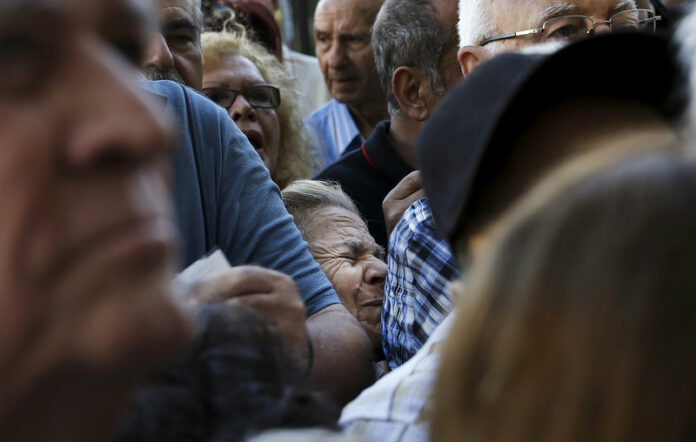 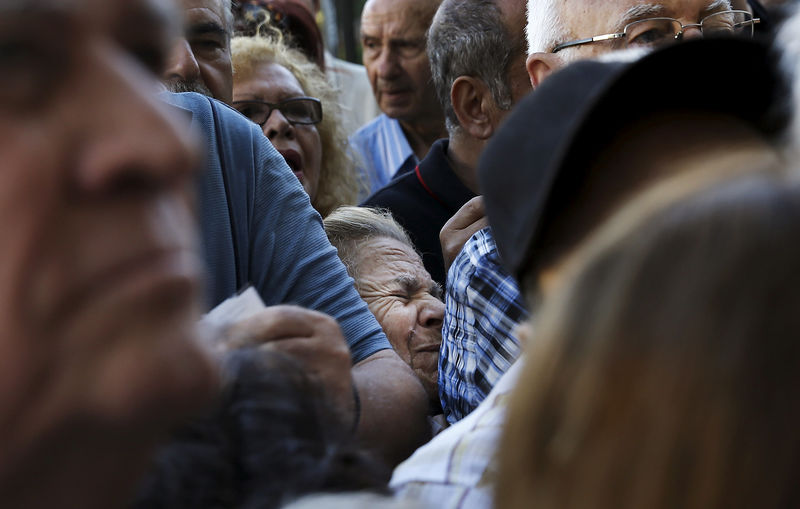 © Reuters. FILE PHOTO: A pensioner is squeezed as she waits outside a National Bank branch to receive part of her pension in Athens

By George Georgiopoulos and Lefteris Papadimas

ATHENS (Reuters) – Greece exits the last of its three bailouts on Aug. 20 and hopes to be able to borrow again in international markets after a nearly nine-year debt crisis that shrank the economy by a quarter and forced it to implement painful austerity measures.

The crisis has proven deeply traumatic for Greeks who had enthusiastically swapped drachmas for euros in 2001. Adoption of the single currency ushered in an era of cheap credit that funded a splurge in private consumption and public spending that sent Greece’s budget and current deficits ballooning.

Since the debt crisis exploded in early 2010, four successive governments have fought to keep bankruptcy at bay, relying on the biggest bailout in economic history, more than 260 billion euros lent by Greece’s euro zone partners and the IMF.

As Athens now eyes a return to normality and reclaiming its economic sovereignty, the scars remain – banks are saddled with huge bad loan portfolios and Greece’s public debt load is still the highest in the euro zone, at 180 percent of national output.

But sunshine is breaking through the clouds. The economy, which shrank by 26 percent in the crisis years, has started to grow, tourism is booming and unemployment is slowly coming down – to 19.5 percent from a peak of almost 28 percent.

“If there is a lesson that we learned from the crisis it is that, under any circumstances, you must try to protect macroeconomic stability,” said Panos Tsakloglou, chief economist of the previous coalition government.

“Populist policies that may win some votes today and have disastrous effects some years down the road must be avoided at all costs. Otherwise, sooner or later we will end up in the situation we are in now,” he said.

OUT OF INTENSIVE CARE

Greece’s economy grew for a fifth straight quarter in January-to-March, the expansion picking up pace to a yearly 2.3 percent, a sign the recovery is gaining traction, helped by net exports. The EU Commission sees 1.9 percent growth this year.

But scepticism remains, including at the International Monetary Fund which sees the recovery strengthening and growth reaching 2 percent this year and 2.4 percent in 2019, but says that “external and domestic risks are tilted to the downside”.

Post–bailout, Athens has committed to attain primary budget surpluses – excluding debt servicing outlays – of 3.5 percent of GDP until 2022, and 2.2 percent until 2060.

Debt relief agreed with Greece’s euro zone partners in June, which extends maturities on some loans and softens the interest rate burden on others, will help cushion the country’s return to markets.

These debt relief measures, coupled with a 24 billion euro cash buffer, will help to improve debt sustainability over the medium term, facilitating Greece’s access to markets.

But the IMF says long-term sustainability remains uncertain and a “realistic” rethink is needed on assumptions for primary balance targets and economic growth.

“I don’t see a reason for jubilation concerning our exiting the memorandum (bailout) because … you may be jumping out of the frying pan into the fire,” said Thanos Veremis, emeritus professor of history at Athens University.

“Most people have been taxed dry, people are completely immersed in paying the tax man, with little money left on the side to put into your business and therefore improve and grow.”