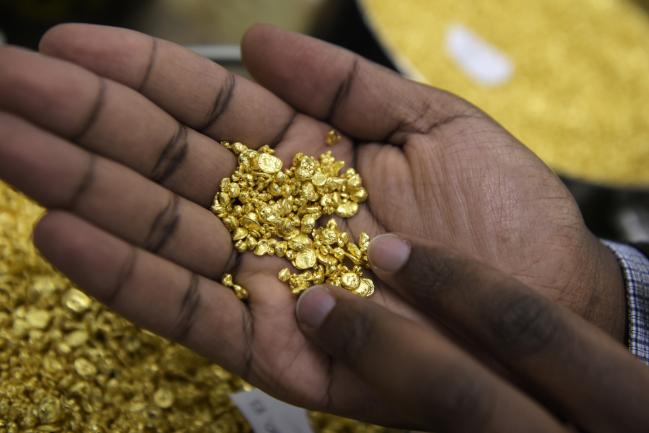 Hedge Funds Went Short on Metals Just Before the Sell-Off

© Bloomberg. An employee holds a handful of gold granules at the Perth Mint Refinery, operated by Gold Corp., in Perth, Australia, on Thursday, Aug. 9, 2018. Demand for coins and minted bars was a little sluggish over the past year as Donald Trump’s earlier win in the presidential poll prompted investors to divert funds into stocks, bonds and property, said Perth Mint’s Chief Executive Officer Richard Hayes on Aug. 8. Photographer: Carla Gottgens/Bloomberg

(Bloomberg) — Commodity markets have gone haywire — and hedge funds with picture-perfect timing are set to rake in stellar profits.

Hedge funds’ net position stood at a negative 51 percent in precious metals and negative 37 percent in base metals as of Tuesday, according to Credit Suisse Group AG prime services.

Never before have the metals in aggregate been shorted to this degree show the data, which captures client exposures to commodity futures and exchange-traded funds since 2010.

The bet has proved prescient. Gold fell to its lowest price since January 2017 on Wednesday amid dollar strength, while industrial metals had their biggest one-day tumble in nearly seven years as negative sentiment in China and Turkey fueled a global risk-off.

“It was very unique to have both shorts at these levels, and obviously profitable,” said Mark Connors, head of risk advisory at the Swiss bank.

Base metals pared some losses Thursday, a bounce attributed to signs of thawing trade tensions. gained 2.2 percent after their worst one-day sell-off in over three years.

Yet the recovery could prove a head-fake, if it’s been exacerbated by smart-money traders taking profit from shorts that would have paid off handsomely amid the carnage.

“This certainly can be a short-lived tactical move by funds in base metals,” said Connors.