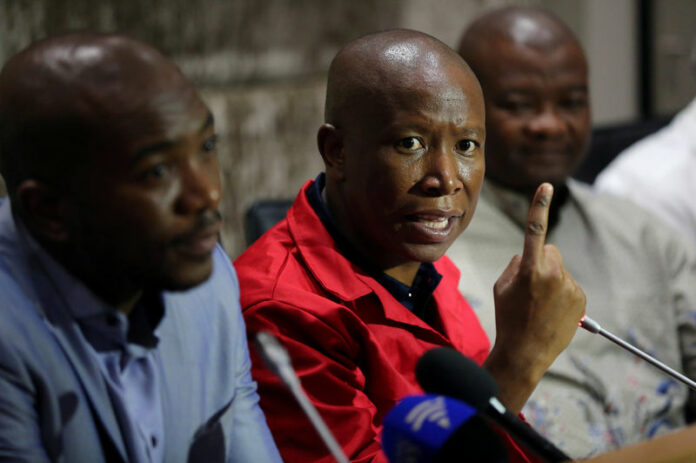 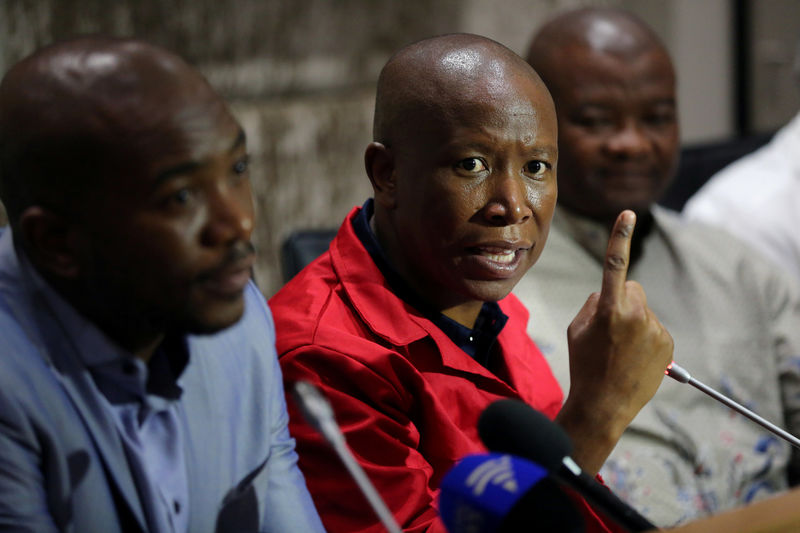 By Olivia Kumwenda-Mtambo and Wendell Roelf

JOHANNESBURG/CAPE TOWN (Reuters) – Opposition firebrand Julius Malema introduced a bill to nationalize South Africa’s central bank, raising pressure on the ruling ANC to go through with a plan it shelved this year and rattling markets wary of threats to the institution’s independence.

The rand fell more than 1 percent overnight after parliament released details on the bill late on Thursday, including clauses to “make the state the sole holder of the shares in the bank” and “provide for the appointment of certain board directors by the (finance) minister”.

Most central banks around the world are state-owned. But markets have been worried about moves to bring the privately-held South African Reserve Bank into government control – particularly after the past administration was accused of meddling in appointments and decisions.

Malema’s far-left Economic Freedom Fighters (EFF) party – with only 25 out of the country’s 400 parliamentary seats – would have no chance of pushing the bill through on its own.

But the ruling African National Congress (ANC) has backed the smaller party’s bills before – including divisive legislation in February pushing to expropriate white-owned land without compensation.

The ANC promised on Friday to study the proposed privatization – a policy it had said it would pursue in December, calling the central bank’s ownership status a “historical anomaly”. The party put the plan on the back-burner three months later, saying it needed more consultation.

“The ANC will … consult with the leadership of the caucus as well as the organization to determine its desirability based on ANC resolutions and policies on the matter,” said the ruling party’s parliamentary caucus spokeswoman, Nonceba Mhlauli.

The currency closed at 14.7275 versus dollar on Thursday and weakened further on Friday, driven by an emerging markets sell-off.

“With the independence of the central bank once again potentially in question, this combined with all of the other investor unfriendly headlines locally, (is) likely to keep the local unit on the back foot,” Nedbank analysts said.

On top of market concerns, the central bank has also warned buying-out private shareholders would be expensive as some existing investors are likely to sell their stakes at a premium.

South Africa’s central bank has been privately owned since it was established in 1921. But its shareholders have no control over monetary policy, financial stability policy or banking regulation.

Malema and his party did not make an immediate statement on their bill. But they have regularly argued for the nationalization of a wide range of assets – including mines and banks – and said the central bank should not be owned by private shareholders without a direct interest in the country.

The party – launched after Malema was expelled from the ANC in 2012 – has been pushing its plans to nationalize assets and to redress racial disparities in the build up to elections in 2019.

Despite the split, it has cooperated with the ANC on past legislation.

Together, the ANC, EFF and other small opposition parties could muster the two-thirds majority needed for a constitutional change to allow for land expropriation without compensation.