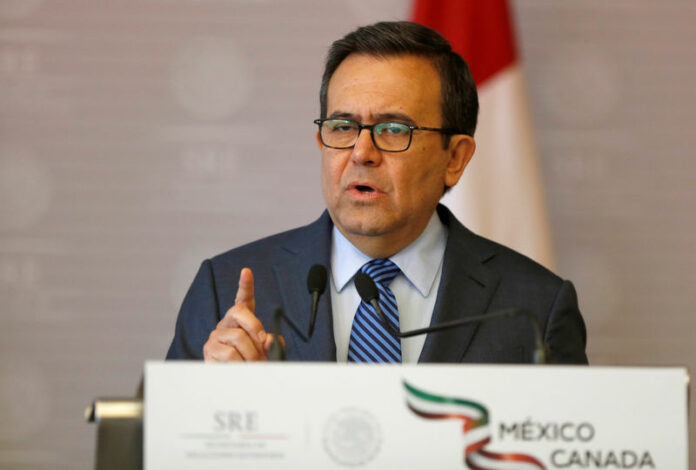 U.S.-Mexico bilateral NAFTA issues may be resolved next week: minister

WASHINGTON (Reuters) – Mexico’s economy minister Ildefonso Guajardo said on Friday he hopes to conclude by the middle of next week outstanding bilateral issues with the United States surrounding the renegotiation of the North American Free Trade Agreement (NAFTA).

“Hopefully we will be able to close up no later than the middle of the week,” Guajardo told reporters outside the U.S. Trade Representative’s office, adding that Canada could then rejoin the talks to rework the trade pact.

Most of the issues between Mexico and the United States are “advancing well,” the minister added.

Some areas related to auto rules of origin remain unresolved, including the time frame to implement changes in the new rules, while a “sunset clause” that could kill NAFTA after five years has not yet been discussed, Guajardo said.

Mexico’s foreign minister Luis Videgaray, in Washington with Guajardo for meetings with U.S. officials, also struck an optimistic note, saying “we are getting close” when asked about the likelihood of reaching a breakthrough.

U.S. Trade Representative Robert Lighthizer on Thursday had expressed hope for a breakthrough in the coming days. U.S. President Donald Trump, however, said alongside him he was in “no rush” to conclude talks on NAFTA, which he wants renegotiated in favor of the United States.

Trump argues the 24-year-old pact has facilitated an exodus of manufacturing jobs from the United States to Mexico, but NAFTA’s supporters say it has kept the region competitive.

The renegotiation has now dragged on for a year.

Mexican and U.S. ministers will meet again on Tuesday, Guajardo said, after a sectoral meeting on Monday to discuss financial issues related to government action.