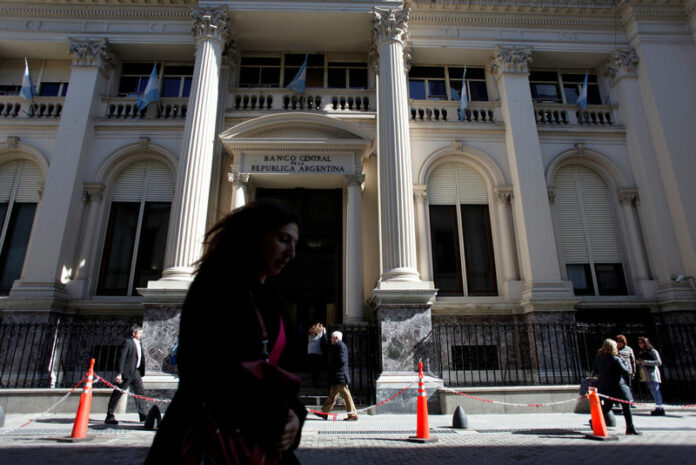 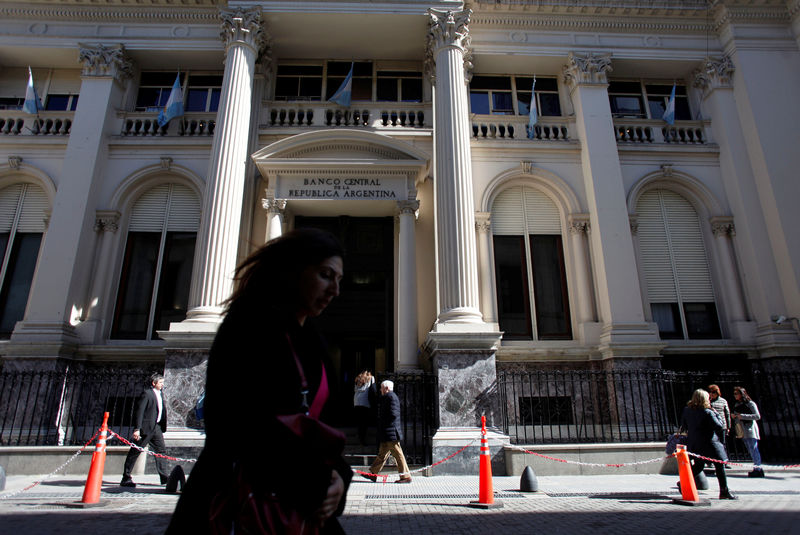 BUENOS AIRES (Reuters) – With interest rates sky-high and the economy heading for recession, Argentina’s President Mauricio Macri is running short of options to stem a slide in the peso, economists say, leaving the battered currency at the mercy of volatility in emerging markets.

Macri’s government has already taken a series of measures to restore confidence in the peso since it came under pressure in May, reviving memories of a painful 2002 economic crisis in Latin America’s third-largest economy.

The peso, which has fallen around 40 percent so far this year, rivals the Turkish lira as the world’s worst performing currency in 2018.

Argentina’s central bank hiked interest rates to 40 percent in May, and Macri sealed a $50-billion deal with the International Monetary Fund in June – removing the need for outside funding and briefly steadying the peso. His government has since announced more than $2 billion in budget savings.

Confidence in Argentina was also shaken by a major corruption scandal in the construction sector, expected to damage economic growth already hit by a drought that crippled vital agricultural production.

The peso has tumbled 8.5 percent against the dollar in the past two weeks despite Argentina’s central bank again hiking rates to 45 percent. On Wednesday, the bank was forced to sell $781 million in reserves to support the peso, before tightening reserve requirements a day later.

Such dizzying interest rates and the fiscal measures would normally be enough to halt a currency run but sentiment was being dictated by global events, said Alberto Bernal, chief strategist at XP Investments in New York.

“Seventy percent of the problems facing Argentina are external in nature,” Bernal said. “Macri needs luck … He needs Trump to go easier against China and Europe. He needs Erdogan to come to his senses and he needs a weaker dollar, which means he needs the U.S. Federal reserve to be a little less aggressive in its policy guidelines.”

While economists are urging Turkey’s Erdogan to adopt a series of policy measures to restore confidence in the economy – including strengthening central bank independence, raising interest rates and fiscal tightening – business-friendly Macri has already announced many of these.

A major challenge for Argentina is that interest rate rises have limited impact in fighting inflation because consumers and businesses use little credit after years of financial crises, economists say. Inflation jumped to 31 percent in June.

Similarly, on the fiscal front Macri’s options are limited. He has already suspended a reduction in soy export taxes and unveiled other fiscal measures worth around $2.2 billion in savings.

Yet a weakening economy leaves Macri with few policy levers to pull without inflicting further damage. Despite high expectations at the start of 2018, the currency crisis and drought have slammed Argentina’s $640 billion economy into reverse.

After growing 3.6 percent in the first quarter, the economy shrank 5.8 percent in May when the crisis struck, according to official statistics. It is due to re-enter recession in the third quarter, economists say, only two years after it returned to growth.

With Macri expected to seek a second four-year term next year, major spending cuts and tax rises are politically unpalatable.

Diego Ferro, partner and portfolio manager at Greylock Capital in New York, said that until recently investors had been happy with Argentina’s gradualist approach, but market turmoil had made them impatient for results from Macri’s government.

“They have shown that they are on the right path and under normal circumstances this would be enough,” said Ferro. “But after the disappointments they have suffered and the overall concern about emerging markets, it might not yet be enough to prompt a turnaround in the market.”

Some investors are also concerned that political pressures in Argentina will make it difficult to implement reforms. The changes to soy taxes have already proven unpopular with the farm lobby, a key base of his support.

Riot police were needed to control demonstrators in December when Congress passed pension changes. Unions have protested over planned labor reforms that have now stalled in the legislature, where there is resistance to the fiscal tightening required by the IMF deal.

Macri admitted on Friday that poverty would rise this year because of high inflation.

“He’s very constrained because of the social tensions that are blowing up due to the slowing economy,” said Buenos Aires-based economist Gustavo Ber.

Economists expect the economy to contract 0.3 percent this year and grow 1.5 percent next year, according to the most recent central bank survey.

Macri has defended his gradual approach to reform, saying it was needed to shelter ordinary Argentines from a drop in living standards.

Yet for some, Macri squandered an opportunity for sweeping change after he was elected in 2015 amid frustration with outgoing President Cristina Fernandez’s administration of 12 years of leftist rule.

“Macri is doing the right things but he’s doing them two years too late,” said Guillermo Nielsen, an economist and former finance secretary in the left-leaning government of Nestor Kirchner.

“He did not make the changes that the Argentine economy needed to get back to growth,” he said. “I don’t see Argentina coming back anytime soon.”