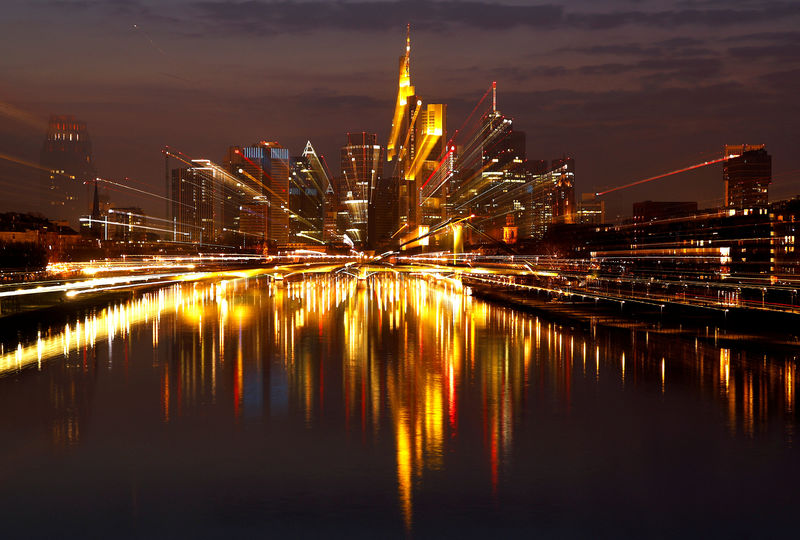 © Reuters. FILE PHOTO: The Frankfurt skyline with its financial district is photographed in the early evening in Frankfurt

FRANKFURT (Reuters) – Growth in Germany’s economy could slow a little in the third quarter, with private consumption driving the expansion and industry contributing little, the Bundesbank said on Monday.

Europe’s biggest economy shifted into higher gear in the second quarter, expanding faster than predicted, a relief for investors who feared a wobble that hit the euro zone in the first three months of the year might signal the end of the bloc’s five-year growth run.

“The German economy should remain on a solid growth path in the third quarter,” the central bank said in its monthly economic report. “However, the pace of expansion could be slightly lower than the average rate in the first half of the year.”

The economy grew by 0.5 percent in the second quarter and 0.4 percent in the first, with underlying growth momentum only “marginally” ahead of what the Bundesbank considers to be the economy’s potential.

With the euro zone expansion considered self-sustaining and employment at a record high, the European Central Bank has dialed back stimulus in several steps already, arguing that the bloc can afford somewhat less support after years of extraordinary help.

The Bundesbank said that while short-term manufacturing expectations had stabilized at elevated levels and order books were healthy, industry’s contribution to growth was likely to be modest, due in part to carmakers’ difficulty in adjusting to new emission measurement standards.

The central bank made no mention of the potential impact on Germany of worldwide trade tensions triggered by moves in Washington to ramp up tariffs on U.S. imports.

In reference to global manufacturing sentiment, it said trade disputes were unlikely to have been a decisive negative factor, but an escalation could significantly impact the global recovery.

In Germany, private consumption would continue to drive growth. “(It) …should benefit from a strong labor market and strong wage increases, thus retaining its role as a key pillar of growth,” the Bundesbank added.

It also predicted that the German government budget surplus would rise further this year and its debt could fall close to the European Commission’s benchmark of 60 percent of GDP by end of the year.