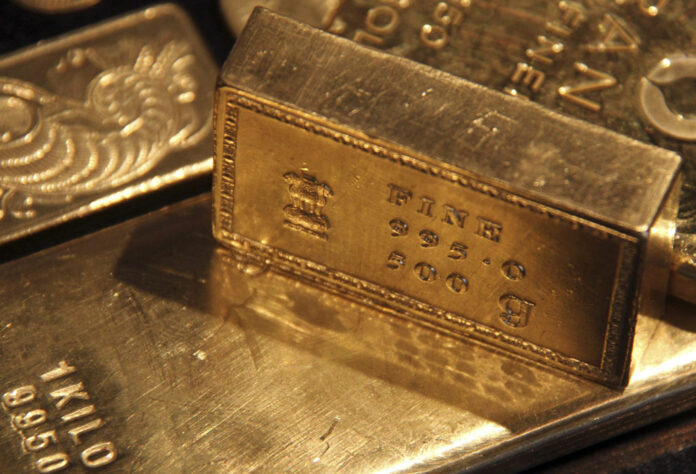 LONDON: Gold prices rose on Monday after touching a 19-month low last week as a strengthening currency in China made the metal cheaper for buyers in the world’s biggest gold consumer.

Gold has tumbled 13 percent from an April high as the dollar powered higher against the yuan and other currencies, raising the cost of dollar-priced bullion outside the United States.

That pressure has eased after news of U.S.-China trade talks planned for this week helped lift the yuan from its weakest in 19 months, said Saxo Bank analyst Ole Hansen.

But prices would have to move above $1,200 an ounce for speculative investors who have built large bets on lower prices to be shaken from their positions, he added.

“The bears who have been in control for weeks or even months have no reason to worry,” he said.

Bets on lower prices by hedge funds and money managers on the Comex exchange continue to build and outweigh bets on higher prices by 77,273 lots, the largest quantity ever recorded.

Holdings of gold backed exchange traded funds, meanwhile, have fallen by 4.1 million ounces, or 7 percent, since late May as investors exited positions.

Technical and momentum indicators suggest gold will fall towards support at its January 2017 low of $1,146.20, said analysts at ScotiaMocatta. Fibonacci resistance was at $1,185.30, they said.

Investors were looking ahead to Friday and a speech by U.S. Federal Reserve Chairman Jerome Powell at a conference in Jackson Hole in which he might give clues about the pace of U.S. interest rate rises, analysts said.

Any display of caution about rate rises could push the dollar lower and give gold a leg up.

In other precious metals, spot silver was down 0.2 percent at $14.73 an ounce after hitting its lowest since February 2016 last week.

Platinum rose 1.7 percent to $795 an ounce but remained close to its lowest in a decade, while palladium, , which last week traded at its weakest since July last year, was up 0.4 percent at $913.81 an ounce.