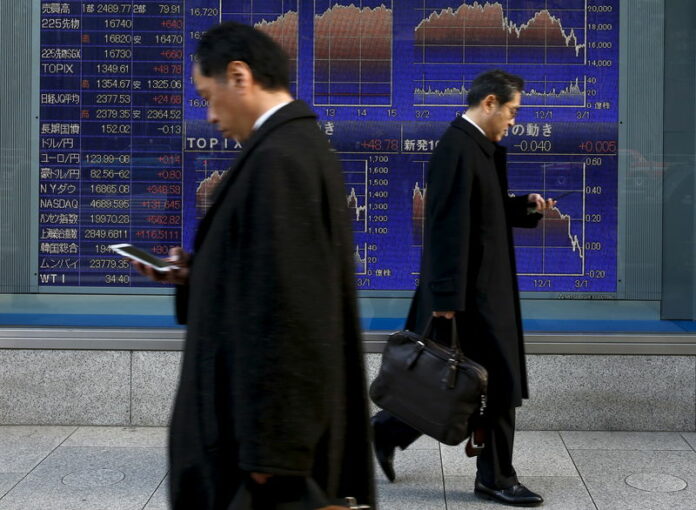 © Reuters. Men walk past an electronic board showing market indices outside a brokerage in Tokyo

TOKYO (Reuters) – Asian stocks rose on Tuesday, supported by hopes Beijing and Washington would dial back trade hostilities, though comments from the U.S. president about the yuan and Federal Reserve policy capped gains and weighed on the dollar.

In an interview with Reuters on Monday, President Donald Trump said that China was manipulating its currency to make up for having to pay tariffs imposed by Washington on some imports from China. This kept global trade conflict concerns alive and dented some of the market optimism ahead of upcoming U.S.-China trade talks.

He also said he believed the euro was being manipulated.

Wall Street’s major indexes rose on Monday on optimism over trade talks between the United States and China, though they fell from session highs after Trump’s comments. ()

Immediate focus was on the lower-level trade talks due to start this week between the United States and China. Speculation that the talks might help ease trade tensions has shored up the broader equity markets over the past few sessions.

Market optimism was tested, however, after Trump said he did not “anticipate much” from the discussions.

“Given the little progress made on the U.S.-China negotiations in the past six months, investors’ expectations are still low,” wrote Tai Hui, global market strategist at J.P. Morgan Asset Management.

“Ongoing negotiation is good news, and that’s what the market is riding on at this stage, but a sustainable agreement to end this tension still seems unlikely at this point.”

Chinese shares rose, with the Shanghai Composite Index () climbing more than 1 percent, helped by bargain hunting of consumer and healthcare firms after their recent slump.

In currency markets, the dollar came under pressure after Trump reiterated his displeasure at the Fed’s rate hikes, saying the central bank should do more to help him boost the U.S. economy.

“The Fed looked to have strengthened its hawkish stance at the August policy meeting. But since then, the side effects of the U.S.-China trade war have started to appear, and Republicans struggled to win a special election in Ohio,” said Daisuke Uno, chief strategist at Mitsui Sumitomo Bank in Tokyo.

“Against such a background, Trump’s latest jab at the Fed appears to have become stronger compared to the last time (in late July).”

The against a basket of six major currencies () was down 0.35 percent at 95.549, extending losses from the previous day.

China’s yuan has weakened to a 19-month low against the dollar earlier this month amid concerns towards the country’s economic growth, Sino-U.S. trade war worries and a broad rally by the dollar.

The yuan has since pulled back slightly from the trough, with the People’s Bank of China taking steps perceived by investors that the authorities were not going to allow the currency to keep depreciating indefinitely.

The yield on the 10-year U.S. Treasury note () was near a six-week low of 2.815 percent plumbed overnight in the wake of Trump’s interest rate comments.

Oil prices were mixed after gaining the previous day, when investors grew more concerned about an expected fall in supply from Iran due to U.S. sanctions. [O/R]