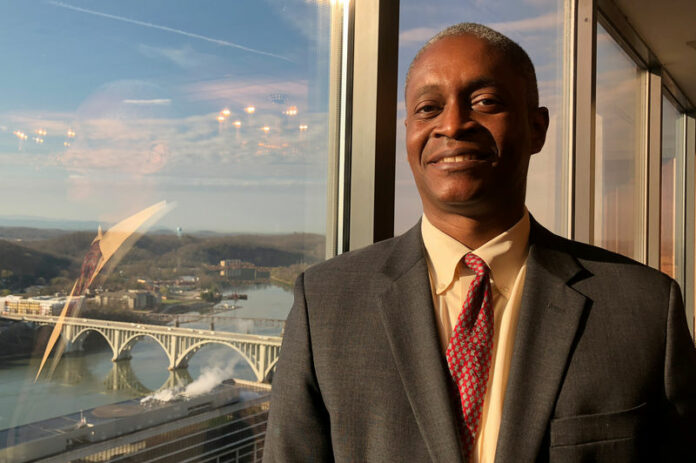 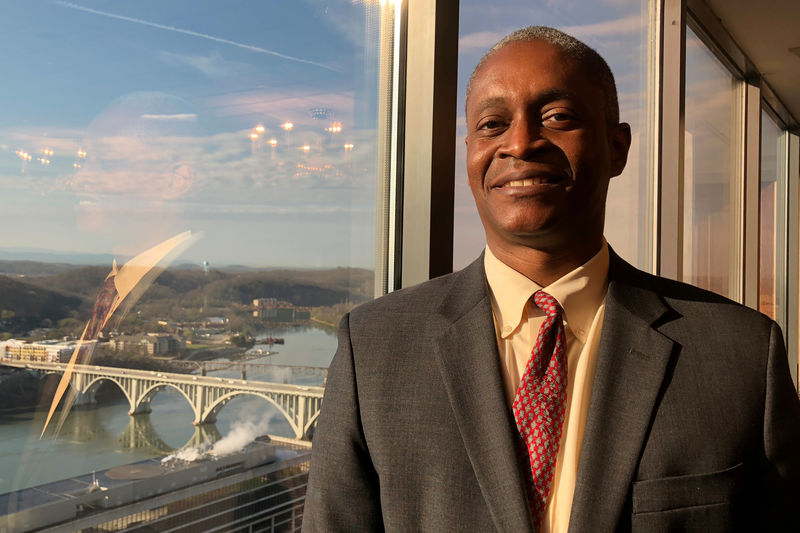 © Reuters. FILE PHOTO: Raphael Bostic President of the Federal Reserve Bank of Atlanta poses for a photo in Knoxville

WASHINGTON/SAN FRANCISCO (Reuters) – The U.S. Federal Reserve, deep into a cycle of rate hikes it hopes to continue into 2020, now faces emerging risks from abroad that could short-circuit its plans.

The threats are modest but growing, from the fragile state of some emerging markets seen in the collapse of the Turkish lira to a slowdown in Europe that could make the European Central Bank delay the expected start of its own rate increases.That would leave the Fed stranded as the only major central bank that is tightening policy, and in effect with three levers at once as it raises interest rates, cuts its asset holdings, and does so in a global environment likely to drive the dollar higher and make it harder on U.S. exporters.

“The geopolitics have been turbulent. The Turkish situation has been significant: the fall in the lira, the devaluation, has been fast, and the speed of that change caught a lot of folks by surprise, us as well,” Atlanta Fed President Raphael Bostic said on Monday in Kingsport, Tenn, though so far it is not enough to change his view the Fed should raise rates once more this year, given the boost he sees coming from fiscal stimulus.

“Right now we are still analyzing and assessing, but it is definitely something we worry about,” Bostic said.

Central bankers from around the world gather in Wyoming this week for an annual research conference focused on technical topics of market structure. But when Fed chair Jerome Powell addresses the group Friday the attention will be on a broader question: how long can the Fed continue raising rates if it’s the only dancer at the ball?

Smaller players including Canada and Britain have raised rates based on local circumstances.

But absent comparable moves from the Fed’s immediate peers — particularly the ECB — the Fed’s rate increases may bite more than expected. Higher U.S. rates and the strength of the U.S. economy will likely boost the dollar, putting U.S. exports under pressure and raising the risk of trouble among countries or companies with dollar-denominated loans.

(For a graphic on the Fed and the World, click https://fingfx.thomsonreuters.com/gfx/rngs/USA-FED/010072023JN/index.html )

The recent news from Frankfurt has not been encouraging, with slowing growth forecasts that may make it less likely the ECB would raise rates, as currently expected, beginning late next year. The International Monetary Fund’s recent global review concluded that downside risks were increasing even as the global economy continued to expand.

Since April the dollar has risen about six percent against a global basket of currencies, and the gap between U.S. and German 10-year bond yields has widened half a percentage point since the start of the year. The Fed is expected to raise rates at its September meeting and policymakers foresee a likely increase in December as well, an outlook traders share, according to data from the CME Group (NASDAQ:).

But in 2019 the paths diverge. Fed officials are penciling in three rate increases for the year and markets anticipating only one or two as the U.S. economic expansion trundles toward its 12th year of steady growth.

“Turkey by itself is not the problem. What it signals is you cannot have one central bank moving and no one else. Something will dislocate,” said Joe Lavorgna, chief economist for Natixis.

Fed policymakers watch overseas events closely but say they react only if global developments affect the U.S. economy. Still, that has historically given them a wide berth to shape their outlook based on what is happening elsewhere, responding not just to data but to changes in perceived risks.

The Turkish lira’s slide has little in common with the Thai baht devaluation in the late 1990s that preceded a larger crisis in emerging markets, or to the debt problems in Greece that raised the spectacle of the euro zone breaking apart. Both events raised direct risks to U.S. growth and financial stability and reshaped Fed policy in real time.

But Turkey’s problems, say some analysts, are another piece of evidence that the world is not as trouble free as it has seemed over the last year and a half. Over that period Fed officials, including some of those most hesitant to raise interest rates, spoke of economic “tailwinds” that let them lift rates in five of the last six quarters.

There are many other emerging markets, including Turkey, Iran, Russia India, Argentina, China, Chile and South Africa, that are “sitting on a ticking time bomb of U.S. dollar-denominated debt,” according to David Kotok, Cumberland Advisors chairman. In addition growth risks have rekindled in China; Europe’s suddenly poorer outlook could mean weaker world demand; and to top it all off the threat of a slide in global trade has been magnified by the Trump administration’s tariff threats.

The biggest international risk to the Fed’s rate-hike plans, said Northern Trust (NASDAQ:) chief economist Carl Tannenbaum, is an escalation in trade conflicts, especially with China. The second worry is a “bad Brexit,” fears over which could increase in early September with Britain likely to miss some key deadlines in its breakup with Europe.

Turkey, meanwhile, “bears watching,” especially if U.S. President Donald Trump’s distrust of international organizations leads the U.S. to block an IMF or other bailout there or elsewhere it is needed.

U.S. data so far, particularly 3.9 percent unemployment and annualized economic growth running at 4.1 percent, would seem to reinforce Powell’s comments at a July Congressional hearing that the American economy was on a solid footing.

But there may be more reason now to err on the side of caution.

“The outlook for policy is very uncertain right now,” as the Fed feels its way towards a ‘neutral’ interest rate that may be drawing close, said William English, a former head of the Fed’s Monetary Affairs Division and now a professor at the Yale School of Management. “Is there something significantly different happening to the U.S.? So far the answer is no. If Europe were to slow significantly and as a result of that kept policy highly accommodative…that could generate a response.”