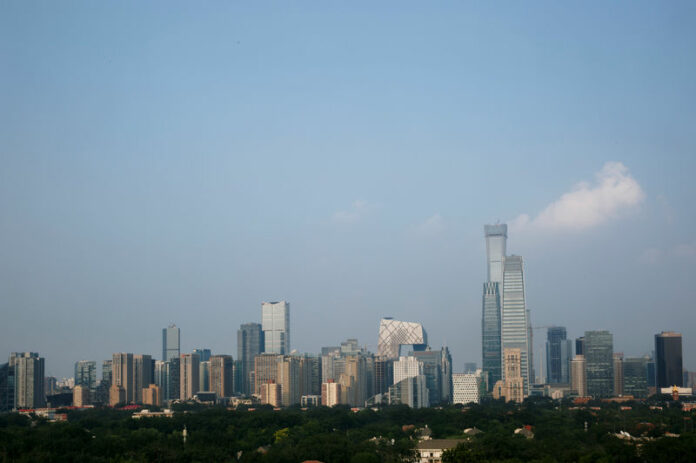 China warns investment may weaken further, to make ‘good use’ of fiscal policy

© Reuters. The skyscrapers of the Central Business District rise behind the capital’s embassy neighbourhood in Beijing

BEIJING (Reuters) – China’s investment growth, already at record lows, may weaken even further in future and authorities should step up fiscal and financial measures to give it a boost, the state planner said on Monday.

Beijing is urging more infrastructure spending as the economy faces both domestic and external risks, such as U.S. tariffs. But the benefits will take time to kick in, with analysts expecting the economy to get worse before it gets better.

Fixed-asset investment (FAI) in the first seven months of the year grew at the slowest pace on record since early 1996, after a long crackdown on illegal local government borrowing to finance vanity projects.

Moreover, initial investment approvals – an indicator of future activity – have dropped off sharply, the National Development and Reform Commission (NDRC) said in a statement.

The total value of such projects for which the NDRC has assigned a project code — an initial step in the approval process — rose just 3.1 percent in January-July compared with 6.9 percent in the first half of the year.

“The decline reflects the many barriers that our country’s infrastructure construction faces, and the stiff competition in low-end manufacturing while middle- and high-end sectors have relatively high bar for entry,” NDRC said in a monthly monitoring report published on its website.

Among these newly registered projects, the investment value of infrastructure projects fell 35.2 percent in January-July from a year earlier, with the drop most significant in sectors such as pipelines, railways and air and road transport. Growth in registered manufacturing investments slowed to 12.4 percent.

The slowdown is partly due to Beijing’s stringent debt curbs and efforts to reduce financial risks, the NDRC said.

New manufacturing investment projects in sectors ranging from tobacco and fur to petroleum and nuclear fuel processing all suffered a more than 30 percent fall.

In recent weeks, Beijing has told local governments to speed up the sale of special bonds to raise money for investments. Finance Minister Liu Kun told Reuters such bond issuance will blow past 1 trillion yuan ($145.48 billion) by the end of the current quarter.

Real estate has been the lone bright spot so far on China’s investment front, partly due to robust land transactions in smaller cities, with spending proving resilient to government efforts to tame hot property prices.

New real estate investment projects that obtained a project code rose a robust 38.1 percent by value in the first seven months from a year earlier, the NDRC said.