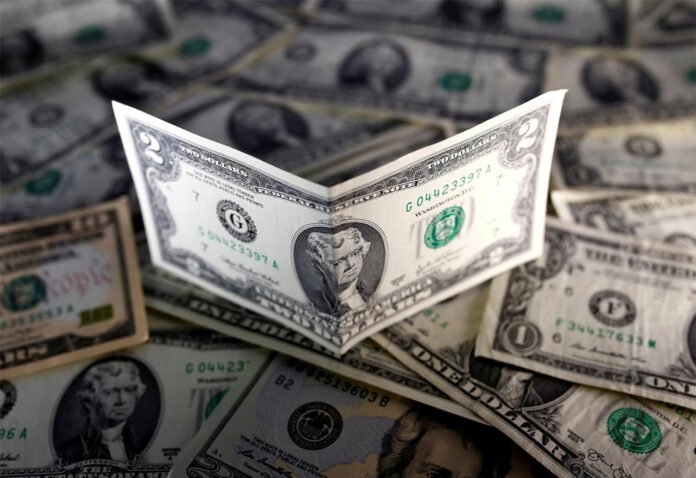 NEW YORK: The dollar fell for a second straight session on Monday, still weighed down by comments from Federal Reserve Chairman Jerome Powell on Friday that seemed to suggest a slower pace of monetary tightening.

Since hitting a more than one-year high in mid-August, the dollar has fallen more than 2 percent amid remarks from US President Donald Trump criticizing the Fed for raising interest rates at a time when the government was trying to stimulate the economy.

At a symposium in Jackson Hole, Wyoming, Powell on Friday emphasized the central bank’s push to raise interest rates despite Trump’s criticism of higher borrowing costs. But he also said the Fed sees no clear sign of inflation accelerating above 2 percent.

His comments did little to change market expectations for rate hikes in September and December and disappointed some dollar bulls hoping for a more hawkish message.

“The takeaway from Jackson Hole is that the Fed may not look to tighten much more than is currently priced into markets,” said Mark McCormick, North American head of FX strategy at TD Securities in Toronto.

“It is clear the Fed cycle is close to nearing the end-game,” he added.

Interest rate hike expectations have supported the dollar this year as the US economy tracked a stable growth path.

The Treasury yield curve on Monday reached its flattest since 2007 – a factor seen as reducing support for the dollar – in the wake of Powell’s speech.

In mid-morning trading, the dollar index, which measures the greenback against a basket of six major currencies, was down 0.2 percent at 94.97 after slipping more than 0.5 percent in the previous session.

Overall, financial markets showed a healthier appetite for risk as US stocks rose, curbing the US currency’s safe-haven appeal.

Adding to the risk-on mood, US and Mexican trade negotiators appeared close to reaching a common position on NAFTA, with Mexico’s economy minister saying an announcement was “probably on the agenda.”

The Mexican peso rose 1 percent against the dollar, which traded at 18.703 pesos.

In emerging markets, the Turkish lira weakened more than 2 percent against the dollar on Monday after a week-long holiday, hit by persisting concern about a diplomatic rift with Washington over a detained US pastor.