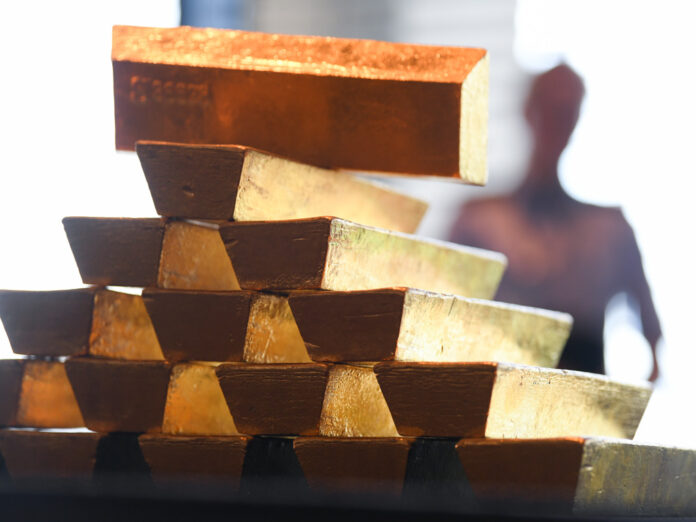 Gold hovers above $1,200 on weaker dollar as trade tensions ease

NEW YORK/LONDON: Gold gained above $1,200 per ounce on Monday as the dollar weakened after the United States and Mexico struck an agreement that lowers trade tensions.

Major currencies gained against the US dollar, which has been a safe haven from months of trade tensions.

The dollar index slid against a basket of six major currencies.

A weaker greenback makes dollar-denominated gold cheaper for holders of other currencies, which could boost bullion demand and prices.

“The NAFTA agreement is helping the (platinum group metals) a little bit. The PGMs seem to be pulling on gold and silver, too,” said Walter Pehowich, executive vice president of investment services at Dillon Gage Metals.

The United States and Mexico agreed to overhaul the North American Free Trade Agreement (NAFTA), putting pressure on Canada to agree to the new terms on auto trade and other issues to remain part of the three-nation pact. An agreement could ease concerns about an escalation in global trade tensions.

But prices remained capped as higher rates, even if they come at a gradual pace, raise the opportunity cost of holding gold, which can be costly to store and insure.

“Our reading is that we still expect two more hikes this year and that should be the important thing near term for gold … next year the Fed is still likely to continue hiking,” said Danske Bank senior analyst Jens Pedersen.

Gains in the Chinese yuan on Monday made gold cheaper for buyers in the world’s biggest gold consumer, providing some support for prices.

Below $1,200, the bearish trend could recover strength, with a first targeted support area at $1,180, he added.

Higher activity in gold options amid geopolitical tensions and a record-long bull market for US equities suggest that investors are betting gold prices have found a floor, traders said.