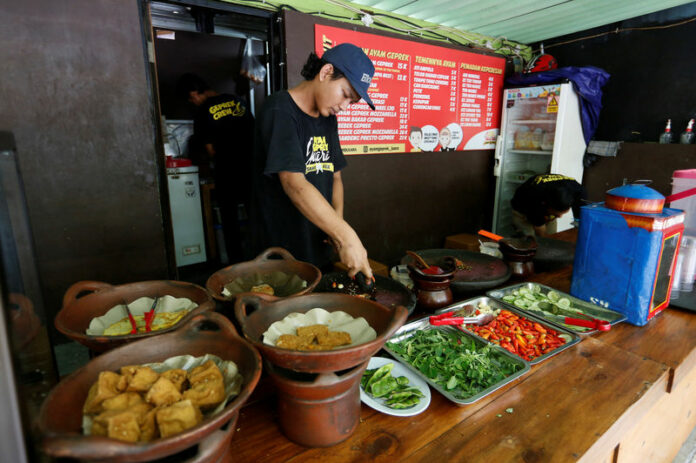 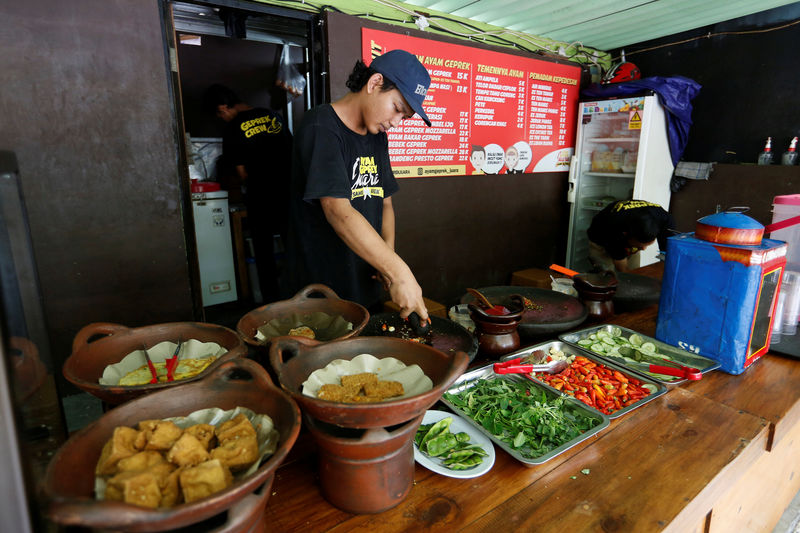 © Reuters. A cook prepares food at a restaurant which offers free meals for people who can show they have recently changed U.S. dollars for Indonesian rupiah at their outlet in Jakarta

JAKARTA (Reuters) – As Indonesia’s currency trades at its weakest levels since the 1998 Asian financial crisis, a local restaurant chain is offering free meals to clients who can prove they have exchanged holdings of U.S. dollars for the ailing rupiah.

While easy to brush off as a marketing gimmick, the restaurant’s online campaign “#bantaidolar”, or “butcher the dollar”, shows how alarm over the plight of the rupiah is becoming more mainstream in Southeast’s biggest economy.The rupiah, the second-worst performer among emerging Asian currencies behind India’s rupee, has shed 9 percent so far this year amid an emerging market sell-off triggered by rising U.S. interest rates and economic crises in Argentina and Turkey.”We want to raise the spirit of love in the nation and that is by loving the rupiah,” said Agung Prasetyo Utomo, founder of fried chicken chain Ayam Geprek Juara, which so far says it has given out 83 free meals for customers who had sold their dollars, describing them as “rupiah warriors”.

In Indonesia there is a particular sensitivity over sharp falls in the rupiah. The currency’s slump in the 1998 financial crisis triggered rampant inflation, food shortages and riots in Jakarta that led to the fall of strongman ruler Suharto.

Indonesia’s economy is in far better shape than in 1998 – the fall in the rupiah has been gradual, foreign debt levels are low and the banking industry has strong capital. And policymakers have been praised by analysts for responding to global pressures by hiking interest rate faster then any other central bank in Asia and taking steps to cut rising imports.

Nonetheless, they have only been able to slow the rupiah’s depreciation, and even with benign inflation right now – at 3.2 percent in August – prices of imported goods and those made using imported raw materials face upward pressure.

Prices of food containing imported dairy, beef and wheat are expected to be among the first to rise, according to research firm Nielsen Indonesia. Analysts have also said chicken prices could be affected through the increase cost for imported corn.

Rising prices, particularly of basic food, would bring the rupiah’s woes home to ordinary Indonesians and be a blow to the government of President Joko Widodo, who is seeking a second term next year. The opposition has already launched social media campaigns attacking the government’s economic management.

In July, President Widodo pleaded with exporters to convert their dollar earnings and his ministers have repeatedly met with businesses to make the same appeal.

While not all have listened, Ade Sudrajat, chairman of the association of textile firms, said this week his members had sold their dollars in the market for an amount equivalent to the six-month cost of wages and electricity.

Most economists still see inflation staying within Bank Indonesia’s 2.5-4.5 percent target range for this year and next, especially with Widodo capping fuel and power tariffs until 2019 in a populist pre-election move.

Still, in the Thamrin City shopping mall in Jakarta a shop assistant at a kiosk selling fragrance, soaps and beauty products said customers were already reacting to rising prices of some imported products.

If importers pass the tax cost on to customers, this could push up prices, although Indrawati predicted the inflationary impact of her measure would be minimal.

The government has also sought to widen the use of biodiesel to cut the country’s oil import bill.

At the top end of society, the government’s measures are also being felt after taxes were increased on many luxury goods.

For the niche business of selling supercars, higher interest rates, a weak rupiah and tax increases were making for a perfect storm, said Irmawan Poedjoadi, chief executive of McLaren Jakarta.

Poedjoadi said the government had targeted his type of business when the rupiah fell, even though supercar sales in Indonesia had been declining in recent years and now amounted to only about 200 vehicles a year.

He said two-thirds of the price a customer pays for a supercar was already tax, and he feared wealthy Indonesians would simply decide to buy and keep cars overseas.

“We only sell a small number, but we have employees and business chains, vendors to pay,” he said.