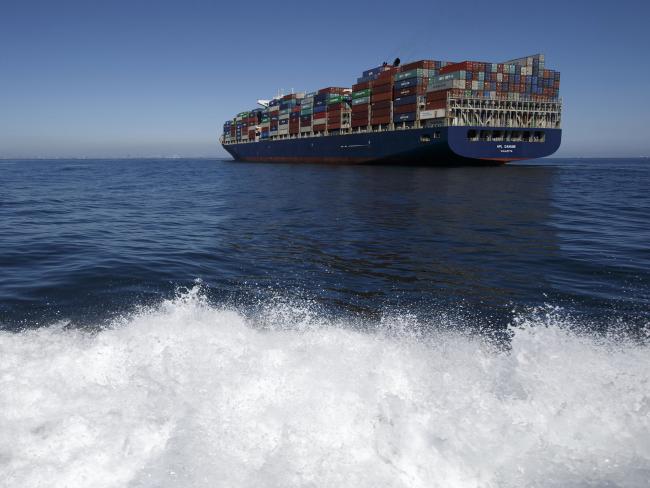 (Bloomberg) — President Donald Trump is raising the stakes in his gamble that the world will line up behind the U.S. to take on China over trade.

Trump said Friday he’s willing to slap tariffs on an additional $267 billion in Chinese goods, on top of duties of $200 billion in imports is already considering. The administration will act on the $200 billion “very soon depending on what happens,” Trump told reporters on Air Force One. “I hate to do this, but behind that there is another $267 billion ready to go on short notice if I want.”

If the president follows through, the threatened tariffs and those already in place would more than cover the value of all goods the U.S. buys from China, according to U.S. government data from last year. The U.S. imported $505 billion of Chinese products in 2017, Census Bureau figures show.

For the Trump administration, Friday began with sunny signs for the labor market before Trump’s hawkish trade-war rhetoric clouded the outlook. U.S. stocks erased gains after his trade-war rhetoric and headed for their first weekly decline in a month. The fell by 0.1 percent to the lowest in two weeks by 3:30 p.m. in New York.

“I don’t think this magnitude of tariffs has been priced into the markets,” Lara Rhame, chief U.S. economist at FS Investments, told Bloomberg Television in an interview. The strong performance of markets over the past few months “keeps getting disrupted by news on trade. It’s just another indication we’re not out of the woods yet,” she said.

Signs have been growing in recent weeks that Trump wants to focus his ire on China, which he has repeatedly accused of trading unfairly. The U.S. and European Union announced a trade truce in July, promising not to impose new tariffs on each other. Meanwhile, the administration has reached a preliminary deal with Mexico to overhaul the North American Free Trade Agreement, and has been negotiating around the clock with Canada for a new three-nation pact. The president earlier this week signaled an agreement with South Korea was close to finished.

White House economic adviser Larry Kudlow said Friday the U.S. wants to build a “coalition of the willing” to take on China that would include the EU, Japan and other allies. “The Chinese, you know, may find themselves more isolated if they don’t come into the global process,” Kudlow said in an interview with CNBC.

In a separate interview with Bloomberg Television, Kudlow suggested the president would be willing to meet with Chinese President Xi Jinping on trade, possibly as early as this month at the United Nations General Assembly. Kudlow’s comments indicated the U.S. is looking for a deal with China to end the trade war between the world’s two biggest economies.

But the president struck a harsher tone toward U.S. allies. Japan will have a “big problem” if it doesn’t conclude a new trade deal with the U.S., he said on Air Force One. “People have been saying, ‘I’m too tough on Canada,’” he said. “Look, Canada has been ripping us off for a long time. Now, they’ve got to treat us fairly.” Trump also on Friday reiterated threats to slap tariffs on auto imports, saying a tax on cars would be the “ruination” of some countries, including Canada.

U.S. businesses are warning that Trump’s trade gambit will inflict damage at home.

Apple Inc (NASDAQ:). noted in a letter that the government’s proposed tariffs on $200 billion cover a wide range of products used in its U.S. operations, including the Apple Watch. The disclosure prompted its shares to turn negative.

Levying duties on all Chinese purchases would hit “every aspect of our American lifestyle — so the clothes that we put on our back, the food that we eat, the cars that we drive, theshoes that we wear,” Hun Quach, vice president of international trade for the Retail Industry Leaders Association, said by phone.

More blunt about the impact was Matt Priest, president and chief executive officer of the Footwear Distributors and Retailers of America: “In one word, disaster. Punishing my children for the crimes of my neighbors seems like a ridiculous thing for all of us to think it would be effective.”

The U.S. has already slapped duties on $50 billion of Chinese imports since July, which spurred immediate in-kind retaliation from Beijing. China has said it would be forced to retaliate to all of the U.S.’s tariff measures, fanning concerns that a deepening trade war could dent the global economic outlook.

Some industry groups are reaching deep into their tool kits to block the tariffs. The administration’s proposed tariffs on $200 billion in Chinese goods may be vulnerable to legal challenge because they’re retaliatory in nature, rather than being a response to unfair business practices, the Consumer Technology Association said Friday.

While a case likely could be brought, legal challenges to such actions have not had much success, said David Gantz, who teaches trade law at the University of Arizona. Given the president’s broad authority under the trade act, Trump also could argue that the $200 billion, like the earlier tariffs, is really all part of the same enforcement package, Gantz said in an email.